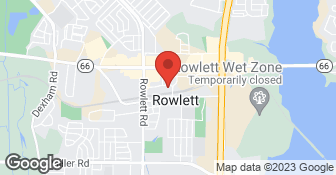 Description of Work
Complete update of our master bath - stripped wallpaper and took down popcorn then textured and painted, new custom vanity with marble top, new frameless shower with subway tiles and marble hex tile floor, new drop in tub with marble and wood surround, replaced carpet with 'wood' porcelain tiles, plantation shutter, custom mirror, and installed all fixtures. Michael and his team are terrific! Great communication throughout the project. There was a minor problem with the marble but he took care of it. Only issue was it took longer than estimated but probably due to the repair needed so not a big deal. Also the tile crew does a fantastic job - good attention to detail - but if you want to ensure the faux wood tiles are installed randomly, you may have to oversee and pick each piece like I did. :) Michael gave us a competitive price, didn't upcharge us, helped us think through some design decisions, and came with stellar recommendations. Very highly recommend.

We're still in the process of everything and so far their service has been excellent.

Description of Work
Michael G Morgan gave us a quote for a total remodel of our kitchen.

Michael was recommended by the granite installers to do the plumbing aspects of my kitchen remodel. I compared prices with several plumbing companies and he charged less. He came out promptly and did that work quickly and efficiently. I should have had the undersink cabinet repaired while the counters were out, but didn't, so that became more difficult since it was one large shelf with a 2-door cabinet that had a divider, and the shelf supports also needed to be replaced. He did a nice job for less than I expected. Then, I asked for a bid on redoing my dining room ceiling with had cracks in a couple of corners along the vaulting. He gave me a good bid, then sent out a team of drywall guys to do the work. They were 45-60 minutes later than expected, but knocked the work out in 2 mornings, including the painting, and it looks very nice. They put down paper to protect my tile and hardwood, used plastic drops to protect walls and keep the dust in that room, and cleaned up meticulously after themselves. Besides all that, Michael is pleasant and easy to work with, does what he promises, and gets in and out quickly. I intend to use him for future projects.

Description of Work
This time, I had my dining room ceiling redone - remove popcorn, repair cracks, texture & paint. Previously, I had him install new kitchen sink and faucets, and connect the plumbing after having counters replaced. He also rebuilt the inside of the cabinet under the sink where the shelf and supports had rotted out due to leaks over the years.

Our company was founded in 1987, and today, we’re still delivering top-quality heating and air conditioning repair services all across the DFW Metroplex.  …

Air Patrol AC specilizes in Residential and Commercial comfort systems. All our technicians are factory trained to work on your specific type of heating or cooling. Air Patrol AC offers some of the most comprehensive service plans to keep your AC and Heating units running more efficiently in the peak seasons, thereby saving you money. Keeping your AC and Heating units tuned to their optimal performance not only saves you money on your Gas and Electric bills but stops harmful wear and tear that can cause thousands of dollars worth of damage down the road.  …

Insured
All statements concerning insurance, licenses, and bonds are informational only, and are self-reported. Since insurance, licenses and bonds can expire and can be cancelled, homeowners should always check such information for themselves.To find more licensing information for your state, visit our Find Licensing Requirements page.
General Information
Free Estimates
No
Eco-Friendly Accreditations
No
Payment Options
Check, PayPal
Senior Discount
No
Warranties
No

Dallas Kitchen & Bath is currently rated 5 overall out of 5.

No, Dallas Kitchen & Bath does not offer free project estimates.

No, Dallas Kitchen & Bath does not offer eco-friendly accreditations.

No, Dallas Kitchen & Bath does not offer a senior discount.

No, Dallas Kitchen & Bath does not offer warranties.

Are there any services Dallas Kitchen & Bath does not offer?