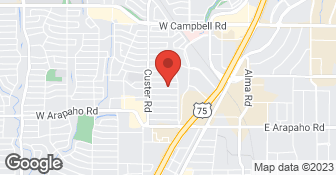 Incredible professional, knowledgeable, honest, and responsive! Ryan was able to get to my house with a couple days and helped me realize i didnt have a leak at all! I had another issue that was going to be much easier to solve. He spent about an hour troubleshooting and educating me in the hot sun and refused to let me pay him for his time because there was no leak and he didnt have to run any test. That is called integrity! He truly wants to help his customers out and he has a loyal customer in me and my family now. This is a team you can trust!

I literally can't recommend Ryan from RD Leak Detection highly enough -- I joined Angie's List just to review him! He saved us $6,500!!! He's a truly genuine human being, a professional in his field and very passionate about being fair to his customers. 1. When I called looking for a second opinion on a leak we had been quoted a $6500 repair bill on, he was honest about not being able to get out to me for nearly 3 weeks. 2. His price for a full leak detection was fair, and lower than others we'd been quoted, and in one case paid--I wish we hadn't wasted money on the other company 3. When he had a customer change schedule, which opened up an earlier availability, he let me know right away. We were loosing 2 inches of water a day, so getting the test done as quickly as possible was essential. 4. When the day scheduled was a downpour of rain, and he couldn't do the test, he came out that Saturday, first thing, instead. 5. He immediately found the epoxy at one skimmer to be damaged badly. He correctly believed this to be the cause of our leak. After repairing it -- and showing me how I could do epoxy repairs going forward, he finished off the dye test to show nothing else was leaking. 6. He talked me through the "leaks" the other company found (which they said would cost $6500 to fix), and explained how each was a scam. He provided logical demonstrations on how nothing they said made sense. For example, they said all 4 spa jets needed replacement, but he pointed out how our spa was full until the pool went down then it poured over into the pool--whereas if the spa was leaking, it's water level would go down first, then the pool afterwards. 7. Without throwing shade on the other company, he told me that we probably wasted our money on the skimmer replacement, because unless it was cracked in half from frost damage or ground shift, you should almost never have to replace a skimmer, just the plumbing underneath it. 8. He also pointed out that the epoxy around our skimmer shouldn't have gone out so soon (we had it redone when the pool was resurfaced 3 years ago)--and he said it was done well at that time. Bottom line: I wish I had contacted RD sooner, and will be using Ryan going forward, and I would highly recommend his services for any pool work that needs to be done.

Ryan was absolutely a pleasure to work with knowledgeable, honest and focused on our needs. He found our leak where others have failed and while I was bemoaning the cost of tearing up our yard he provided a second solution that actually cost him money but overall benefited our situation. WHO DOES THAT? Because of an initial scheduling snafu he didn't want to take any money in spite of the fact that he came out twice and his time is valuable. I pretty much had to force him to take some money. Again I ask WHO DOES THAT? I can't recommend highly enough and if you have trouble getting through stick with it they are worth it. Family owned company that really cares.

Ryan and Josh came out and began diagnosing the location of the leak immediately. They were incredibly thorough in their questions and in their investigation. They started with a dye test and tested all of the valves. Ryan even answered our many, many questions and even let us know that our salt system was salvageable. Overall, he went above and beyond and provided incredible service. I happily recommended RD to my boss the very next day. We are extremely pleased. We've seen our share of horrible vendors––and this one's a winner. Having called several vendors to diagnose our leak, RD was the most flexible and the easiest to work with, by far. We also love that they're locally owned and operated.

Description of Work
We noticed a tremendous jump in our water bill (~3-5K to 31K gallons) this past month and knew immediately that we had a leak––and needed leak detection ASAP. We noticed a fairly substantial water loss in the pool and worried that it was the pool, but weren't sure where to start.

Ryan came out and took a look and guessed that it wasn't really a "pool" leak, but rather that when my water level got high enough, the water backed up my conduit line for the pool light. He told me it wasn't a big deal and it could be sealed up when we next drain the pool (next spring probably have to re-surface). So, the leak stopped, and next time it rained, sure enough, it started leaking out of the conduit line, just like he had guessed. I did re-seal the conduit leak to stop the water from escaping (even though that wasn't really necessary). He charged me nothing and I will call him again, when I have a real problem!

Description of Work
I thought I had a pool leak - saw a wet spot in the yard.

Charged for the leaks, not for the extra time to solve the tough one. Cleaned up and left my pool in the best shape ever. Not one bubble or water loss and he even tested my skimmer lines so my whole pool is in awesome shape for less money than I planned. Pleasant, even when the going got tough, through heat and rain, this repair was fun to see because he took time to explain what he was thinking. Just a great experience.

Description of Work
My 25+ year old pool had an air leak and then developed a water leak so I called RD Leak on Thursday and they came out Monday. Found both leaks and one more, fixed them all, kept me informed, showed me what they were doing and talked about each phase even when one leak proved difficult.

I was pleased with the professionalism and knowledge demonstrated by Ryan. He quoted an initial price of $250 to come and diagnose problem. His final charge after repairing the leak was $250. He was readily available to schedule an appointment; arrived in a timely manner even though it was about an hour drive from his usual general service area. He was able to readily determine the nature and location of the leak and initiate a repair on the same visit. He called the next day to check on the status of the repair. I was able to report that no further evidence of a leak was evident. I never write reviews. This is my first one. I never write reviews for poor quality service or average to good service probably because my standards are high. I have to be exceedingly impressed to be inspired to write a review but I was so impressed with Ryan's service and his integrity that I decided to write my first review ever. I would recommend RD Leak Detection without hesitation.

Description of Work
Ryan Dennis, owner, tested all the plumbing for the pool and repaired a leak that only required epoxy.

I live in a portion of the Metroplex where the soil is constantly moving. So unfortunately, cracked pipes and leaks around our swimming pool are not a new problem to me. In the past, I have used a leak detection company that did a good job, but was very expensive. In both prior occasions, the same technician, Ryan did the repairs. So, last week when water started leaking out from under my pool decking again, I called Ryan's cell phone. He answered right away and I was very glad to hear he had started his own leak detection and repair company. He gave me a very fair price quote for the job on the phone and came right out to the house two days later as promised. As in the past cases, Ryan worked quickly and efficiently to repair the leaks. I stood with him the whole time watching the repairs. You can tell he is a real pro with lots of experience. It was a super hot 100 degree day and he was working on a concrete deck, but he got the job done efficiently and promptly. He knows pool plumbing very well. He helped me identify all the pipes that were visible after the dig and explained how the water was being routed. He also knows the valves at the filter very well and was able to test and double check all the other connections and plumbing with various value settings. All in all, Ryan is my go-to guy for any leaks we have in the yard. While I hate it that our property is plagued with these issues, it is at least comforting to know that when a leak occurs, Ryan will be able to find it and fix it for me for a very reasonable price.

Description of Work
Ryan fixed leaks in PVC pipes that are associated with our swimming pool under the concrete deck.

I've used three other leak detection companies in the past and am very satisfied with the service Ryan has provided. I called Ryan on a Thursday, he ran some tests on Friday and Saturday, and completed the repairs on Saturday. Of all of the people who have worked on my pool, he is the most knowledgeable and may suggest multiple ways to do the repair so that the homeowner can decide whether they want a repair that is more economical or one that may be a little more expensive but may be less prone to leaks in the future if the ground shifts.

Description of Work
Ryan and Jase detected and fixed two leaks in my pool.

America's Swimming Pool Company of Dallas (ASP of Flower Mound) is a swimming pool service company which has been in business for over 30 years. They are now expanding. ASP - Flower Mound is a full service swimming pool company. We specialize in weekly maintenance service, pool repairs with licensed, and insured repair technicians and pool renovations. We have several sub contractors who have been carefully selected over the years. We are committed to providing resort quality service; "your pool is our passion". We are a Certified Environmentally Responsible Contractor - CERC Certification # 941985.  …

RD Leak Detection is currently rated 5 overall out of 5.

No, RD Leak Detection does not offer free project estimates.

No, RD Leak Detection does not offer eco-friendly accreditations.

No, RD Leak Detection does not offer a senior discount.

Are there any services RD Leak Detection does not offer?