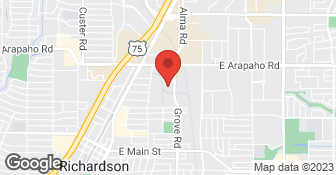 Juan's team was very prompt and worked hard. They cleaned up each night and didn't leave the place a mess. We had purchased the stone from a local vendor and Juan cut and installed the stone. It was a difficult project because the stone around the mantle had to be cut individually and laid. We nearly ran out of stone but the stone mason was able to use some of the stone from the swatch and blended it into the rest of the fireplace. I am so in love with my fireplace! I find myself staring at it all day! I'm glad we waited until we found the right contractor. Now the team is remodeling the laundry room. .Can't wait to see how that turns out!

Description of Work
Stone work on fireplace and is in the process of remodeling the laundry room and patio.

The job was done in a timely manner, and I am very difficult to please so some things took longer because I was not pleased with the original choice I had made. The contractor, Juan, was accommodating and in many instances there was not an extra charge. Again I will stress I can be very difficult when I know what I want and I must say at no time did I feel that Juan was less than professional in his response to my request. After most of the job was finished Juan did a walk through and pointed out things that needed to be corrected and sent people to make the corrections.

Description of Work
We had a complete remodel of our home. New lighting, bathtub removed in one bath and shower installed. This was a total makeover. The patio had flagstone installed/

I would not recommend using Ascencio's Contracting. Juan, the owner, doesn't communicate well at all--several items that I had clearly explained in emails and texts were completely ignored. Juan does not show up on time half of the time. The worst thing, however, is that I believe he under-bid my job (maybe to win the bid) and then he later started adding line items and revising his invoice with things that were clearly in the original contract and on paper. I had to fire Juan halfway through the job and get someone else to finish up. Don't waste your money or your time on this contractor

Description of Work
Mediocre quality. Had to come behind his workers several times to get them to correct quality issues. They didn't do a good job isolating their work from the rest of the house--I got paint splattered all over my furniture and hardwood flooring. The texture on the walls did not match the existing texture, the paint color did not match and they broke a plumbing fixture because they put their ladder on some pipes and then climbed up the ladder. Juan, the owner, kept trying to jack up the price of the job by "revising" his invoice with things that were clearly included in the original written and signed contract. It really seemed to me that he had under-bid the job (maybe in order to win the bid) and then he was scrambling to make up some money on the job. His spoken communication skills seem to be fine, but things that I would send an email or text about, he would get completely wrong or simply ignore them. I had to fire Ascencio's Contracting halfway through the project and get someone else to fix the problems his workers caused. I DO NOT RECOMMEND THIS BUSINESS FOR ANYONE TO USE!!!!

ascencios don't know who (member) is , ascencios contracting never did any work on this address

FINE FINISH PAINTING is locally owned and operated out of the Plano, TX area. We offer Interior and exterior painting services and We know what it takes to get your home back in shape. We also offer kitchen cabinetry refining and we strive to give our customers the best service possible. We are a small, family-owned business so we can provide the attention to detail that those big chains can't offer. Our staff will leave you feeling good about opening your front door every day. We offer free estimates and would love to hear from you soon. Please call or text for a free estimate today  …

How is Ascencios Contracting overall rated?

Ascencios Contracting is currently rated 4 overall out of 5.

What days are Ascencios Contracting open?

No, Ascencios Contracting does not offer a senior discount.

Are warranties offered by Ascencios Contracting?

No, Ascencios Contracting does not offer warranties.

What services does Ascencios Contracting offer?

Are there any services Ascencios Contracting does not offer?