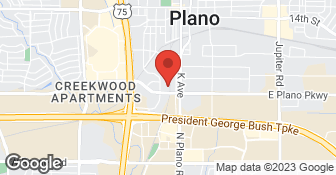 Came out first time. Repaired everything on video inspection. They did not do a thorough job so had them come back out and fix their errors. Then about two weeks ago with the rain It started leaking in our house in two spots. The leaks are coming from areas they supposedly repaired. Had them come back out and inspect, tarp due to more rain coming and fix. They came out and did not fix, did not tar...

DESCRIPTION OF WORK
Ought new house. Had video inspection done and had them repair all issues found.

After several major storms, my roof needed to be replaced. My insurance company would be covering the repair less my deductible. The Triumph Roofing salesman gave me a presentation about the roofing process and materials. He told me that their charge would be the full amount of the insurance company's estimated cost of repair. When asked about a lower price, he stated that they could not charge le...

Triumph Roofing was recommended to me by my neighbor, who hired them last year to re-roof her home. Overall, the various phases of my project went very well. It took longer than initially anticipated due to bad weather, holidays, and some original materials were no longer available. Triumph worked with me from the very beginning of the process, from advocating for me with the insurance company to ...

It went okay. It took longer than expected due to an unexpected rain storm that caused the workers to feel sick. It was during a time that everyone was getting their roofs done after a terrible hail storm. Triumph Roofing did as well as they could considering how extremely busy they were.

DESCRIPTION OF WORK
They replaced my roof, gutters, window screens, and storage shed skylights. Re stained my deck.

Salesman Clint was a nice guy and I feel trustworthy, but the job itself was a folly.   I had a leak over master bath with the old roof that I was assured would be fixed with the new roof but it's actually worse now.  The billing, although resolved in the end, was a little bit weird because my insurance received invoices for repair work that was not completed by Triumph.  The crew they sent out wa...

DESCRIPTION OF WORK
Replaced my entire roof after hail storm

We are an all-inclusive roofing company. We can handle any needs for your home or business including but not limited to roofing, siding, gutters, painting, fencing, decks etc.