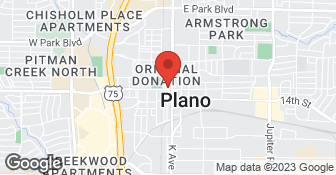 Owner Jeff Ramsay started Ramsay Roofing & Construction back in 2013. We are excited to announce our rebranding as 99 Roofing. 99 Roofing can handle all residential roofing work and specializes in residential repairs/replacements. With over 20 years experience in roofing/construction we pride ourselves in our ability to take care of our customers and provide outstanding exterior restoration services. On residential roofs we repair and replace asphalt shingles, wood shake, tile, and slate. We also can take care of the following exterior items for our customers: siding, gutters, fence, exterior paint and stain. Call us today for a free estimate and our 99 point property evaluation!  …

If you were in the line of the storm we can help! Phones answered 24/7. Please call 972-596-8313 to schedule your FREE ESTIMATE. Established 1981 and serving DFW with distinction and integrity for over 38 years. Locally owned and operated, we are proud of our work as commercial and residential roofing leaders. Our commitment is simple: setting new standards of quality, integrity, customer service, expertise and value. We can handle any and all of your roofing needs and are GAF Master Elite certified roofing contractors, an honor held by only 3% of roofers nation wide. You can trust us to help you with everything from roofing repairs to installing the most elaborate roofing products and styles. We are sure you are going to love working with us and we know we will love working with you. Give us a call for a FREE ESTIMATE and experience the Swan Difference. While our office hours are 8:00-5:00, our phones are answered 24/7, to always be available when you need service.  …

18 MONTHS FINANCING AVAILABLE - NO INTEREST - NO PAYMENTS (Request Quote for details) Over 24 Years Family Owned and Operated in North Texas! Voted TOP 10 in Texas 2021 by Qualified Remodeler and Guild Quality for Customer Satisfaction. Call Today. Free Estimate. Free In-Home Consultation. Our Project Consultants will love to show you the difference that Phillips truly makes on your needed improvements. Financing is available. We Thank You for choosing our services!  …

I don't remember the price. I am not sure if I would use them again in future.

Golden Touch Gutters came out and removed my gutters before I had my roof replaced. I explained that I would like to have the house painted before the new gutters went on, Jessie said no problem, he gave me his cell phone number and told me when I was ready for them to come out to give him a call.Two weeks later I gave him a call on a Monday and they were out that Friday. They proceeded to remove my existing gutters while making sure they didn't damage my landscaping. After I had the house painted, I called Jessie to comeback out and asked about having screens placed on the new gutters. To make a long story short not only did they do a fantastic job putting my gutters on with screens but he charged what most companies charge for just plain gutters!