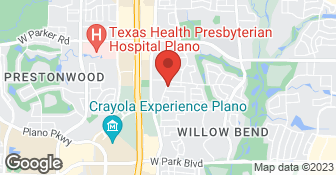 Elite Tree Service has been helping Plano, Dallas and the surrounding areas with their tree service needs since 1976. Owner, Brent Vaughan is an ISA Certified Arborist (#TX-3589A), a Texas A&M graduate and has been President of the company since 1995. We only hire employees with a minimum of 10 years of experience pruning and removing trees, and we carry a $2 million general liability insurance policy for the protection of our customers, as well as workers comp. We have an A+ rating with the Better Business Bureau. We have crews covering Dallas, Plano, Richardson, Frisco, Addison, The Colony, Farmers Branch, Coppell, Irving, Garland, Carrollton, Lewisville, Grapevine, Flower Mound, Highland Park, University Park, Allen, and McKinney....

He did a good job in cutting trees. They also pick up the trash but they damage my fence and kinda loose it is because of too much brushing. They loaded too much against my fence that made it came off.

Brent was excellent and his crew wonderful.

It wasn't cheap. We have a lot of trees. They did fine, but for the cost of the work, I would probably look around. I wasn't unhappy with the work, it was just expensive. The quality was great. The responsiveness was really good. If the prices were different, I would use them again. They did a really good cleanup. I would suggest people to talk to them.

I used this company a little over a year ago and was happy with their work. This time I called them 3 times and emailed them once and couldn't get them to call me back. Are they still in business?

There are azalea bushes around my tree that I wanted to save. Elite was able to remove the tree, hauled away debris, and grind the tree stump without harming the azaleas. The price was fair, and the service was professional. Couldn't ask for anything more.

I didn't use them this time but I would definitely next time.

Description of Work
I have used Elite Tree Service in the past. This time, I thought I needed to get some tree trimming done. They came out and explained that I could go another few seasons without the service. They are honest and provide exceptional service.

We've had Elite do minor work (tree trimming) for us in the past and were satisfied with their work. However, in September 2011, we called and scheduled them to come out and provide a quote to remove a dead tree from our yard. They came out promptly and did so. The price seemed fair, so we scheduled the work for the following week. They didn't show up and didn't call. About three weeks later, Brent called to say someone would be out that day to do the work. When told that we'd hired someone else to do the job since they hadn't shown up or called, he sounded surprised and was not at all apologetic.

Description of Work
Tried to have dead tree removed from yard.

I originally submitted a request to be contacted via their website on 6/12/11. A week later, I hadn't heard back so on 6/20/11, I called the main number and left a message with the answering service. Adam called me back a couple of hours later, saying he was going out of town and couldn't come to my property to do an estimate until the following Monday (6/27/11). I thought this was strange, but I had used Elite to trim my trees in 2006 and they did a great job, so I agreed to wait. After thinking about it, I changed my mind and contacted another company, who came out the same day to provide an estimate. I then called Elite's main number and left a message to cancel the Monday appointment. Apparently, Adam didn't get this message, because he called me the following Tuesday afternoon (a day AFTER he thought he was supposed to do the estimate) and said not to worry, he would get to my property in a day or so. I'm glad I decided to go with another company, or I'm sure I'd still be waiting. I don't know if the company is under new management, but the experience I had in 2006 was entirely different.

After calling Elite's phone service I received a call back within a couple of hours. Arrangements were made for them to come to my house on Monday to give an estimate for several trees to be trimmed. After waiting all day, at home they did not turn up. I called them the next day and they said they would come out on Wednesday morning. Another waiting game with no one and not even a phone call to let me know they were unable to come. Very bad customer service. Quite a waste of my time.

Description of Work
Estimate for several trees to be trimmed.

This crew were artist, and did an Excellent Job. I observed them doing an Excellent job trimming my neighbors live oak trees (15ft tall). I liked it so much I asked them to give me an estimate on mine, which was quite reasonable, then scheduled the service. They showed up on time trimmed the Tree, mulched the trimmings and cleaned up their work/ trimmings. I would recommend them to any body wanting a Great looking Tree, regardless of size.

Description of Work
They Pruned/trimmed a 30 foot tree with efficiency & professionalism.

Channell Lawn & Landscape is here to help you achieve and maintain a beautiful outdoor area. We’ll help you keep your lawn green, healthy, and sprawling with life. We can also beautify your yard by adding landscape designs like stone borders. We always leave the customer with a smile on their faces. We serve commercial and residential clients in Rockwall, Texas. Get in touch with us for a free quote or estimate!  …

Hello, my name is Michael flores CEO of green care landscaping design. Me and my crew focus on making your dream landscape possible and affordable. We make sure all our costumers are happy with results and happy with green care.  …

Insured
All statements concerning insurance, licenses, and bonds are informational only, and are self-reported. Since insurance, licenses and bonds can expire and can be cancelled, homeowners should always check such information for themselves.To find more licensing information for your state, visit our Find Licensing Requirements page.
General Information
Free Estimates
Yes
Eco-Friendly Accreditations
No
Payment Options
Visa, MasterCard, American Express, Discover, Check
Senior Discount
no
Emergency Service
Yes
Warranties
No

Let us help you with your tree service needs including pruning, removal, cabling, fertilization, emergency care and lot clearing.

ELITE TREE SERVICE is currently rated 4.3 overall out of 5.

No, ELITE TREE SERVICE does not offer eco-friendly accreditations.

No, ELITE TREE SERVICE does not offer a senior discount.

No, ELITE TREE SERVICE does not offer warranties.