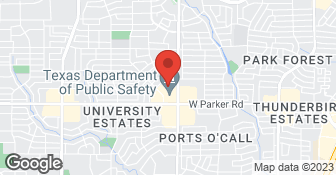 MAN AND WIFE . SLOW . NO CLEAN UP. WORKED LESS THAN 6 HOURS PER DAY.

Description of Work
REPAIRS TO DRY WALL IN GARAGE.

Everything went well. Patio was taken down and the debris set out for pick up. Freezer was moved to where I needed it. Storage shed door was repaired. It needed something to keep it from leaning down to the left so an adjustable tension cable was placed on the door and weather stripping around the edges of the door

The work was terrible. The knobs were installed but are not level with each other on the same cabinet. Some cabinets needed a smaller screw, but instead of telling us that a smaller length screw was needed, he just installed the knob - I now have to go to Home Depot to get smaller screws and swap them out. When he installed the peep hole, he splintered the wood on the outside of the door. He should have drilled a pilot hole and then used the circular bit part of the way through on both sides. This would have prevented the splintering. The pictures and mirrors were hung okay. The clocks were hung, however a bolt was used to hang one clock. As a result, when you attempt to open the clock door, the clock falls off the wall. I went to Home Depot and got a washer which solves the problem. He or his worker cracked the ceiling wall board when they were prep'ing for the attic flooring installation. After some discussion, he finally agreed to get his company plasterer out to fix it. The ceiling fans were the end of using this contractor. Of the 8, he installed 1 completely wrong - said it was a problem with the fan; we made him re do it and it worked. He put together the 2nd one wrong and when we told him he said he wasn't going to fix it. The 3rd one now flickers when you turn on the light. When he got to the 4th one he decided he wasn't making any money on this (and said as much) then stormed out of the house refusing to do anymore fan installations after he put the light fixture back up. When he put the light fixture back in, he said that the light was broken and we had to point out to him that it worked when he just took it down. He finally got it working, however he left the finial off. During the ceiling fan installation he blew the breaker switch several times. This was when we fired him. The contractor constantly lost his temper and yelled about the fans and everything else. When he orignally bid the project we told him several times that Hunter Fans were difficult to install and he might want to up his bid.

Description of Work
Repaired a fence gate that did not close after foundation work had been done on house.

We were satisfied with their service, but we haven't used them in a long time. The price was very reasonable.

Description of Work
I used Andy OnCall Handyman Service. They replaced a Formica window seal with a wooden window seal.

I think very highly of them and I would use their services again. They were reasonably priced, knowledgeable, and professional. I believe the value was even better than the price.

Description of Work
Andy OnCall Handyman Service came out and did some work for me.

They've done services twice and I've been very happy both times. I called them one other time for a quote but it turned out to be high so I didn't use them for that particular project. They were helpful and did a very good job. They were not quite as knowledgeable in where to purchase some items in the area and I had to help them do that but it wasn't a big deal.

It was good. I had a good experience with them. I remember thinking the price was a little bit high.

Description of Work
I used Andy OnCall Handyman Service to install faucets for me in 3 different places.

They were very good. I have no complaints. I had no problems at all. They did everything that we asked them to do and they did it well. The pricing was reasonable for the work that we were having done. They were prompt. When they said they would be here, they were here. They did the job that we hired them for and did it well. We were very pleased.

Description of Work
We used the services of Andy OnCall Handyman Service. We had some closets that weren't working right so they fixed those and then we had a wooden pillar at the front of the house that kind of came off its foundation a little bit so he fixed and stabilized it. Then we had a part of the outside of the house that had kind of gotten weather beaten and so he replaced that and repainted it.

Specializing in WATER MITIGATION, FIRE AND SMOKE REMEDIATION! We always guarantee your satisfaction and won’t leave until the job is done right. We take pride in ourselves and on the quality work we provide, while always delivering great customer service! Check out our services offered, then call --or-- click to schedule today!  …

Tru Blu has been one of the largest pool renovators serving the Dallas/Fort Worth Metroplex for 28 years! We DO NOT service pools, build pools, or sell retail like many other companies. We are a “Tru” renovation specialist, specializing in new plastering, tile and rock work, and deck resurfacing and pouring. Pool renovations is not one of the things we do, it is the only thing we do. Tru Blu is family owned and operated. You will have the owner's personal cell phone number should you need anything before, during or years after the job is completed. We offer quality work at a reasonable price. Why call a jack of all trades when you can have a specialist? Call now for a free estimate.  …

Andy OnCall Handyman Service is currently rated 4.3 overall out of 5.

No, Andy OnCall Handyman Service does not offer eco-friendly accreditations.

No, Andy OnCall Handyman Service does not offer a senior discount.

Are there any services Andy OnCall Handyman Service does not offer?