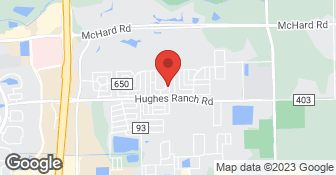 Went very well, Called Sunday evening and they responded and scheduled for Monday at noon and that is when they showed up. The guys were polite and professional, but I wish I could have had a little more input into the brand of water heater installed. Nothing wrong with the one used but I would have been willing to pay a little more for a higher quality unit. I essentially paid about $1000 for the labor and expertise which is about what I expected.

We recommend him weekly.

Description of Work
We use him for plumbing needs.

Big John was great. He called right back and I scheduled an appointment for a Friday. My disposal started backing up and I called him to see if he could come a day early and he was here the next morning! Replaced the disposal with the one I had bought previously. They are fast, professional, friendly. Will definitely call Big John for my future plumbing needs!

Description of Work
He and his crew were on time and professional.

Description of Work
Price was right and work was done as promised.

I contacted John because I had disconnected my refrigerator to move it and the water spigot was leaking. I left him a detailed message and he called me back within 5 minutes. He told me he was too booked for that day, but recommended someone else who could probably help me right away. John texted me a message with the contact information. His recommended plumber was able to get out within two hours and take care of the problem right away. John was such a professional because he still found a solution to my problem rather than saying he was too busy.

Description of Work
I contacted John because I had disconnected my refrigerator to move it and the water spigot was leaking. I left him a detailed message and he called me back within 5 minutes. He told me he was too booked for that day, but recommended someone else who could probably help me right away. John texted me a message with the contact information. His recommended plumber was able to get out within two hours and take care of the problem right away. John was such a professional because he still found a solution to my problem rather than saying he was too busy.

Description of Work
Had a water heater replaced. I've used Big John every time I've had plumbing issues & wouldn't use anyone else. His company is top notch.

Big John is extremely easy to work with and even swayed us away from installing a shower kit that we picked out because simply updating our current one would have been cheaper and a much better project. They arrived on time, were extremely fast working, and cleaned up everything. He'll definitely be our go-to plumber for future renovation projects and we'll recommend him to our friends!

Description of Work
Big John's installed an updated trim kit in our upstairs bathroom, two new stops under our downstairs bathroom sink and fixed the emergency water shut off valve in our garage. We had him purchase the parts which were around $250 and labor was around $245.

The quality of he work is great. He is good, honest, responds quickly to phone calls and when he can come out. He has been very good about helping me over the phone with things that I can fix myself. Which is a big plus!

It went well. It was an emergency call, I busted the pipe and was able to turn the main water line off, however water continued to drain from the busted pipe. While talking to Big John on the phone he explained that there was water in the line and that it waould continue to drain until all of the water was out of the waterline. He suggested that I turn on some of the other facets in the house to help release the water. At first I turned the one on in the sink of the bathroom with the issue, that was a bad idea, because water started flowing from the busted pipe at a fast rate and I ended up with a big water mess again. So I went to the kitchen and turned the water on in the sink and water started flowing from the facet, thus draining the line and the water stopped draining from the busted pipe, by this time Big John has arrived to fix the problem.

Description of Work
repair a broken pipe in my guess restroom

The plumber arrived early had to cut out some dry wall to get to the pipes from the other room and had to go to Home Depot to get a panel to cover where he had cut out a piece of the drywall. It looks good and I will replace the drywall at a later date. The panel he got to cover the area looks great. Jose' was very nice. I do not know anything about pricing, but I am happy with the work.

Description of Work
I had purchased a 3 piece set for my shower. It was a shower head, water handle, and faucet and hired this company to install it.

He was on time,and called before he came out with his assistant. They had on company shirts, and a clearly marked van. They went right to work (no wasted time at all) replacing the faucets, and adjusting the toilet. Two and a half hours later all of the work was completed and they had me check the fixtures for fit and function.

Description of Work
I purchased three new bathroom sink faucets, and shower control, and bath fixtures and he installed them and also corrected a problem with my toilet.

He replaced a valve connecting wall pipe and dishwasher hose. He carefully checked potential leak by running dishwasher and made sure no issue there. Good quality job and competitive price. Job well done! Thanks!

Description of Work
I have used Big John's twice in the past (Just learned today he is on Angies list). He was very responsive and reasonably priced. The first time he removed a gas grill from my back yard. The next time he checked on a leak in my lawn. Today I called for an appointment due to a bathroom water pipe making noise. He was able to give me advice over the phone to try to solve the problem. I tried it and it worked! I am really impressed with Big John! Will certainly recommend and use in the future for any plumbing needs.

Reasonable price, made an appointment that week, was professional, and did a good job.

Overall it went well. I thought their was still a leak the next day but it was only ground water that had run into the hole. The plumber came back out anyway and drained the water. He checked 15 minutes later and no more water was in the hole.

Description of Work
The water line leading into the house had a leak in the PVC coming from the curb. The plumber cut the PVC and put in a new piece where the copper line from the house met the PVC. I had already dug the hole to expose the leak. The plumber drained the water from the hole and dug a little more to give room at the copper connection.

Since 1983, the Collins family has served the plumbing needs of the communities of Pearland, Friendswood, League City, Alvin, and Clear Lake with pride and an exceptional level of excellence. The 1-800-PLUMBER® + Air team has the expertise to meet your needs with an easy to remember name and phone number, so call us today for help with all your home or business plumbing, drain cleaning, and heating and cooling needs.  …

With roots going back five generations and levels of experience that have bigger companies looking over their shoulders. Our family at Beacon Plumbing represents everything a service company should strive for  …

Abacus Plumbing, Air Conditioning & Electrical's Motto is "You Can Count On Us!" Honesty and Integrity are hallmarks of the Abacus business philosophy and are the foundation upon which the company was founded. Abacus serves well over 35,000 homeowners every year (and growing) while maintaining a solid reputation with customers. All technicians are background checked, drug screened, licensed or certified, and fully trained for their respective trades. Abacus Plumbing was founded in 2003 and has become one of the most reputable, largest local Plumbing, HVAC and Electrical companies in Houston, TX with well over 100 employees. You can count on the analysis of your plumbing, heating and air conditioning problem as well as their recommendations and the quality of the work. Abacus offers a 100% Customer Satisfaction Guarantee on all work and offers best-in-market product & installation warranties .  …

Big Johns Plumbing LLC is currently rated 4.9 overall out of 5.

No, Big Johns Plumbing LLC does not offer eco-friendly accreditations.

No, Big Johns Plumbing LLC does not offer a senior discount.