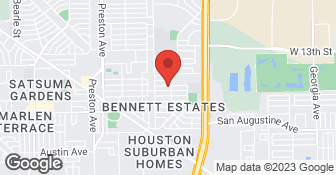 I remodel bathroom bedroom and hole house remodeling. We guarantee your satisfaction and we won’t leave until the job is done right. We pride ourselves on the quality work we provide, while delivering great customer service! Check out our services offered and call or click to schedule a free estimate today.  …

With over 30 years of remodeling experience, we are here to help you with installing Aluminum Awnings / Screen Rooms Independently owned.  …

Description of Work
Facia, and sofit - contractor of roof replacement

Both bathrooms look great! I had some rot in my small bathroom, they fixed this, redid the shower, put in new tile in both bathrooms. They painted both rooms and my closet. They put in a great new vanity in both bathrooms, I only had a sink. It looks great. I just wish I could show you the before and after on both. Harry and Virginia were really helpful in picking out colors (I am not good). They have very good tastes. They went so far as putting in new towel fixers, bathrobe fixture and several other small details that I did not think of. They went way above what I expected. They are both very professional and I really enjoyed working with them.

Description of Work
Redid both my 2 bathrooms.

Thank you [Member name removed] for the job and your review. It was a pleasure working for you and getting to know you. We will keep in contact now as friends instead of workers.
5.0

A week ago we had all the water pipes in our house replaced. The plumbers did a great job but they did have to cut holes in the sheet rock in a number of rooms to install the new plumbing and those holes had to be repaired and painted. We knew that would have to be done so we hired Harry's Carpentry to do the job. They came on Monday to assess the job and give us an estimate. They began patching all 11 holes on Tuesday and they came every day to float and tape the sheet rock that they replaced, they also textured where it was necessary. We provided the paint because we had paint leftover from the last time those rooms were painted, but Harry and his crew did the painting. The walls look great, you can't tell there were ever holes cut there. They really did an excellent job. While Harry was repairing the sheet rock under the kitchen sink, he noticed some water leaking and at first we thought we would have to call the plumber back out but he and my husband determined it was coming from the garbage disposal. When they turned it on it leaked really bad. Since we needed to replace it, Harry went with my husband went to the store to get one that would match up to the fittings for the old one. He replaced it the same day. it works great. They do a great job, they are on time and do what the say they will do at a fair price. They even went the extra mile with the garbage disposal. There are other things we want to have done and we will certainly use Harry and his crew to do them.

almost all remodeling and/or repair from ground to roof