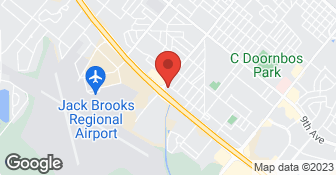 We are a locally owned and operated company that offers 24 hour service. We offer cooling, heating, ventilation, refrigeration, plumbing, appliances and home remodeling. We offer professional installations, whole house filtration systems, maintenance contracts,competitive rates and financing. Feel free to call our office with any questions. We look forward to having you as our customer....

I have 30 years in painting. I can do commercial and residential and inside and outside. Also I can do industrial painting. We guarantee your satisfaction and we won’t leave until the job is done right. We pride ourselves on the quality work we provide, while delivering great customer service! Check out our services offered and call or click to schedule a free estimate today!  …

Specializing in drywall and plaster! We always guarantee your satisfaction and won’t leave until the job is done right. We take pride in ourselves and on the quality work we provide, while always delivering great customer service! Check out our services offered, then call --or-- click to schedule a free estimate today!  …

Specializing in Metal roof restoration and coatings, interior and exterior painting, and wall paper removal! We guarantee your satisfaction and we won’t leave until the job is done right. We pride ourselves on the quality work we provide, while delivering great customer service! Check out our services offered and call or click to schedule a free estimate today!  …

They were to be here between 12 and 2. Never showed, never called. With reliability like that when trying to earn my business, I don't need there services at all.

They have excellent service. I would use them again in the future.

Description of Work
They installed a new unit in my home.

Two workers removed the ils window unit, including removing all the old wood. They installed the new unit and built new support beams and painted and calked the appropriate areas.

Description of Work
Two workers installer à window AC unit in my d'en wall, as requests. The job requiert some carpentry in a less than idéal environnent. Both workers were polite, professional and thorough. I definitely recommend this company.

He was great. He had been doing this for over 20 years. Very professional. Thought my husband could install it but he couldn't. I was charged the same amount that Lowes was going to charge.

Overall experience excellent. Received est. and the work was performed in a professional and timely manner My opinion is the technicians work was above the standard required by contract. An asset to the company's conduct Technicians were experienced and very professional. I have been doing business with this company since they first started. I have a service contract with the company and twice a year I receive a check up with discounts on any parts that are needed

We contacted Ruddy and Morris and they came to service the refrigerator the next day. While they were at our home repairing the refrigerator, I asked if he could possibly take a look at our ice machine. He gladly obliged and took the machine with him to repair at his shop. He called the next day and said the repair would be minimal because he could use some parts he had in his shop. We were fortunate to have both our refrigerator and ice machine repaired quickly and for a very reasonable price. Thank you Ruddy and Morris!

Description of Work
Rutty and Morris repaired our refrigerator and small ice machine. The repair was done quickly and the quality of the service was excellent. The service man was very friendly, helpful and professional. He called back quickly to inform me that the part had arrived and saved us a lot of money on the repair of the ice machine. We will use them again!

they were very punctual and cleaned up all of his mess. The whole process was prompt and effecient

Description of Work
repaired/replaced leaking faucet on exterior of house, unplugged drain and reconnected faucet that was not installed correctly by someone else/not this company

It was word of mouth from a friend of mine, who told they did a good job for him. What stood out to me the most was their cleanliness, how clean it was when the work was done. They were quick; they gave me the estimate one day and did the work the next day. I would use their services again in the future.

Description of Work
I used the services of Rutty & Morris Llc. in the last ninety days. I paid $460. They added another return air to my house for the air conditioning.

Thank you so much for the good report on Angie's List. We appreciate you business.
5.0

Kitchen sink was stopped up. Tried using plunger repeatedly with no success - it was plugged solid. Water was backing up into the dual side of the sink. Called Rutty and Morris Plumbing and a live person answered the phone right away - no voice mail. Was told they would get to me by phone before long. Plumbers Troy and Mitch called to confirm that someone was at home within 90 minutes and said they would be right over (had just finished up another job). I asked them to use the side entrance so that I'd be sure to hear them when they arrived. Upon arrival at the side door, they pleasantly spoke and introduced themselves and went right to work. They were professional and knowledgeable. I appreciated that they were conscientious about my indoor/outdoor kitchen carpet and the entire area that they were working in. They courteously asked for the use of house outlets to plug in their equipment, and any other materials, i.e. a towel, bucket. They answered each of my questions to my satisfaction. After Troy ran the roto-rooter through the under sink drain for a few moments, Mitch tested the wall above the sink to see whether the flow was going up rather than down by monitoring the wall's vibration. At first, it appeared that this was not a problem and the rooter continued. Then to be certain, Mitch went outside and observed that the water was indeed going up toward the roof, instead of down. Troy promptly stopped the machine and took it by ladder to the roof to work it from there. After the water was running freely, they stayed around, cleaning up behind themselves, wiping up the area, discarding soiled rags and monitoring the water's continued flow for about 10 minutes. The job itself took just 30 minutes. After they were paid, and left. We turned on the washer to do some laundry. When the laundry water started to flow out, both sides of the kitchen sink and the bathroom sink began to fill up with muddy, murky water sludge. A call was made right away again to Rutty and Morris. The receptionist said that she would get the guys back out to our home right away. Within 20 minutes, they were back, surveyed the situation. Discovered the problem: washer , dual kitchen sinks and bathroom sink were all tied in, with serious grease build-up in pipes. They went under the house with the roto-rooter, got the water freely flowing, made recommendations that we pour a couple of gallons of bleach down the sink every couple of weeks as a safeguard against future blockage. Also suggested that at some future time, we might consider changing some of the L-joints under the house into 45 degree angle piping. Gave estimate of how much that would cost down the road, cleaned up behind themselves, after re-filling the washer and letting it drain while checking all other sinks, tubs, and toilets for drainage and again left, wishing us a nice day. It has been rare that I have given a recommendation like this. But this one is well deserved. It was a job well done, hitting on all cylinders. It was professional. It was timely. It was courteous. It was fairly priced. Also, I was offered the Senior Citizen discount without having to ask for it! I would certainly use again and recommend the services of Rutty and Morris.

Description of Work
Used snake under the kitchen sink to attempt to unstop the drain. Discovered that water was flowing up through the vent rather than down. Promptly went up to roof to run snake down through the vent to continue the operation and clear the pipes. Stayed an additional 10 minutes to make sure that water was flowing freely, while making sure to clean up area behind themselves. Returned promptly after being called, upon the discovery that doing laundry in the washer was causing water to back up into the dual sink in the kitchen again, as well as the bathroom sink. This time went under the house to clear the pipes and restore drainage.

Thank you so much for the descriptive good report on Angie's List. We appreciate your business