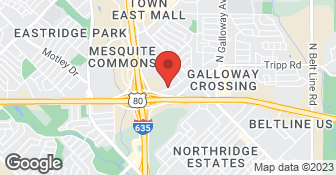 Our mission is to exceed our clients expectations, every time. We will achieve this mission by making their vision come to life with precision and accuracy, while upholding high ethical standards.

I worked directly with Danny Sanchez the CEO of this family run business. They have been in business for about 25 yrs. I had originally chosen another company form Angies list, however Exodus was doing work in my neighborhood so I talked to them. I was in need of roof replacment from insurance claim, but also needed to have my house painted and some wood replaced. Exodus was able to do all of it, as the other company only did roofing and guttering. I liked Danny's professionalism and how he sat down and answered all my questions and explained things. After researching them further I knew that as a family run business they had several family members that depended on the sucess of this company. Danny took his time with me and continued to answer questions as they came up while I was making my decision. He worked with me on my budjet allowance for the painting and wood replacment. I am very picky about work being done so I was watching the workers as closely as I could and if I had any concerns I would call Danny and he would address them. I even called them back out after the first rain because I thought I had heard something come loose on my roof, and had wind blow rain into the fireplace. They came out and checked everything to make sure it was ok. They warrant thier work on both the roof and painting, so I felt good about using them knowing if I needed to call them back for any corrections I could. The only issue I had which I explained to Danny was there were times when the supervisor was not here and I wasn't sure the workers understood what I was saying to them. There were some places I felt like needed 2nd coat of paint but when I was explaining it to the workers when they came back I didn't feel like they understood or agreed. So I don't think all the places I wanted a 2nd coat got painted again. I had Danny look and he assured me if there was any problems with peeling etc he would correct it. However I am still going to put a 2nd coat myself on a few places with the paint that was left over. They offered to help me with the insurance paperwork, even though I was able to do most of that myself, they did fax all the required documents for the insurance claim part to my mortgage company and insurance company. They started and completed the work when they said they would. For the work I had done their price was fair and competitive. Danny was great to work with he listened to my concerns and addressed them always.

Providing our painting services in the Dallas Fort Worth area. We specialize in interior/exterior painting for residential and commercial projects. We are family orientated and help our community with work and services. In a business where we have a bad reputation from contractor to painters and filled with bad service we pride ourselves in quality service from the sale to the end of project. Feel free to call us for a free estimate at 877-426-2552.  …

“We have the experience and dedication to bring your dreams to reality! We guarantee your satisfaction, and we won’t leave until the job is done right. Call or click to schedule a free estimate today!”  …

Licensed
Insured
All statements concerning insurance, licenses, and bonds are informational only, and are self-reported. Since insurance, licenses and bonds can expire and can be cancelled, homeowners should always check such information for themselves.To find more licensing information for your state, visit our Find Licensing Requirements page.
General Information
Free Estimates
Yes
Eco-Friendly Accreditations
Yes
Emergency Service
Yes
Warranties
Yes

We are General Contractors and are proud to be able to do all types of work. We generally focus more on Commercial & Residential Remodeling, Roofing, Painting, Total Rehabs, etc.

How is Exodus Construction overall rated?

Exodus Construction is currently rated 4 overall out of 5.

What days are Exodus Construction open?

Are warranties offered by Exodus Construction?

What services does Exodus Construction offer?

Exodus Construction offers the following services: We are General Contractors and are proud to be able to do all types of work. We generally focus more on Commercial & Residential Remodeling, Roofing, Painting, Total Rehabs, etc.