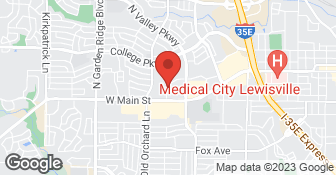 20 Years experience in foundation repair commercial and residential. We repair slabs and pier and beams. We do drainage correction and tree root barriers. Award winning....

OFFERED BY
A-1 Guaranteed Foundation Repair…
4.8

They provided a good honest assessment that work is not needed.

Description of Work
1940 Tudor home near bishop arts district. The home is pier and beam built over limestone, which has been remarkably stable. However the home also has a sunroom with a concrete foundation that needs repair and possibly additional support to prevent additional shifting.

Marianna was great to speak with while scheduling. She was very helpful in getting my appointment quickly. Friendly and great customer service. Kevin responded on time to do the inspection. He was very friendly and knowledgeable. He was thorough with his assessment and explained in great detail his findings and recommendations. I have dealt with several foundation companies and have found this one to be the best customer service and based on the reviews I have seen, they deserve them.

I brought them out in 2016 because I was continuing to have foundation issues after another company had worked twice on my home. Kevin came out and said I didn't need foundation work. He recommended I add foundation watering and pointed to a tree in the back yard as drawing water from under the foundation. First I had automating watering installed around the foundation. After waiting a year to see if that corrected my issue, it stopped getting worse, but didn't get better. At that point I broke down and had the tree removed. Within a year almost all the cracks had closed, and doors were working smoothly. I just recently had them out again to see if anything needed doing as I prepare to do some improvements to the home. Keven showed me exactly how my home had improved, comparing old readings to current. We could see how the opposite side of the house had significantly improved from the foundation irrigation and the foundation near the tree had totally recovered. He stated the minor issues I had left did not indicate a need for foundation work. It's a pleasure to work with someone who will give you good advice that doesn't always lead to spending money.

They were very professional. I had a nice experience during scheduling of the work as well as when the technician came to do the job at my home. I would definitely hire/recommend them.

Description of Work
Inspect Foundation for any potential cracks or damages

I called twice and left a message. I didn't hear back from either call.

I am sorry we did not intentionally not respond to your phone calls. Please advise your phone number and I will contact you immediately. Mariana Hansen A1 Guaranteed Foundation Repair 214 392 2633
5.0

The work was completed quickly and efficently

Description of Work
10 Piers were added

We had water in one of our rental units and thought that it was a problem with the foundation. I had Kevin meet me there. He was awesome. Luckily, the water intrusion was due to the dirt being too high around the exterior of the foundation. Kevin quickly spotted this and made great recommendations on drainage to fix the issue. I certainly will call him again with any foundation issues with any of our rentals or personal residence.

Description of Work
Troubleshoot water intrusion in a rental house.

This is the second time I have hired A-1 to perform a foundation check using a coupon I get from Angie's List. They take measurements in all rooms to see how much the foundation has shifted. A couple of days after the inspection I received an e-mail with a hand sketch of my floor plan and what the measurements were in each room. If I ever do have foundation problems I will be using this company.

This company was by far the best company I have dealt with when it comes to foundation. I had seven estimates and I asked all of the companies to come and look at the opening to our crawl space before tunneling in to the side of my house and all refused. Kevin came out and assure me they could use the crawl space opening saving me $2000.00. Mariana was wonderful to deal with & always keeping me updated. I know they are busy because they are the best at what they do, FOUNDATION. I believe the job took longer than expected because of the tight crawl space but the foreman was great and I was not changed anything extra.

Description of Work
A 20' rotted beam & 11' cracked beam needed to be replaced.

How is A-1 Guaranteed Foundation Repair overall rated?

A-1 Guaranteed Foundation Repair is currently rated 4.9 overall out of 5.

What days are A-1 Guaranteed Foundation Repair open?

A-1 Guaranteed Foundation Repair is open:

What payment options does A-1 Guaranteed Foundation Repair provide

No, A-1 Guaranteed Foundation Repair does not offer eco-friendly accreditations.

Does A-1 Guaranteed Foundation Repair offer a senior discount?

Are warranties offered by A-1 Guaranteed Foundation Repair?

What services does A-1 Guaranteed Foundation Repair offer?

Are there any services A-1 Guaranteed Foundation Repair does not offer?