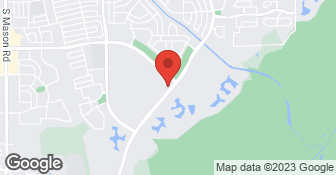 We're a family-owned and -operated business – always have been, always will be. We've made Katy our home for 15 Years – our life's work. Give us a call today and see what a difference we can make to your home & business....

They turned out spectacular

Thank you so much for your business. Have a wonderful day and I am very proud of Melissa and Sean for making you pleased.
5.0

Wonderful. Could not be happier and work was done in a timely manner and they were really pleasant to have in my house.

Description of Work
Carpet and grout cleaned and sealed

Sean did a great job at very fair price. Carpets turned out clean, fresh, removed the stains. I will call them next time.

Description of Work
Need to have carpet in bedrooms, closets, game room, large rug and stairs steamed. I had never done so in 8 years. Several puppy stains in bedroom.

Thank you so much for sharing your experience. I am very pleased that my Son worked hard and gave you a wonderful experience with your carpet cleaning. Please know this means the world to me as a Small business owner and as his Momma. Have a blessed day! Angel
5.0

They did a great job!

Thank you [Member Name Removed] for taking the time to share this. Please let me express how wonderful your support is for our Family owned local business. Have a great week.
5.0

Fine. I would use these folks again.

After reading Angelic Carpet Cleaning reviews, I knew this company would be very professional and they would take care of our cleaning needs. Glen and Valentin did an excellent job. I have never had such a professional and friendly service provided by anyone. The carpet throughout our house looks as good as when we bought the house 13 years ago. I would highly recommend. Excellent job, great communication, very reasonably priced and efficient. Such a great experience!

Thank you so much for sharing your wonderful experience. Being a family owned company we are so greatful for you to take time to say kind words. Please give us a call anytime with new flooring or more cleaning.
5.0

I set up an appointment on Tuesday. Glen and Chris arrived Thursday morning ahead of schedule. They walked the rooms, noting stains and areas of wear. They gave me the price of $209 for six rooms and three closets. The living room is large - about 20 by 20, one bedroom about 16 x 14, two rooms about 13 x 11, one bedroom about 12 x 11 and one den about 10 x 10. They use a truck mounted system and were considerate of the fact we have a dog. The stains in each room were spot treated and all small furniture was moved off the carpets. Big furniture was shifted to clean under things. Little squares of plastic sheeting were put under the legs of furniture that couldn't be moved. In the offices, the plastic mats for our office chairs were taken up as were the chairs. Both men were polite, interested in what I wanted done and obviously concerned with doing a good job. They were honest in telling me that with the high humidity that day, it would take at least 8 hours to dry completely and that walking on them was okay but to beware that they might be slippery. The carpets were mostly dry after 8 hours. The corners where air circulation is poor took a bit longer. The carpets look great. All the stains came out except the paint and varnish ones that they told me probably would not. Great job!

281-702-9595 832-692-9443 We have the experience and dedication to bring your dreams to reality! We guarantee your satisfaction, and we won’t leave until the job is done right. Call or click to schedule a free estimate today!  …

At Priority Home Services, our mission is to be the providers who bring back that personal touch with our customers! We offer multiple services, making it a one stop shop. Our trained and skilled team of professionals offer exceptional service and deliver lasting value to your home. Locally owned and operated, our customers are like our neighbors and we constantly strive for your satisfaction! Call or click to schedule an estimate today!  …

Klean Maxx Management LLC is a Local family owned business. We pride ourselves in getting the job done right. We have developed a revolutionary new system that doesn't only get your ducts clean but also keeps them that way! We use green, eco-friendly products that help you and your loved ones breathe better. We use a proprietary probiotic formula that eases asthma, allergies, and pet dander. Only non-toxic materials are used and we rid your home of mold and mold spores naked to the human eye. Call Us Today for a free consultation and start breathing easier.  …

Angelic Carpet Cleaning is currently rated 5 overall out of 5.

No, Angelic Carpet Cleaning does not offer a senior discount.

No, Angelic Carpet Cleaning does not offer warranties.