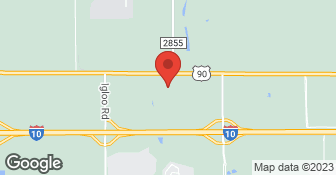 We do Roofing, Remodeling, all Contracting Services. We also do Insurance Restoration, we help the homeowner thru every Insurance claim they need. We have lots of experience with all Insurance Claims.

When he came to work, he came under a company called Busy Builders. I thought he would do a good job but instead he left a total mess. He took my electric card, he stole my insurance money and a bottle of hand soap, broke my washing machine and I had to replace it. When he came out here, I was staying over in another condo while they were supposed to be working on my things and the job that was supposed to take like fifteen days ended up taking up over sixty days. I paid him two checks under Busy Builders and he claimed he wasn't paid and this is because he wanted me to pay him again under Absolute perfection. He sent me threatening e-mails if I even thought of reporting him. Because of their ineptitude and inefficiency, I still don't have a functional bathroom and because I can't afford new contractors, I have to make do with the shoddy work that was done. I suggest that they remove this company from Angie's list because their worker is a crook and should not be let near any body's house.

Description of Work
I used Absolute Perfection Inc to do handy man services in my house.They installed a toilet that was damaged and I had to call a plumber out to fix that, the faucet in the bathroom was installed backwards so I don't have control over hot and cold water.

A different contractor left 2 sides of my home attic completely exposed to the elements on Friday and for the weekend. When it started to pour, they were unable to come help! That's when I called Absolute Perfection Inc. and they came immediately. I will be forever be grateful for their help. I'm glad they came because it rained the next 3 days! I did not have any water damage.

Description of Work
They hung plastic sheeting to protect my attic and the interior of my home from rain. We were having new siding installed and the other contractor left my house open for an entire weekend!

They didn't finish any of the projects. Over billed for all of the services they offered. They took all of the money, and even stole some items from my home before they left. Was supposed to be a 15 day job, but it took 64 days, and none of the work is completed.

Thank you for considering Maid Envy to care for your home. Our professional cleaning service is committed to your satisfaction and we look forward to providing you with superior and dependable housecleaning service. Our staff is extensively trained to properly care for your home and we practice green cleaning methods designed to safeguard your family, pets and environment. We use proven cleaning products, that include a variety of natural and green solutions that are not only effective but are safe and smell great. You will enjoy a home that is truly clean and healthy. Your satisfaction is our goal......that is why people choose Maid Envy! Call (832) 668-5822 for a free estimate.  …

Absolute Perfection Inc is currently rated 2.3 overall out of 5.