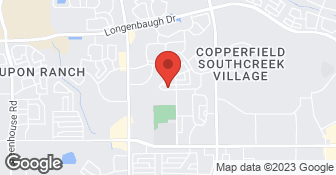 Serenity Floor Care has been servicing the greater Houston area for over 25 years. We started in 1992 with one small van and over the years we have been fortunate enough to expand. And we owe it all to our customers. We specialize in carpet cleaning, pet odor removal, oriental and Persian rug cleaning, upholstery cleaning, tile and grout cleaning as well as natural stone cleaning including: granite, natural brick, saltillo, marble, terrazzo and travertine, and slate tile....

10% off - Tile and Grout or Deep Hardwood Floor Cleaning…

9% off - 3 Rooms of Truck Mounted Steam Cleaning Including Stairs…

10% off - Area or Oriental Rug Cleaning…

It was great, they did a great job. They were very professional and I have a very big dog and they cleaned .

They were there when they were supposed to be showed up on time. They did a good job.

Great ! They arrived on time and finished the job in less than two hours.

He did a great job and was very friendly and professional!

Fantastic job! Will use this company again

Jose was so friendly but still professional. My carpets look like new. Even cats' accident stains came out. I have already recommended this co. to my hairdresser, & she plans to book a carpet cleaning soon .

Description of Work
all carpets cleaned.

Rep came out, quoted price and said he needed to spray enzyme on sofas and rugs to let sit for 24 hours and would return the next day to clean. Called late the next day and said truck broke down and couldn’t come. I informed that we had a party at noon the next day and rep said he would be there first thing in the morning. No one showed up and I got a text saying a tech would arrive between 10 and 11am when our guests were arriving at noon. Both couches and rugs in my living room were unusable because of the enzyme that was sprayed and left on them. So incredibly disappointed in the service. No one even called me, I had to call them. Would never recommend.

Needed a call back, and they were responsive.

They rescued me when the company I had hired could not come due to an emergency and I needed the carpet cleaning done that same day.

This company is really fantastic. They cleaned my upholstery (microfiber) and made it look better than I could ever imagine. Cleaned the areas where they worked, very efficient, punctual and both gentleman who performed the work were extremely nice. I would recommend them to anyone who is looking for great work at a great price.

Mostly went fine. Took three visits. The first was excellent. However, they forgot (left) some equipment behind. Returned later to collect. At that time they did not have sufficient personnel (i.e., more than one person) to move a table. I am over 70 with a bad wrist and could not help. When they returned again they seemed surprised that I had not asked two other women in the house to help...it was not their job to lift heavy items! On the flip side, the main point person could not have predicted that his helper would not be able to help on the second visit because he had called in sick. Overall, I think he did his best and was friendly. He suggested cleaning my tile also and it was a good suggestion.

Description of Work
many items cleaned including carpets and upholstery

headrest of chair had to be redone and Clay came and redid that and it was great then.

They did a great job. We’ve had them back several times. So they’re consistent in their quality of work.

Serenity showed up promptly as scheduled and handled the job, 4 upstairs rooms and walkway, professionally and efficiently. We did not expect anything less as this is our 3rd time using their service.

I’m a repeat customer & this last job Serenity did for me was just as good as previous ones. They are on time, trustworthy & did amazing job on my carpets. Listed my home after their visit & it sold in 3 days....maybe it was the clean carpets ;)

Description of Work
Cleaned carpets prior to listing home

Serenity was great! Ryan and his helper called ahead of schedule and arrived early. They gave me a quote and were very fair with their prices. I will be using them again.

Description of Work
Carpet, tile and couch and loveseat cleaned

This company never disappoints. They were here a year ago and did an awesome job with my floors, and this time was no different. Their tech, Ryan, is such a pleasant and hard working young man. I give this company the strongest recommendation possible.

Thank you so much for taking time to post a review. It was a pleasure working for you and we hope to see you again. Best regards! Serenity Floor Care
5.0

Excellent, professional service was provided and the room discount was honored.

Thank you so much for your business, we look forward to working with you again! Serenity Floor Care
5.0

Thank you so much for your business, we look forward to working with you again! Serenity Floor Care
5.0

This company was very happy to work with my schedule-- they showed up on time and worked quickly. They were very careful with the office furniture. My carpet has many stains from the connected warehouse and they got all the stains out.

Description of Work
II callede Serenity to clean my large office carpet. They came at my convinence at 5pm when the office was closed. Fast and efficient! I called them 3 years later for the same excellant service.

Thank you so much for your continued business, [Member Name Removed]. We look forward to working with you again! Serenity Floor Care
1.0

We are SO sorry to hear that you were not satisfied. Please return my call and I will be happy to have the owner come out, take a look and we will clean the areas again, at no charge. Please give us an opportunity to make this right. We value our customers and would love to work with you on a resolution. Thank you for your feedback and please accept our sincerest apologies for your experience. Serenity Floor Care, 713-853-9399
5.0

I responded to an Angie's List Deal from Serenity to clean four rooms for $149, but I ended up paying $300 additional. I was charged $449 for Serenity to clean three rooms and an 5' X 8' rug. The cleaner said I had more square footage than the offer included, and I had to pay extra to treat dog stains. The promotion description on Angie's list was misleading. Nonetheless, Serenity did an excellent job getting rid of the dog stains and the carpet dried faster than expected. The cleaners were cordial and professional, although a bit pushy.

Description of Work
3.5 rooms of carpet cleaning. One room had bad pet stains.