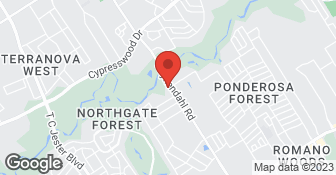 Turner Enterprises has been in business for over 25 years, providing interior and exterior, residential and commercial painting for the Greater Houston area. We offer sheetrock repairs, pressure washing, and even carpentry services. We are your wall covering specialist including wallpaper, fabric panels and acoustic fabric. We have won the Super Service Awards every year, and are a BBB Accredited Business. See our A rating and over 345 reviews on Angie's List! We look forward to helping you!  …

Specializing in INTERIOR AND EXTERIOR PAINTING! We always guarantee your satisfaction and won’t leave until the job is done right. We take pride in ourselves and on the quality work we provide, while always delivering great customer service! Check out our services offered, then call --or-- click to schedule a free estimate today!  …

They were easy to talk to/deal with. They worked quickly, efficiently, and accurately. They did an amazing job.

They did a good job, but their subcontractor was not very eager to finish the job. It took them too long.

Description of Work
I had Houston Siding install all the windows for us and put siding on.

He built a wall at the rear of the house and took out an old sliding door both upstairs and down..Glenn provided the windows but I wanted a specific door that he did not carry. Glenn's crew did all the installation work in two days. They come early and work late so your home is not tied up. Great job. When my neighbor saw my work she contacted Glenn and he did hers as well.

A single carpenter dropped by cleaned up the small mess, installed a new replacement piece of Hardi soffit, then painted the piece to match. Others who did not know which piece was replaced cannot find the repair. The repair was made free-of charge, the work was clean, prompt, and expert.

Description of Work
Houston Siding Company replaced the brick frieze, soffit, facia and rake-end siding on my home and painted it back in 1998. For no apparent reason, one narrow piece of James Hardie soffit, 8 feet long, delaminated and fell in pieces. All of the remaining material looks as good as new with no problems. I called Houston Siding to see if they would repair the problem.

The crew played loud music the entire time. They damaged shrubbery and left trash all over the yard. The business did not respond to my complaints. The vinyl siding was wind damaged at a later date. I called the manufacturer, they sent me vouchers to pay for the repair. Houston Siding then refused to come out and fix it, because the amount was too small. I had to pay contractors to come and repair the damage because Houston Siding would not stand behind their work.

Crew showed up on time, the carpentry was superb and they were professional and polite. When performing the final inspection I discovered they had marked up the house paint with ladders, hands, etc. However, Houston Siding quickly responded by sending their painters out the next day to correct the issue.

Description of Work
After soliciting four bids, we chose Houston Siding to replace our soffits and fascia with James Hardie products. We chose them based upon a positive past experience (James Hardie siding installed in 2005) and a reasonable price.

Thanks so much for your report.We are very pleased and happy for your knowledge of selecting us and hope you will do so in the future.Again; Thank you so much, Glenn Skates president
1.0

Sub contractors used for everything. Broke my window and tried to blame it on my dog. Unless she flys, there was no way it could have been my dog. Replaced with a new window and broke that window. Had to call Bill Baker to get that resolved. Painters did not seal doors and windows as per our request. Siding hung WRONG and when we asked them to fix it, they came out and said they would be back to repair. A week later when we didn't see anyone, they said our house has shifted and that if we want it fixed, we would have to pay for additional materials and labor. Now, unless our home shifted in the three days it took us to notice the crooked siding, why on earth would we have to pay additional money for what they should have fixed correctly in the first place. DO NOT USE THIS COMPANY. THEY DO NOT STAND BY THEIR WORK.

Description of Work
Siding and painting the exterior of our home

My statement is that we were a member of Angie’s List in February 2009. Since that time Houston Siding has not been a member. Houston Siding sent out a staff member twice to insure the caulking and painting was completed properly and both jobs were fine. We also sent out a Supervisor to determine the problem. He found the homeowner and another person trying to install a door and the wall they were installing it on was out of square. This was caused during the original framing of the home. We had nothing to do with the wall being out of square. If we had moved the wall the sheetrock on the inside of the home would have cracks which it does not. Our supervisor expressed to the member that the salesman would contact them on a price to repair the frame. Our salesman did call them with the price of $600.00. This price included moving the wall, repair the sheetrock and new siding, painting the interior and exterior of this 5ft wall. We never heard back from them. It is not uncommon that during the original slab pour that the form is moved. This will cause a small wall and corner area to get out of square, sometimes 2 or 3 inches. When this happens a door must have several shims inserted in many areas to make the door function correctly. This was explained to the member by our supervisor, he also showed the member where someone had filled in the gap in the concrete. Again, I am sorry that the member feels that we caused this out of square situation. Sincerely, Glenn Skates, President
3.0

The gentleman that came out was nice enough and the quote was inline with the other 2 we got. However, his quote was written on a dirty quote sheet with no additional info except for the dollar amount. It was less than professional and we wanted to have a written record of what he was quoting on. He verbally told us, but we were not able to compare his quote to the others which were professionally written with many facts and exactly what would be done on the job. When I called him to ask for more info, he said he couldn't imagine what else we would need to know. It was a complete turnoff for the company. Although their quote was comparable, we decided to go with another company. First impressions really do count.

Description of Work
Got a quote from Houston Siding. They were one of 3 companies that we got quotes from for James HardiePlank siding.

There are several companies using our name with improper indenification. We are Houston Siding Company, all our sales reps have a certain business card logo, we have a three part contract which clearley identifys what we are going to do and preform. All of our jobs are preformend with professionally trained craftsman carpenters and supervised by a James Hardie trained supervisor of instalation proceeders of there products.We futher have a combined total of over 100 years of remodering experience, with one member being a Texas A&M grauduate of construction science.There must have been someone repersenting themself different than a salesman of houston siding. We had over 300 calls in one week after the 2009 Hurricane, therefore we did ask some of the installers to go out and try to help some people try to just fix or repair the Vinyl Siding that had blown off, this would only have been a repair of some sort, not a complete job. Thank you Glenn Skates President Houston Siding Company
1.0

I contacted this company by phone and e-mail. I received a phone call from a gentleman who said he was the representative for the West Houston area. I explained that I needed a price quote/repair for an area under the eaves that we had to take out to remove a bee hive. (maybe a 3 foot by 2 foot area)The gentleman tried to set up a time with me and since I work, I was trying to schedule for after 3 pm. We finally came to an agreement (or so I thought) that he would come by the house and look at the repair (it was the front of the house) and he would leave me a written estimate and call later. That was in March of 2011.We are now mid June and I have not heard, seen or anything from this company. I am not even sure if they are still in business. I would be very hesitant in using this company just because of this experience

Description of Work
None

The crew was professional and did a quality installation. They showed up about mid-morning but worked until the job was completed - about 7:30 or 8PM. The job was inspected by a PE, and I just received my windstorm certificate last week. (The state was slow, not Houston Siding.) I wish that Houston Siding had been more upfront about informing me of the need for or at least disadvantages of not having a windstorm certificate for the window installation. I had to inquire about this to my insurance agent, and then inform Houston Siding that I expected it to be a part of the job. I paid an additional $250 for the windstorm inspection. In the roofing trade, I believe the windstorm inspection is generally automatically included by a quality roofing company. Overall, they did a first class installation. I would definitely use this company again.