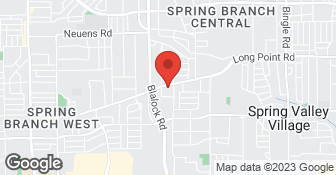 Forsyth has replaced the majority of the flooring in our house over time, and this was a pretty small job. They ran into a couple of issues but persisted and we ended up with a beautiful floor.

Extremely well. Mike and his team exceeded our expectations. Mike guided us through the carpet and vinyl selections. His team of Jerry and Jeannie installed new vinyl flooring in our kitchen, guest bath and utility room. They were totally professional and competent. Then Jason and Dean installed new carpet in our living/dining, family room, hallways, and 4 bedrooms. They were professional and competent. After installation each team cleaned up their work and left the floor clean and ready. We will recommend and use Forsyth Floor Company again without any hesitation.

This company was such a pleasure to work with, I wouldn't hesitate to recommend them to anyone. Mike, the owner, was very responsive and detail-oriented. He helped us pick out a floor that would be a good fit, came and personally measured each room the old fashioned way. I say that, because I had another company come out to measure and they just used a digital measuring tape that ended up adding an extra 74 square feet to our bid, which is annoying and adds up. His cousin, Darrell, handles the install and he's a very efficient worker and just as nice as can be. He's patient and will walk you through each step and explain each process. He's also very neat, cleaning as he goes and detail oriented, too. He and his colleague finished a day early. We are extremely happy with their work and also with how considerate they were to work with. After reading reviews of other companies, I am so relieved we ended up with Forsyth, I know we made the right choice. For what it's worth, their bid was about $3,000 less than the other bids I received and I fully believe they did a better job than the others would've done to begin with, so it's a win win.

It went great! They were very professional and I would not hesitate to recommend them and would use them again if there is a need. I do not remember the date, but couldn't complete the survey without a date so I made one up.

The salesman we dealt with (Clive?) was easy to deal with and had some good suggestions. He was honest about his carpets and came to the house to measure. He was very prompt. The installers were excellent. They moved all the furniture to install the carpet and put it back where we wanted it. Our painter was here painting the baseboards after they did the installation in one room. They worked well with the painter in getting the furniture back.

It took a week to complete the job. The quality was excellent.

I like that the guys from Forsyth Floor are trustworthy. They did a good job. There was a problem and they came back the next day and fixed it.

They were punctual and the actual work was slightly less than the estimate. He was accurate in telling me how much it was going to cost. The installers were fantastic. They took their time and didn’t rush through. I am very pleased with the finished product. They did an amazing job with the clean-up and on the flooring. I had vinyl put down in another room several years ago with a different company and there is a huge different in the quality of the floors.

Description of Work
They installed sheet vinyl in 3 rooms.

I liked him and he was very professional. He was respectful and asked questions that had to do with the actual work they would be doing. No, pressure what so ever. He asked when I expected to have them do the work or an idea. There was no hard sell or anything like that.

Description of Work
I went to Forsyth Floor Company store. He showed me some samples and let me take some samples home. After that he came out and took measurements and gave me a quote.

We have the experience and dedication to bring your dreams to reality! Specializing in Ceramic Tile and Flooring services, we guarantee your satisfaction, and we won't leave until the job is done right. We pride ourselves on the quality work we provide, while delivering great customer service! Call or click to schedule a free estimate today!  …

WE DO QUALITY WORK, TAKING CARE OF ALL SMALL DETAILS, WE ALWAYS DO IT RIGHT THE FIRST TIME AND GUARANTEE YOU WILL BE HAPPY WITH THE FINISHED PRODUCT.  …

Insured
All statements concerning insurance, licenses, and bonds are informational only, and are self-reported. Since insurance, licenses and bonds can expire and can be cancelled, homeowners should always check such information for themselves.To find more licensing information for your state, visit our Find Licensing Requirements page.
General Information
Free Estimates
No
Eco-Friendly Accreditations
No
Payment Options
American Express, MasterCard, Visa, Financing Available
Warranties
Yes

FORSYTH FLOOR CO INC is currently rated 5 overall out of 5.

No, FORSYTH FLOOR CO INC does not offer eco-friendly accreditations.