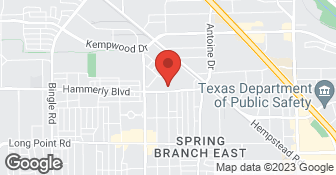 Condon Gardens has been beautifying Houston since 1952. As an all organic nursery, we can help you create a true ecological landscape. From seasonal color to large trees, we're a one stop shop. We also offer complete landscaping services. Our services include architectural design, consultation, design and installation of pools, arbors, patios, decks, ponds, fountains, landscape plantings, outdoor kitchens, irrigation. We also provide yard maintenance catered to meet your needs whether its weekly, monthly or quarterly. Whether you're building from the ground up or just need some color in your pots, we will keep your yard looking beautiful all year long....

Ultimately, we did not use Condon Gardens for this job. They came out initially and surveyed the yard. They seemed knowledgeable about the plants and requirements for our project. Following that first visit, I didn't hear from them again for two weeks. I called 4 times and emailed once to get a quote for the work we discussed. I did eventually get a quote, but I could not get in touch with them again to answer questions or schedule a start time. I later found a landscaper with good reviews on Angies List who provided a quote on the spot and scheduled the work on my schedule. I wish I had checked Angies List first and not wasted time on Condon Gardens. I would not contact them again.

Condon Garden's business practices were very underhanded in my case, so beware. Here's my story. I signed a weekly yard-maintenance contract for $40/week plus tax. I was told Condon's policy was to mark up invoices 7% if customers used a credit card, but I always paid with a check. Nevertheless, every month they first added a 7% mark-up and then showed a 5% discounted cash price if paid on time. When I complained that my contract stated net plus tax only, I was told I also had to pay a 2% Administration fee. This fee was not shown anywhere on the contract nor discussed with me verbally and I refused to pay it. Although my representative verbally agreed, the invoices continued as above. I finally fired them out of exasperation. Epilogue: they had the nerve to send me a final invoice demanding something like $900 in unpaid fees. I demanded a line-item statement in return proving what I owed. It's been two months and I've heard no more from them. Please take my experience into account if you consider doing business with this company.

Description of Work
I contracted with Condon Gardens in May 2012 to do weekly yard maintenance after learning they offered organic gardening services.

I am at a loss as to how to describe my experience with this company. We have used a wonderful landscaping company in the past but I was looking for a company who used organic planting. I found them through Angies List and because to date work, nor an estimate has ever been given to me, I have forgotten exactly when I first contact them. I know that despite my begging for a quote at the very least I have to date received no service and it is a mystery to me. I was so excited to find this company through Angie's List as their garden philosophy is very much in accordance with mine and I was very excited to use their services. I am someone who walks gently on the earth, do not like to use pesticides, use only organic anything where I can and respect the life that lives in the garden from the lizards, squirrels, birds etc. and after typing in organic gardening under Angies List this company was one of the only ones that came up. I wanted a quote to plant some nut trees originally. A gentleman from the company came out, told me he would send me/ call me with a quote. It was nothing urgent so I did not pester them despite the fact that I never heard back at all. I finally called and the owner apologized to me, told me that this gentleman was no longer with the company and that he would personally come out and see what I would like. He came and we walked through the garden and I pointed out what I was looking for. I wanted the nut trees, some flowers for the summer, the bird fountain repaired as the motor had died, and generally fixing up the garden. I told him I would appreciate a quote for everything and we could make a decision as to when and how we would go about doing the work. After several weeks and not hearing back, I called them and left a message. I now forget how many times since then I called and begged them to give me a quote and to at the very least please to fix the fountain. I finally spoke to the gentleman, the owner himself who had come out and he apologized profusely, promised me that he would get back to me and took my e-mail address again. I have not seen any e-mail and have not even had the courtesy of a call, if they did send a quote, to say have you had a chance to look at the quote. No follow up whatsoever. My husband was shocked that I even begged them to come and do our work. As far as he is concerned they have had every chance to come out and for whatever reason have treated us very poorly. If they were never interested in doing our work, they only had to tell us . All in all this scenario has gone on for over 9 - 10 months. We are now heading in fall and I believe I had originally contacted them at the beginning of the year. We were very disappointed as the owner told me that he could do so much such as fixing up tiles in the yard; planting of trees; lighting - you name it. I would appreciate you not putting in my address. Thank you.

Description of Work
Unfortunately no work was ever performed despite our requesting a quote.

They were reasonably priced. The work was good. They put some plants in, that had oyster scale and they came back out and treated it but it didn’t go away. So I finally had to get rid of the plants but I guess that can happen to anybody. The quality of the work was not so good because of the oyster scale plants. I will probably use their services again in the future.

Description of Work
I used Condon Garden Nursery for my lawn and yard work. I last used their services may be five or six years ago. They put in some plants for me.

Member, I am sorry that the plants had scale which didn't go away. Please in the future let us know that the problem was not solved so we can resolve it. Often times spraying needs to occur 2-3 times before the disease is cured. If that fails, we're happy to replace the plants at no charge. I sure hope you will contact us again for future planting. Thank you for your nice review.
5.0

. They did a pretty good job. There were three men to do the work and it was nearly eight hours of work. They cleaned two ponds by draining out the water, taking the leaves off and filling it with clean water. The house is at the end of the town house complex and they trimmed out the vines and that took a lot of time. I met the guy who came out to give the estimate. He was really nice. But he sent out another guy who did not get back to us as quickly as we would have liked. They were not very responsive. Their pricing was pretty average. I was pleased with their work. I would definitely consider using them in the future.

Description of Work
. I use CONDON GARDEN COMMERCIAL NRSRY for cleaning up nearly 800sq ft garden area, cleaned two ponds and refilled with clean water, and trimmed the vines that were on the house.

Bonded
Insured
All statements concerning insurance, licenses, and bonds are informational only, and are self-reported. Since insurance, licenses and bonds can expire and can be cancelled, homeowners should always check such information for themselves.To find more licensing information for your state, visit our Find Licensing Requirements page.
General Information
Free Estimates
Ask for details
Eco-Friendly Accreditations
No
Payment Options
American Express, Check, Discover, MasterCard, Visa
Senior Discount
No
Warranties
Yes

CONDON GARDEN NURSERY is currently rated 3.1 overall out of 5.

No, CONDON GARDEN NURSERY does not offer free project estimates.

No, CONDON GARDEN NURSERY does not offer eco-friendly accreditations.

No, CONDON GARDEN NURSERY does not offer a senior discount.