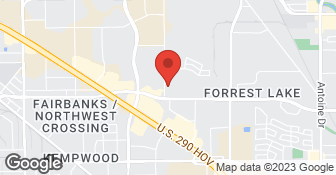 Concrete Patios Unlimited is dedicated to serving most of your concrete need through quality workmanship and a professional, friendly attitude. We are wonderfully dedicated craftsman who are always a pleasure to work with. Concrete Patios Unlimited owner has 32 years of experienced and 18 years as a member of Cement Finisher Local Union # 681. He has been on most of Houston’s major projects, for the life of his craftsmanship. He has hands on expertise in industry, highway dept. commercial & residential. When concrete is poured, he is always on hand finishing with the crew. Our decorative concrete craftsmen are certified with 12 to 14 years of experience in stamping and texturing. We like to look at concrete as creating a work of art....

Leslie and his team installed a 12'x15' patio cover and 12'x26' stamped concrete patio to replace the original 10'x10' pad behind our house. Leslie's quote was highly competitive and allowed us to complete the project much faster than any of the larger companies could offer. The work was completed in two stages, and Leslie communicated what to expect the entire time, from the initial samples to the finished build. He checked up on the project through each stage to ensure the work was performed to our satisfaction. I highly recommend working with Leslie and would hire him again without hesitation.

GREAT! I got a couple of quotes, and Leslie's was the best quote. One might be afraid that if it is too cheap it might not be good. But, clearly it was a professional job. It was poured like a foundation, with steel rebar. Like a driveway, it has a seam for preventing cracks. But, he used hardyplank instead of typical wood. Slightly slanted for rain runoff, but not visibly so. First day, the majority of the work was done. It was framed, poured, and colored. The second day, it was refined and sealed. Area was pressure washed. I gave him a B for punctualness because he came a day later than originally planned. But honestly that was no big deal at all. I should actually give him all A's. My wife loves it. I love it. 350 sq feet, $4400.

Excellent Job. On time and the price was right

We were extremely pleased with the job. The crew were very efficient, polite and professional. The job was done on time and it exactly met our wishes. The match with the pebble finish of the main driveway was very good and the new path addressed our drainage issues. We would highly recommend Concrete Patios for such work.

Description of Work
Demolished an old concrete pathway and front slab leading to the front door of the house which was damaged and had poor drainage. This was replaced with a new pathway and entrance area of reinforced concrete topped with a pebble finish that was matched to the main driveway to the house.

Mr. Massingill and his very professional crew did an outstanding job for me. Mr. Massingill showed up exactly when he said he would and his crews came two days later right on schedule. The job was completed in one day (to my amazement) and the job site cleaned up before they left. They even helped with spreading some of the dirt in my yard low spots without any additional charge. The crew was extremely friendly, even after the neighbors dog ran through the wet cement after they just got through smoothing. The guys did not even bat an eye and repaired the dog tracks laughing the whole time about how upset I had gotten. It seemed all in a days work for them and no big deal. Mr. Massingill and his team will be doing a lot more work for me going forward. I intend to use him for by Kitchen and Bathroom remodel projects coming up next spring. Just so you know, Mr. Massingill managed all this the same day his wife was in surgery for a major operation. I did not know this until the morning everything started and Mr. Massingill was on site. I immediately had to run him off to go to the hospital, trust me, the crew does just fine without him. What a pleasant experience and my driveway work looks great. Just what I wanted at an extremely fair price. If you want professional and extremely good work, this is your man.

Leslie did first-quality work. He's hands on and listens to what you want and works with you to make it happen. They protected the landscaping, and cleaned up each day before leaving. The work was worth every penny we invested in it. I absolutely recommend using Leslie for your concrete needs.

This is the best contracting experience I have ever had! Leslie and his expert craftsmen were great. They built my patio enclosure in only one weekend, followed by interior sheetrocking and painting the following week. Leslie was there every single day and kept in regular communication with me by cell phone. He was incredible in ensuring that I was satisfied with the final result. This was such a great experience, with an attentive contractor, excellent work, quickly done, great price. I highly recommend Leslie for any work you need done with a patio or enclosure.

Description of Work
Leslie's crew broke out my existing patio, poured a beautiful new stamped concrete patio in its place, and enclosed the patio to make a fabulous sunroom. They also built me a storage shed at a cost less than it would take to buy a storage shed kit at Home Depot!

I would hire them again without hesitation.

Description of Work
Installed a driveway.

Leslie came out and gave us an estimate very quickly. His estimate was one of the most reasonable that we received. He was always very professional and polite, as was his crew. They did a fantastic job redoing the concrete and siding as well as the recessed lights. They were also incredibly efficient and stuck to the timelines that were originally offered. I would highly recommend Leslie and Concrete Patios Unlimited.

Description of Work
- The demolition and excavation of driveway, and all sidewalk. - Exact tree roots. - Redid the sidewalks all around the front of the house and driveway - Replaced all siding on home and garage with hardy plank - Installed recess lights on porch and in back breezeway -Removed old porch columns and installed new wood ones

Came to check out the yard. But never received any estimate from him. Called few times and sent text few times to follow up on the estimate but didnt respond.

We help keep your property free from unwanted guests by designing Custom Gates that fit your lifestyle with secured access control at your convenience. We install and repair gate operators, traditional and ornate gates and provide estimates all while whistling old school show tunes. (Dance routines are an additional fee). With over 20 years of experience in the industry, we provide the best product knowledge, project planning and troubleshooting around. We aren't scared of any challenge or Gate Operator!  …

We specialize in Automatic driveway gates and wrought iron fence. We use galvanized steel for all of our projects, set our post 5' deep and use Light duty commercial grade gate operators. We believe we give you a higher quality product for your money. For every job we do CAD drawings that will be exactly what you will get. We also do wood fences, shade arbors, masonry fences, and masonry columns. We have been a member of the BBB since 2007 and have an A rating!  …

Bonded
Insured
All statements concerning insurance, licenses, and bonds are informational only, and are self-reported. Since insurance, licenses and bonds can expire and can be cancelled, homeowners should always check such information for themselves.To find more licensing information for your state, visit our Find Licensing Requirements page.
General Information
Free Estimates
Yes
Eco-Friendly Accreditations
No
Payment Options
Check
Senior Discount
NO
Warranties
Ask for details

Concrete Patios Unlimited is currently rated 4.9 overall out of 5.

No, Concrete Patios Unlimited does not offer eco-friendly accreditations.

No, Concrete Patios Unlimited does not offer a senior discount.

No, Concrete Patios Unlimited does not offer warranties.