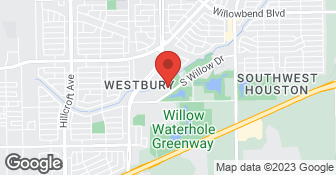 Uses licensed subcontractors for plumbing, electrical work and heating A/C. COST IS DETERMINED BY THE JOB. NO TRAVEL CHARGES. NO SERVICE CHARGES. MAY CONTACT THROUGH EMAIL....

Have used them for about thirty years on four different houses for everything from major remodel (moving/removing walls, adding closets, windows, doors, bathrooms, finishing out attic space) to coming to fix an emergency leak. I can always trust that they do it right and do quality work.

Description of Work
Remodeling and repairs

Caroline and Collin are a very nice couple. They are responsive and will answer all of your questions. However, there were some issues at the time of the repair. Caroline had surgery and was required to go in and out of the hospital, so it was difficult to contact the company at times. She is the contact person while Collin is away working on other jobs. Sometimes, it was frustrating, but we worked it out at the end. Collin and his team did an excellent paint job, and they worked quickly. We did have issues with the washing machine being placed differently after they worked in the laundry room, but he was happy to come back and fix it. Yet, we just can't seem to get it back to where it was. Regardless of that, the job was done in a timely manner, and the couple was pleasant to work with. I said that I will not use the service again because they do live far away from where we are. Therefore, it is a hassle when we find little problems and have to ask them to come fix it before the final payment was made.

Description of Work
Due to our water heater accident, I contacted Collin Remodeling Services to repair the damage. They installed new sheetrock in the upstairs bedroom, replaced the carpet, repainted everything (with details resembling the original), replaced the microwave and lighting fixture, and fix the cabinets.

It was excellent. They did a very good job. They were professional. They cleaned up well.

Description of Work
They remodeled our bathroom.

Please see above for details.

Description of Work
This contractor had a live person to answer the call. She was articulate, informed, and very helpful. The two contractors arrived on time and performed professionally. There was a water leak in my bathtub drain. They replaced the item to fix the leak quickly. Since that was all that was needed at the time, I decided not to remove the bathtub and remodel with a walk-in shower. I would not hestitate to use this company in the future.

This is the second time we have had Collin work on our house and it turned out excellent again. There were delays in receiving windows which were no fault of Collin, but took a bit longer than anticipated. We will continue to use Collin on further interior work and recommend him to others.

I called them once and left a message, but they never returned my call.

Description of Work
I called them to remodel my bathroom.

Description of Work
Collin Remodeling Services did a bathroom remodeling for me.

They added on extra work, that extended the length of time the work would take. I always inform the client that any extra work will extend the time and,also waiting on purchases they had ordered. It did not seem a problem he was very happy with the work.
2.0

In the walk-in tub, the fixtures were installed backwards. The hot was the cold and the cold was the hot. The window A/C unit he installed has stopped working. We discovered the window he put in was not caulked right. I called him twice and he said he would come back and take a look each time, but he never did. I eventually had to hire someone else to do the work.

Description of Work
He made a concrete handicap ramp and installed a walk-in tub. He also installed a window a/c unit in the back room.

Both Collin and his wife came out to scope the job. They were very nice and I had a nice feeling about them after talking to them. I asked them to provide a competitive bid. I let them know that I have remodeled several times so I am experienced with the process and my expectations both in length of time and cost are not unreasonable. Since I have remodeled several times, I did provide a clear scope of work. There were some variabilites like finishes, but we agreed that we needed a baseline quote and then we could work out the final details on exactly which finishes would comprise. We also discussed, from a labor and materials perspective, who would provide which materials and who would pay for what - for example: to replace the front door, we agreed that I would find the exact door I wanted, purchase it, and Collins Services would pick it up and install. Collin and his wife let me know that they were very busy and that my timeline may not work (I was trying to get the work in the next month). I agreed that if that was the case, then I could work with them on that. In general, we had a very nice, pleasant meeting (at least I thought it was). Collin's wife wanted a picture of the front of the house so I promptly emailed that to them the next business day. They told me it would be a week or so and they would get back to me with an estimate. I was ok with that. The problem was they NEVER got back to me at all. I gave them a couple of weeks, and I sent a reminder via email first and also called and left a message. They never communicated back in any way so they get an F from me, because that's not a way to run a remodeling business. Maybe they have enough work with their existing customers or they didn't want to work with me or do my job - I would have been fine with any of those responses but to NOT call or email back at all is really a problem. That tells me they don't know how to run their business and just wasted my time, so who wants to go into a remodeling job with someone like that? I gave them a D for responsiveness because they did come out to do an initial assessment.

Description of Work
I asked Collin Services to come out and provide an estimate on the following: Replacement of driveway and car portReplacement of front picture windowReplace front doorCreate a new covered porch across the front of my house

DO NOT USE can not show up for a simple estimate

We are here to help you with cleaning your gutters and power wash any thing exterior: such as homes, windows, decks, driveways, doors, roofs, fences, patios, and more. We have 1+ years experience and your satisfaction is our priority. We go the extra mile for your project needs. We are bonded and insured so that you can relax and know that the job will be done right.  …

Collin Remodeling Services INC is currently rated 4.5 overall out of 5.

No, Collin Remodeling Services INC does not offer eco-friendly accreditations.

No, Collin Remodeling Services INC does not offer a senior discount.