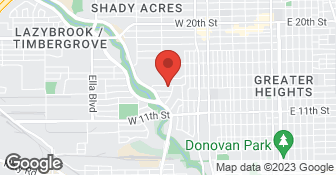 Bayou city renovations is a general contracting remodeling company. we are a one stop shop business that handles all aspects of the job. Rather than our clients go one by one and hire their individual contractors with unknown incentive to do good work or warranty repair if needed choose bayou city renovations, our contractors have all worked for us for years and have every incentive to do good work and want to repeatedly receive repeat work from us. if they dont , they simply can not make the cut...

When the job was completed, the sub contractors did a good job. However six weeks later, I received a letter saying that Bayou City Renovations had not paid the supplier for the shower glass and the glass company was going to put a lien on my house. I paid Bayou City $6915.00 and paid $1200 for tile directly to tile company. Total job cost $8115.00. Bayou City has not responded as to why they did not pay the vendor for the shower glass

Gabe promptly responded to my request for a quote. He visited our home shortly after to do measurements and began work on the project. He gave me timely updates on the progress and built the shelves in their shop over the next week. He arrived on time to install the shelves and do last minute touch ups. The shelves were just what we wanted and look like they came with our home. We couldn't be more pleased with the results.

Description of Work
Built in book shelves were built for our study. The cabinets had 4 shelves, cabinent space at the bottom and adjustable shelves throughout.

The project went very smoothly. Gabe is very professional, responsive and easy to deal with, he is also totally trustworthy having had access to the house while we were away. All his contractors do excellant work.

In the end I was satisfied with the finished product, and I enjoyed working with Gabriel Espinoza, which I can not say about many of the contractors I have worked with. He did an excellent job of showing up when scheduled and keeping me informed on the progress of the work. Gabe also responded well to requests for remedial work when it was needed ... he expressed a genuine desire to see the job done to my satisfaction. My greatest disappointment was in the quote process. The original quote was for $1,710, but the final cost wound up being $3,385. While, given the amount of work that was done, the final cost was probably fair, but I think Gabe could have evaluated the job better prior to providing a quote so there would not have been so many add-on charges after the job was begun. Gabe assumed that the existing frame and posts would not need to be replaced, but when he removed the pickets it was clear that the posts would have to be replaced. If he had checked the condition of the old fence more closely prior to producing a proposal, he probably could have at least provided a contingency estimate that would have alerted me to the possibility of a much higher cost. Additional unanticipated problems were experienced with vines on the fence. Another problem was encountered with the pressure treated pickets that Gabe used for the fence. After the fence was installed the pickets shrank significantly, leaving wide gaps between the pickets. Gabe took remedial action by removing and reinstalling the pickets to close the gaps. Finally, there was a problem with four patio pavers that had to be removed to install new fence posts. I had assumed that if Gabe had to remove the pavers he would replace them, but after removing them he initially said that he did not do pavers and that I would have to get a someone else to replace them. After discussing the matter Gabe agreed to replace the pavers at no additional charge. The only other problem was that the pavers that had been removed could not be found, so I had to purchase new ones myself and I was unable to find any that exactly matched the original ones.

Description of Work
Removed and replaced wood fence. Removed vines that had grown over the fence. Hauled off old fence materials and vines.

The project went very smoothly and I am extremely pleased with the end product. Gabe was great to deal with: On time, very communicative and always willing to listen to any of my concerns. I would certainly work with him in the future!

The remodel went well, contractors showed up on time and completed their work in the timeline specified and for the price specified. Occasional hiccups that are to be expected in any project were promptly addressed by Gabe who has a strong customer service ethic.

They got kind of sloppy towards the end when they had another job come up. They let some details slide which was irritating because I was a customer first. They were very good at first but they let their quality slide towards the end of the job. The plumber he contracted was terrible and I would never let him in my home again.

Description of Work
They remodeled the kitchen and master bathroom in our home.

We were very pleased with the final outcome, and I definitely will call Bayou City Renovations again when we have additional work to be completed. Gabe is easy and fun to work with; he was extremely responsive (returned calls promptly, easy to reach, etc) and invested lots of time making sure the room looked nice and suited our needs. The cost and time estimates were exactly what Gabe had described from the outset.

Description of Work
Bayou City Renovation completed a bathroom for us. The original builder had installed the internal plumbing skeleton but the bathroom was otherwise unfinished. Gabe & crew installed the sink, tub, toilet, and all the plumbing fixtures, tiled the floor and the tub/shower, installed lighting, and painted the room. He also ordered and installed a glass-block window.

On 9/22/07 I filled out an online bid request on BAYOU CITY RENOVATIONS' website. I was never contacted. Then on 10/20/07 I left BCR a voicemail regarding coming out for a bid. They never returned my message. Finally on 10/26/07 I called BCR one last time and spoke with Gabe. He asked me how far along we were in the design process, and I told him that we had started getting bids. He then launched into a lengthy monologue about how he doesn't like to come out for bids until everything is finalized. Fine; I was about to tell him goodbye when he decided to come out for a bid anyway. So we scheduled an estimate on 11/2/07. However on 11/2 Gabe called me to cancel the appointment, and we rescheduled for 11/9. However on 11/9 one of Gabe's employees called to tell me that Gabe needed to cancel again. I never bothered to reschedule. Evidently, returning customer messages and keeping appointments is not a strong suit for this company.

Description of Work
Estimate request for redoing our master shower, adding a new exhaust fan, replacing an old exhaust fan in another bathroom, and a few miscellaneous electrical jobs.

Called Gabe on 10/29/07 and he asked me to submit work needed over website. Thought he could come out the next day so I submitted work needed for estimate on the website immediately after hanging up with him. Have not heard from him since. Looking at other contractors.

UNFORTUNATELY THIS REQUEST DID COME IN DURING A TIME WHEN OUR WEBSITE ADDRESS HAD CHANGED AND NOT BEEN PROPERLY POSTED FOR CLIENTS TO REACH US.

Is your house or business screaming "Wash Me Clean"? If so, you have found the right place. We are a family owned Pressure Washing company that specializes in Commercial and Residential Power Washing services in Houston and surrounding areas. We remove dirt, grime, mold and mildew from houses, buildings, driveways, walkways, curbs, parking lots, fences, gutters, and pools. Give us a call today for a free estimate. Let the professionals at Wash Me Clean Pressure Washing bring the sparkle back to your home or business today!  …

BAYOU CITY RENOVATIONS is currently rated 4.2 overall out of 5.

No, BAYOU CITY RENOVATIONS does not offer eco-friendly accreditations.

No, BAYOU CITY RENOVATIONS does not offer a senior discount.

No, BAYOU CITY RENOVATIONS does not offer warranties.