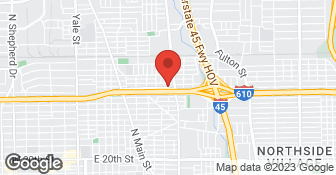 Locally owned & operated. Cost is determined by the job. After hours and weekends by appointment. Licensed and insured. TACLA28539E...

Bayou City Aire recently installed a complete new AC / Heater system in our house (replacing old one) and I couldn't be happier with their service and quality of job they did. I knew we needed a new AC system and reached out to them for a quote along with several others. The quote came back with VERY reasonable pricing, listening to my needs, explaining any questions I had, and not overselling me on more than we needed. The installation went off without a hitch, the workers were clean and professional, and left our house spotless when they finished. They also ensured that all vents were providing the best airflow to each room and the system was working in tip top shape (and I knew how to operate the controls). And the best part, was Angel made sure I had a freon fill for my old / leaking system until the installation could be completed. He was also just a phone call / email / text away if I had any questions or concerns about the quote or my upcoming installation. They totally went the extra mile and I'm glad I went with Bayou City Aire. I highly recommend them.

On time, as agreed. I have used Bayou for 6 years for maintenance. I will continue. Installation very professional under very difficult conditions (heat).

My A/C went out after an electrical storm and I initially called another company, whose owner did a thorough diagnosis but felt that a repair was not the way to go, arguing that it was time for an entirely new system (at much greater expense). While my system is fairly old, I wanted to try the repair option first, so I called Bayou City Aire and got an appointment for the next day. Angel, the owner, was thorough and independently confirmed the diagnosis from the other man, and told me the replacement fan motor I needed could be found and installed within an hour or so. After doing that, he checked the temperature of the air which was not as cold as it should have been and determined that I needed more Freon. He added that to the system and now everything seems to work well. He also provided an estimate for a new system, if and when I want to completely replace my HVAC. Courteous, knowledgeable and reasonably priced.

Description of Work
repair a/c system that had stopped working

I had good experiences with Bayou City before so I called Robert again. As expected he was right on time. He figured out what the problem was and gave me several options on how to fix the problem. Extremely knowledgeable and helpful. Will definitely use again.

Great service, no BS. Replaced capacitor when other services insisted on replacing unit.

Excellent, Angel and his whole crew are extremely professional and timely. He got it all done before we moved in on a tight timeline. Would hire again without even thinking about calling anywhere else

I've used them for my HVAC needs for the last several years. The are professional and responsible people. They treat you very nicely and are easy to work with. They do a good job and give very good service every time. They've been very responsive to needs.

Description of Work
They did a check-up on my heating system.

I had set appointments up with 4 A/C providers. Bayou City Aire was the only one that was prompt, professional, & provided a detailed quote of exactly what I would be purchasing and the service that would be provided now and in the future. Angel, the owner, was responsive to all of my many questions over the course of a week while I was deciding. He made recommendations to exactly what I did and did not need. The installation crew was prompt and professional as well. They were mindful of my home. They did an excellent job, taking care with every step of the installation. Angel checked on the job 3 to 4 times a day. The work took 2 full days in high heat and humidity but that did not deter them from doing a great job. They made sure everything was in the proper working order. They made sure they cleaned up any mess that was made during install. Everyone in the process had been courteous, caring and professional. It is hard to find a service provider that you can feel is truly a business partner in taking care of your home. I was also extremely happy with the price of the work done. Bayou City Aire will be the heating and air provider for my home from now on. They could not have made it a more seamless installation.

Description of Work
I needed to have a whole house new central air and heat system put in a 1949 ranch house in the month of August 2016.

Fantastic. The technician was very professional and efficient. I Will definitely use again.

I noticed my AC unit was not cooling properly. I called Bayou City Aire on a Monday after reading the great reviews; Angel responded that same evening and was very flexible in scheduling someone to come out the next afternoon. He called to verify the appointment the next day and to let me know when to expect his service man, Sal. Sal filled the problem unit with freon, but did not have a seal handy to fix the leak. Angel came out the very next day and installed the seal within minutes. Both Sal and Angel were very courteous and attentive to detail. Will definitely get on a regular maintenance plan with Bayou City Aire.

If you are looking for a trusted electrician in Houston, give Right Touch Electrical a call. The company serves both residential and commercial properties throughout the Greater Houston Area. Offering a full range of quality electrical services, the company’s team is highly trained, well-equipped, and extensively experienced. Additionally, the professional electricians are licensed, background-checked, and drug-tested for your protection. They even wear shoe covers when entering your property to ensure a no-mess service. Call now for any electrical repairs, upgrades, installations, and other large-scale electrical projects such as new construction and remodeling wiring. Right Touch Electrical is available 24 hours a day, 7 days a week.  …

Bayou City Aire, LLC is currently rated 5 overall out of 5.

No, Bayou City Aire, LLC does not offer eco-friendly accreditations.

No, Bayou City Aire, LLC does not offer warranties.