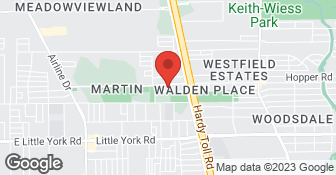 If you need top priority and immediate action for your Emergency Services, ABC Restoration is the one to call for residential or commercial service. When disaster strikes, we are committed to providing prompt, dependable service with 24/7, 365 days a year, including holidays. With our full range of restoration services, we make it a one stop shop for our customers

Phil and his team were incredibly professional. They did a great job, were timely and did very high-quality work. I would highly recommend them to anyone.

Thank you for the recommendation , pleasure to provide service.
5.0

Description of Work
Had to have our home restored as it flooded during Hurrican harvey.

Phil and ABCRestoration was a real pleasure to work with for our fixer upper. I would highly recommend his team, they helped every step of the way and were available whenever I needed them. Great team! Plus, they were very affordable. Would definitely hire them again.

Description of Work
We had a fixer upper and they helped us with our complete remodel, including water mitigation which was not expected during a heavy rain.

The floors were the biggest problem,left to big of a gap at the walls,no moisture barrier was put down over the concrete slab, floor is coming up all over,they came back 4 times and didnot fix the floor.They said i had a water leak and wanted to tear a wall and floor up by using my home owners insurance.The painters complained that the ceiling installers put too many staples in.

My job went amazing! I called in to ABC as I always do and I spoke to thw wonderful office staff and they scheduled for my property to be walked with an ABC Service Writer. ABC called and confirmed the appointment the day ahead of time, and they arrived to meet me on site 10 min. earlier then scheduled. ABC Service Writer was very friendly professional and answered all my questions. Upon the end of my walk through the Service Writer explained he would get a written quote out to me by fax or email or hand delivered which ever is best for me within 24 hrs. We said good bye. I recieved my estimate in full from ABC Service Writer Luke Garcia as promised with in the exact time frame of 24 Hrs as promised. The estimate was very clear on the work and the charges. ABC Service Writer Luke Garcia called me to let me know he had sent me the estimate and asked if I had a moment to review with him or would I like to meet again to review. Mr. Garcia went over each line item in full detail with my and answered all my questions. I approved ABC estimate signed forms all by email made all my selections in which were all brought out to me to choose from, and scheduled my repairs. The crews were on time everyday, they cleaned up everyday the job site was never messy and Service Writer Luke Garcia communicated to me during the entire process. This was not my first experience with ABC, I have done several projects with ABC and I will continue to do business with ABC. I had a property that had a water pipe break and I called in at night and with- in 30 minutes of me calling and leaving a message with the answering service I recieved a call from the owner Phil Bryant and he took all my info and he dispatched out crews to my property, I was very suprised when they arrived that the owner Mr. Bryant arrived as well in the middle of the night!

Description of Work
I am a Property Investor and ABC Restoration handles all my properities. My most recent project was a home that I was getting ready to sale. I had all the interior walls painted, new Flooring Carpet and Tile installed. ABC also performed some Cabinet Repairs as well in my kitchen. ABC took care of some minor plumbing isusses for me as well as some electrical needs. I am very pleased with ABC Restoration and I would call them for all my properities and I would highly refer them to my clients.

Here at ABC Restoration we would like to say thank you for your time and consideration in writing a review on one of the largest and most used websites right now. Angies list. We are extremely happy to be a part of Angies list and want to say Thank You! and we are glad you all are happy with our work. And if you have any questions or concerns Please do not hesitate to call us . And again Thank You for your time.
5.0

On 11-10-14 about 1:30 am I woke up and to my suprise my home had standing water. I was in a panic, When I figured out what to do I got some company listings off Google. I called and spoke to a few companies and gave my info. The first company to return my call was ABC Restoration and they called me about 20 min after I left my information. I spoke to Phil Bryant and as upset as I was he was very calmimg and reassuring to me that I and my home ws in good hands and he could have a 2 man crew dispatched out to me and at my home in about an hour. I answered a few questions and then I waited. About 15 min later I recieved a call from Crew Cheif Benjamin and he told me he was in route and confirmed my address. As stated crew arrived on site with in the hour time frame. They were very courtious, friendly, patient, and explained the entire process and what to expect and what was going to happen in the next few days in my home. They placed equipment, performed demo and sprayed my home. I am lucky enough to have insurance so ABC billed my insurance direct for all the mitigation. I paid my deductible and ABC performed repairs to my home and got us back in order and back to our normal routine. Everything was brought to us and everything all happened as planned by ABC!

Here at ABC Restoration we would like to say thank you for your time and consideration in writing a review on one of the largest and most used websites right now. Angies list. We are extremely happy to be a part of Angies list and want to say Thank You! and we are glad you all are happy with our work. And if you have any questions or concerns Please do not hesitate to call us . And again Thank You for your time.
5.0

All went great. ABC inventoried all my contents packed out and cleaned. ABC also worked with the actual homeowner on the structure cleaning that needed to be done due to the smoke damage. Everything happened fast and professional, and we were taken care of. I would use ABC again and I would refer ABC

Description of Work
I was in a rental home, We had a smoke damage. ABC handled my contents. ABC worked with my landlord and his insurance to take care of the home

Here at ABC Restoration we would like to say thank you for your time and consideration in writing a review on one of the largest and most used websites right now. Angies list. We are extremely happy to be a part of Angies list and want to say Thank You! and we are glad you all are happy with our work. And if you have any questions or concerns Please do not hesitate to call us . And again Thank You for your time.
1.0

They were horrible. They damaged my items, they lost my items, and what they fixed is coming apart. We had some guy that was high on cocaine have a fit in my house and I was going to call the police but my son escorted him out. There is stuff missing, merchandise missing, my dishwasher was damaged in the process, and the list goes on. It is amazing to me that a company can be in this state. They didn’t show up when they were supposed to. Dealing with this company was unbelievable.

Description of Work
I hired ABC Restoration to do work in my home.

Have never had to deal with a contractor, so perhaps they are all like this. (Although I hope not!) We were initially impressed with the contractor who came out to the house and was able to deal with the insurance company directly. Everything else was downhill after this point, however. The project manager assigned to our home would answer phone calls, but never convert this to action. Subcontractors, with the exception of the flooring people, were horrible - caused more damage that subsequently had to be fixed. Had to have several areas of wall redone. Overall: sloppy work, inattention to detail, not responsive. Apparently, the project manager we dealt with is now gone - maybe this will help?

It was really a horrible experience for me and I would never recommend them to anyone. They were very unprofessional, not punctual and used unlicensed people from plumbers to electricians. They did damage the things that did not need to be damaged and it took a very long time. I had to walk them out, 5000 dollars they never paid and it was really a very bad experience. I had to hire someone else to finish the job. I had to have my bathroom remodeled because the shower pane was leaking due to nail holes through the shower pane. The toilet was also leaking and there were many other bad things.

Description of Work
They remodeled the house for me.

Resto Medic provides 24/7 emergency restoration and mitigation services in the wake of a water loss, flood, sewer, fire, mold, and other disasters. We pride ourselves on excellent service with rapid response times. With licensed adjusters on staff to assist with your claims, we provide a comprehensive solution to the entire material damage process. Locally owned and operated in Tomball Texas, Resto Medic offers a 10% discount to all military, first responders, and teachers.  …

ABC Restoration Inc is currently rated 3.3 overall out of 5.

No, ABC Restoration Inc does not offer a senior discount.

Are there any services ABC Restoration Inc does not offer?