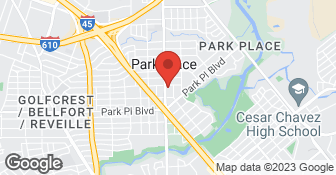 ABC Awning Company was established in 1968 and has built steel carports and metal awnings across Houston and the surrounding areas. ABC Awning Company is there for our customers, first time buyer or repeat customer. Our customers know that ABC Awning is there for them, providing the best quality and service available. ABC Awning specializes in custom steel carports and metal awnings as well as patio covers and screen rooms. ABC Awning company has been owned and operated by David & Debbie Jones for 44 years. We pride ourselves on being a family owned company upholding a pride in our work and our word....

I submitted an email to ABC on their website inquiring as to pricing and availability to install a patio cover. I immediately received a telephone call back from a representative. After speaking with him, he told me that Jerry Hunter would be calling me to set up an appointment for an estimate. Jerry called at a convenient time for me. I scheduled an appointment with him. On the say of the estimate, Jerry called to let me know he was on his way, which would give me enough time to leave work and make it home. He was prompt and very courteous. He gave me several options and suggestions. He knew I was on a budget and he worked with me on the details. I just wanted something simple and cost-effective. Jerry did not try to over-sale me, which I very much appreciated. I chose a galvanized roof with trim and oak leaf posts. I was very excited to know they had the decorative posts I hae always wanted. I knew they would compliment my 1950 house. The materials and installation came out to approximately $1,650. I paid one-half down and one-have after the installation. The installation was right on time and it looks wonderful. I spend all my free time under my new patio cover. I am slowly decorating it, which is a lot of fun. I will be calling Jerry back next year to have a carport installed. I know I won't be disappointed. ABC has been around for a very long time...and my experience with them just confirms why they have been. Also, had I known the cost would be this reasonable and the ease of the installation process, I would have done this a long time ago.

Guy came out and gave an estimated, sounded good so we said to do it. They showed up and installed an 18'x38', 10' high patio cover in one day. 10 years later it is still going strong. This is the 3rd project we have hired them for over a 35 year period.

Sales went fine. The installation went fine. We contacted them on July 15th, July 30th, August 11th, and August 13th of 2015 about some warranty work. We contacted them several times because they would not call us back. We were finally told on the morning of August 13th that they would be out right after lunch. At 1:00pm I called to find out exactly when. The manager "Miguel" told me that he told my wife they would be out at 3:00pm. That's not true. I was listening to the original call. When I questioned him on this he asked me if I wanted them to come out or not. I asked to speak with the owner David Jones and was told he was on vacation. We've gotten the run around from them for the last time. Their customer service after the installation is severely lacking.

Description of Work
They installed a patio cover.

They did a good job. The service is good. The workers were prompt. They are courteous. They picked up everything when they left. I would recommend them to a friend.

Description of Work
They put a car port in.

They're in the neighborhood. They're in this part of town. I've seen other places they did so that's where I got interested and I called them and arranged them to do the work. It is fine. They came, they did the job, and left. I wouldn't have done it if I didn't think it was reasonable.

Description of Work
We used ABC Awning Company to put an awning on.

There were some irregularities to work with (garage, fence, wall, etc., were not all plumbed straight) on this project. ABC Awning executed the design much better than I expected. Placing the middle post was a judgment call because of where the support beams were located above; you had two possibilities. I had to call them to change it to another location because it was difficult to maneuver the car around it. ABC was incredibly responsive and made the adjustment the next day. The work crew was very professional and friendly too. This is my first Angie's review written. I am still shocked how the service and product are too good to be true. With many home projects, I've had many experiences where the vendor is supposed to be excellent but then the "C" or "D" team shows up, not the "A" team, and you just want them to leave rather than get what you wanted. With this, I'm off to have a great day!!!!

Description of Work
ABC installed a carport between our garage and concrete wall. The quality of the result and how the trim metal tied into the 1929 two story guest quarters was amazing; wish we done this many years ago. Selected a slate gray roof top and the neighbors gave a thumbs up for its appearance from their perspective.

ABC Awning arrived on the scheduled date and time and had all the required materials. Believe me, it's very hard work to punch through driveway concrete with a jack hammer and dig the holes for the posts. I helped with removing the concrete and dirt to save time for them. Once the posts were set, the installation was completed the same day, and it's a really nice looking carport. The only problem I had is heavy rain overnight washed out some of the fresh concrete for some of the posts. They said they would come by and patch it, but never showed up. I did the work and it was easy. Overall, they did a great job. A few people stopped by and commented how nice it looked, and asked me for more information.

I have seen their ads in the newspaper for years, and wanted to give them a shot at my business. Contacted them through email and received a call back. Sales rep told me that when he had 3-4 requests for estimates in my area, then he would set up an appointment. I was looking to purchase immediately and get the job completed before the cold season hits. At that time, I told him I would call someone else.

The carport is really nice was not sure what to expect left for work one morning came home after 5pm and it was done ! They did a great job cleaned up afterwards.. very happy !

With over 30 years of remodeling experience, we are here to help you with installing Aluminum Awnings / Screen Rooms Independently owned.  …

Insured and Bonded,Contractors licenses in all required cities, Covers can be engineered and built to all City wind load spec’s and meets the state requirements for the WPI-8 insurance certificates.Our trained sales staff at ABC Awning are experts in designing steel carports, metal patios covers and awnings to meet your specifications and needs. ABC Awning has thousands of customers throughout the Houston and Gulf Coast area that trust us. Call ABC Awning today for your free estimate.

ABC Awning Company is currently rated 4.5 overall out of 5.

No, ABC Awning Company does not offer eco-friendly accreditations.

No, ABC Awning Company does not offer a senior discount.

No, ABC Awning Company does not offer warranties.

ABC Awning Company offers the following services: Insured and Bonded,Contractors licenses in all required cities, Covers can be engineered and built to all City wind load spec’s and meets the state requirements for the WPI-8 insurance certificates.Our trained sales staff at ABC Awning are experts in designing steel carports, metal patios covers and awnings to meet your specifications and needs. ABC Awning has thousands of customers throughout the Houston and Gulf Coast area that trust us. Call ABC Awning today for your free estimate.