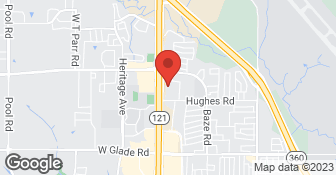 As a buyer or a seller, you want your real estate transactions to go smoothly. That means finding the exact home you're looking for, or selling your home promptly and for the best price. It means not having to worry, even if you're new to the real estate arena, or if you're moving thousands of miles away. You need an experienced REALTOR®. I will put my knowledge and experience to work for you everyday – that’s a promise. Make your choice wisely. The agent you choose will help you make many important decisions. I am here for you every step of the way....

Great! Really enjoyed working with Dana Meeks. She was very professional and real estate savvy. Thought of all the little things we didn’t even think about in thebuying and selling process. Extremely competent would definitely recommend and use Dana again.

Description of Work
Listed /sold and bought a house

If you?re a buyer and you have selected RJ Salerno (Rhett Salerno Sr.) as your realtor, then maybe this review isn?t for you. I met RJ Salerno as he represented a buyer of my previous home, while I was the seller. To make a long story short, RJ Salerno and his buyer accepted my asking price 8 hours upon me listing on MLS. We signed contracts, agreed to a deal, and I accepted earnest money in case the buyer withdrew. After 17 days, the buyer decided to renege on his offer, and pulled out. Obviously, this caused great strain on me and my family as we?d have to start from zero back on the market again?but at least we had the earnest money, right? Despite signing a contract, despite honoring his word, RJ Salerno told my realtor and me through a series of emails (which can be provided upon request), that if we did not release the $1,000 earnest money to him and his buyer, that he would blackmail us by dragging his feet and keeping my title clouded. Anyone who buys and sells homes knows that a clear title is the way to go, and a clouded title adds a whole new dimension and set of rules, as well as prolongs the time for me to sell my house. I owned one house and bought a one new house, and tried to sell the old one. I cannot sustain two mortgages. I signed a normal contract that included earnest money to supplement myself for an extra month of bills, mortgage, and costs, should the buyer pull out (which they did). I don?t have the funds or time to take this through the courts?I just have to have my house sold. I had no choice but to release the earnest money to get my house back on MLS. This disgusts me to no end, as any tax-paying, rule-follower knows that earnest money is placed at the title company as a type of promise. RJ Salerno helped to bilk me out of this insurance and leave me and my house hanging. So if you are looking to BUY a house and want a realtor who is slimy and dishonest, and will have a commission at the top of his mind, I STRONGLY recommend RJ Salerno. If you are a realtor or a seller and have RJ Salerno involved in any capacity, I?d think twice. I?m happy to let you see my contract, email chain, and complaints filed with the TREC (Texas Real Estate Commission) if you?d like. Just send me an email or give me a call. Brad Uptmore braduptmore@gmail.com

Description of Work
Allows a slimy shyster among his otherwise stellar staff-- RJ Salerno is a bully and a blackmailer.

Agent RJ Salerno worked with us off and on for 6 months. During that time he failed to gain an understanding of our preferences and needs. He lacked patience explaining to us as novices what was going on and failed to provide personalized service and listings. The vast majority of houses viewed we brought to him by us. Then when we found a house without his help and bought it without his knowledge he called us and berated us.

Description of Work
Try to find a house.

Handy is an Angie's List national platform partner. With Handy, you can book a transparent, fixed price home service with an independent professional any day from 7 am to 11 pm. Professionals booked through Handy are experts across a range of home services, including home cleaning, handyman services, painting, lawn care, and more. They have collectively performed over 3 million projects across 250 locations. Handy, through the Handy platform, offers technology and information to book home services, but does not itself provide these services. The provision of services is the responsibility of independent professionals scheduled through the Handy platform. Tasks booked and paid for directly through the Handy platform are performed by background checked professionals*, and are backed by the Handy Happiness Guarantee**. Notes: * Handy screens handyman and cleaning professionals that you book and pay for directly through the Handy platform. This process involves: a) Pre-screenings – Potential Professionals must provide detailed personal information, and validate their home service experience. b) Credential Verification – Handy partners with Jumio to use computer vision technology to verify the identification credentials of potential professionals. c) Background Check – The background check screening is performed by Checkr, an accredited third-party background check provider. Checkr's search includes national, state, and county databases stretching back at least 7 years, and longer in certain jurisdictions. The purpose of these checks is to identify offenses that may disqualify potential professionals from using Handy. You can learn more about Handy's screening and background check process at www.handy.com/trust-and-safety ** Handy backs all bookings made through its platform with the Handy Happiness Guarantee. Handy strives to match you with the right pro for you and your home every time. If you're not satisfied with the quality of the service you booked and paid for directly on the Handy platform, Handy will send another pro at no extra charge for your next booking. Additionally, In the rare event of damage, Handy's got your back. Bookings made and paid for directly on the Handy platform are insured. You can learn more about Handy's screening and background check process at www.handy.com/handy-guarantee TEST TEST TEST  …

Buy Any House Thru Me, I'll Sell "Your Home Free”! We offer a 0% Commission program with World Class Marketing for your home. Your Home Free/Team Nelson are ranked #3 in sales out of over 20,000 real estate teams. Team Nelson operates under the brokerage of Your Home Free, LLC. We have Expert REALTORS throughout the Dallas/Fort Worth Metroplex.  …

#1 Agent Companywide for 15 Years*#8 Agent in the World for Homes Sold!

CENTURY 21 Mike Bowman Inc is currently rated 2.8 overall out of 5.

No, CENTURY 21 Mike Bowman Inc does not offer eco-friendly accreditations.

No, CENTURY 21 Mike Bowman Inc does not offer a senior discount.

No, CENTURY 21 Mike Bowman Inc does not offer warranties.

Are there any services CENTURY 21 Mike Bowman Inc does not offer?

#1 Agent Companywide for 15 Years*#8 Agent in the World for Homes Sold!