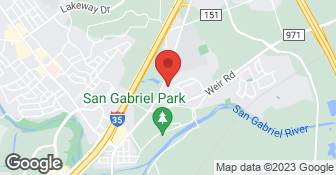 This group came out 4 different times and never fixed my ice maker. In the process their techs both ignored me mentioning that the machine looked to be leaking and the floors below it are now ruined. I spoke with the manager Chase several times and he was worthless and bumbled through excuses. Kevin and Luis were the techs that came out twice each and never could get it repaired. I'm filing a small claim case with the state to recoup the damages caused by Appliance expresses incompetence. I highly recommend never using this company for any repairs.

Leo did a great job. He brought the replacement part to fix the error code and also took the time to explain and answer questions about the other part of the problem, which was a builder install issue with the box and venting to the fan, located in the cabinet above the microwave. Leo's advice helped me explain the problem to the builder's warranty company, and everything is now fixed. I'll definitely call Appliance Express for repair on any future appliance problems--they fix the problem and provide excellent customer service.

Description of Work
Repair for error code on my microwave, still under 1-year builder warranty

Service technician, Lou, arrived promptly at designated appointment time. He installed the appropriate replacement pump for the water dispenser in our Kitchen Aid refrigerator. He also cleaned the coils and inspected/resealed our door gaskets. Lou's kindly manner and attention to detail is very much appreciated. He is an excellent representative for the Appliance Express Company. I would not hesitate to use Appliance Express again.

Great. Jerry called to let us know what time he would arrive and he was right on time. Repaired our problem in about 15 minutes... very professional. Will use again.

Description of Work
Ice maker on refrigerator not working

After door was replaced I noticed clock was not keeping correct time even though technician and I both had rest clock correctly. Turns out that door replacement also requires a circuit board replacement to insure proper function of clock. Technician returned same day to replace circuit board.

Description of Work
Replace microwave door and circuit board. (Labor only charged)

The company was very professional and sent me email confirmations about the appointment. They requested the model and serial number so they could pre-order the parts, and they had the parts available at the appointment. The technician did some basic troubleshooting and found that the expensive part was not needed. He was patient, friendly, and respectful as he demonstrated his troubleshooting steps and explained how he knew that the most likely problem was a $2 light switch. I gave a C for punctuality because he was very late for the appointment due to earlier jobs running long. The office staff was friendly and kept me informed. They gave me an option of rescheduling, but since the renter already had been without a dishwasher for 4 weeks, I did not want to delay any longer. I gave a B for price because the standard service fee was $108. This is about double what a lot of other companies charge. However, it was worth it for the correct diagnosis. The repair itself cost me $2 and 30 minutes of my time instead of $525 for the other provider for a repair that wouldn't have worked.

Description of Work
The dishwasher in my rental home stopped working. Another appliance repair person had diagnosed the problem as an expensive part. After waiting 3 weeks with the part nowhere in sight, I decided to get a second opinion.

The service person was Leo Cantu. He was very professional and performed the repair quickly and well. My wife and I are extremely satisfied and would recommend Appliance Express based on this experience.

Description of Work
Repair of a dishwasher.

We had bought the Extend Warranty (after a "unrepairable" design flaw in the previous refrigerator) and we called the number for that. They put us in touch with Appliance Express, who set up an appointment a week later. The day before the appointment, we got an e-mail saying it would be from 8 to 10. On the day, Luis M. showed up on time, ready to go. He understood the problem, knew how to take the appropriate panels off to gain access to the mechanisms (part of the ice-maker and water to the door), diagnosed the problem (with a little dental mirror), had the part on his truck, and had the whole thing fixed in half an hour. He explained the problem, showed me the cracked part, cleaned up. Very well done.

Description of Work
Our Whirlpool refrigerator was leaking water from the inside ceiling, around one of the LED lights. It started out just a little -- half a cup a week, but increased over time to half a cup a day.

He was polite, professional, and efficient. He was just wonderful.

Description of Work
Our microwave stopped working. It was only 2 years old. The tech that they sent was just wonderful. His name is Leo Cantu. He explained all of our options.

Service person was great! Friendly, knowledgeable and punctual. Answered all questions asked. Followed through with work as stated.

Over 8 years of experience in appliance Repair and Televisions. We work on most brands of Washers, Dryers, Dishwashers, Stoves, Microwaves and garbage disposals. We guarantee our work and offer the best prices in the area. Not working on refrigerators at the moment.  …

In This Hectic, Unpredictable Life We Live in, Today's Appliances Need to be Running, Not Just Most of the Time BUT All of the Time! When Your Appliance is Broke Down it Disrupts the Household. Our Philosophy is: We Are Not Only There to Repair the Appliance, We Are Also There to "Fix" the Client. We Understand if You Have 5 Loads of Clothes Stacked Up and the Washer is Dead, We Are There to Help YOU Through the Repair Process, Getting Your Appliance Up and Running as Quickly as Possible - to Help Get Your Household Back in Order!  …

We strive for the best quality repairs along with the best customer service. Our techs are the best in the business and will go above and beyond on every service call. We offer a 10% discount to military and first responders on all repairs. Call us today for any of your appliance repair needs.  …

Appliance repair for appliances that are in and out of warranty. Appliance express is an authorized warranty service provider for the following brands: Whirlpool, KitchenAid, Inglis, Estate, Roper, Ikea, JennAir, Maytag, Amana, Magic Chef, Admiral and more.

How is Appliance Express overall rated?

Appliance Express is currently rated 4.2 overall out of 5.

What days are Appliance Express open?

No, Appliance Express does not offer free project estimates.

No, Appliance Express does not offer eco-friendly accreditations.

No, Appliance Express does not offer a senior discount.

Are warranties offered by Appliance Express?

What services does Appliance Express offer?

Appliance Express offers the following services: Appliance repair for appliances that are in and out of warranty. Appliance express is an authorized warranty service provider for the following brands: Whirlpool, KitchenAid, Inglis, Estate, Roper, Ikea, JennAir, Maytag, Amana, Magic Chef, Admiral and more.

Are there any services Appliance Express does not offer?