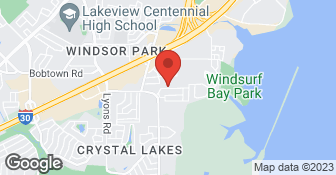 The tankless heater was installed for the agreed upon price. 3G Plumbing failed the city inspection 3 times before passing. The city inspector required the need for a larger gas meter, several gas regulators and vent pipe of which none was initially installed by this 3G Plumbing. Later I started having water heater performance issues and through my telephone conversation with the equipment manufacturer I learned that 3G Plumbing did not install an exhaust vent pipe in order for the tankless heater to be in accordance with the warranty. I had to hire another plumbing company to correct the shoddy work of 3G Plumbing in order for the manufacturer to honor the equipment warranty. Buyer beware! Do not hire this company for tankless water heater purchase and installation. They are not qualified.

I was referred to Ryan by a friend at work. I called Ryan and he was at the house anytime I was available for a walk through quote. I initially needed some 4" sewer replacement as the old 1950's cast iron had rotted out under the house. He came in and looked it over as well as suggested additional work I might need in the future as I had other led and cast iron sewer stuff starting to fail. Most other companies when coming out for a quote will not really get into the details, but rather just quote some standard cost, or even charge you a lot of money to come out, do test, etc., but Ryan took the extra time and steps to really check out what I needed and what the issues really were under my house. After a lengthy discussion about the initial work, I also inquired about cost to go ahead and get rid of all the other corroding cast iron and led, as well as discussed my overall goal of replacing all the old copper pipe in my house and placing a new main shutoff valve. Ryan individually quoted each out for me as well as a total cost package. He quoted a great price for all the services I wanted done on my old house. He scheduled his guys right away and they were out at the house almost the next day starting work. I did a detailed walk through with Ryan before his team started, in order to go over the entire scope of work. He is a great guy, very friendly and personable, and answered any questions I had and made me feel very at ease with the work to be performed. The guys which came out to the house were all very knowledgeable with any questions I happened to have concerning the old sewer and old piping. Due to the amount of work, it took them about 2 days to finish all the planned work. They made sure at the end of each day I had sewer and water working for my home. I would recommend 3G Plumbing and Backflow over other big named companies in the DFW are

Description of Work
Took out old 1950's cast iron cleanouts, as well as 4" sewer line into the house. Replumbed all the old led and corroded cast iron under my 2 main bathrooms. Removed all the old copper water pipes and replaced with insulated PEX as well as placed an outdoor main shutoff valve.

Work was performed as described in offer. Tech explained importance of work being done and evaluated current water heater.

Purchased the $99 deal. Was not contacted within the timeframe specified so a week later I called Angies List to complain. 3G contacted me within 24 hours to schedule an appointment. Things were very timely after that. 3G asked what I needed done and I mentioned I had some spigots needing repair and if any time was left over I had some other very small items. I was told there would only be time to repair the spigots. 3G came out to look at the leaking spigots and mentioned they would have to order parts. I was asked how many I needed repaired, I said "two", he said "We'll call you in a week when we have the parts", never asking where the second spigot was (I have 4 of them.) Total time at the house: 10 minutes. I was called within the week and told the parts were in, when would we like to schedule? Appointment was made, they came out and repaired the spigots. Total time at house: <20 minutes. When they were finished I asked them if they could do some more things since there was still time on the clock. I was told that due to travel time, multiple trips, having to order parts, my 1 hour was used up. Later I received a bill for $62 for parts, $31 per spigot! This was a great opportunity for 3G to gain another customer. Unfortunately I felt they wanted to do the minimum they had to. From my perspective they didn't fulfill the 1-hour of time and the $31/per spigot seemed a little steep. Did they do the job: yes. Would I invite them back for my larger project: no.

Ryan called before time slot & advised approx arrival. On time. Looked at problem , left to get parts, returned & completed work. Both he & his helper. (Sorry, didn't get the red assistant's mans name.) Unbelievable explanation of work + fantastic politeness! Would definitely use these people again. HONEST!!

3G was very responsive when I called to set appointment, was on time and assessed the issue with the sink and repaired quickly. Very impressed with their service!

Description of Work
3G assessed an issue with bathroom sink

They didn’t get back in touch with me and I had to call them. Once I finally got a hold of them we set up an appointment. They day of the appointment they emailed me and cancelled.

Description of Work
They were supposed to come out and fix a leak I have.

We let the homeowner know in the morning of the day of appointment that was set up for late afternoon that we needed to reschedule but that we would be glad to come out as scheduled if that wasn't possible. The homeowner did not give us a chance to make our appointment but scheduled another company.
4.0

They were very polite. They were honest, but they could not complete the work in the time frame I needed.

Description of Work
I purchased a Big Deal for $95 Plumbing Service Call and up to One Hour of Labor.

I am changing out my old refrigerator, which has had a water line, to a new one, which I plan to buy without a water line. The old copper wire needed to be removed, and I had been told by someone last week--long story-- that I would probably need a new seal for the valve. So when I saw the Angie's List coupon for $95 for plumbing visit plus one hour of labor, that was the most cost-effective way to have the work done. I also had questions re general plumbing maintenance, if I had time, per coupon one-hour time, after the plumber did the actual work. Ryan and Chad showed up within the time frame they had given me. Very, very nice people and very conscientious. Removed the old copper wire and said they would be glad to haul it away, which I appreciated. They then inspected the valve under the sink and tightened it and said I did not need to have a new seal, which would have cost, I think he said, $250. So I was glad to hear that. I asked him my questions re plumbing maintenance, which he answered and which was very helpful. He explained that I actually have three valves under the sink, one for hot water, one for cold water sink, and one for a refrigerator line connection. It was this third one that I had been told would need a new seal, but which he said didn't. I also asked about intermediate cut-off places, and Ryan said houses of this age didn't have them, they had started being required under city code after that. And I asked him how to cut off the water in front of the house, and he showed me that . The company really stood out in attitude and conscientiousness. I was very much impressed. I had bought the coupon because of price and because I was trying to get a plumber within a certain time frame, and I found them on the Angie's List Deals. It turned out to be a great decision, both in the work ethic and in the courtesy and honesty of the people who came out. They could have charged me for an expensive new seal, because I had told them I was expecting that one would be needed, but they didn't. I really appreciated their work, as well as their courteous and can-do attitude, and I also appreciated the explanations for the plumbing maintenance that I had had questions on. A-pluses in all categories. Updated 8/5/14: Very severe issues have developed with the work . (updated rating as well)

He tried to upsell to fix another leak for $250! I think they are overpriced.

NxTGen Irrigation & Lawn Care has heard it all from our customers over the years. Do not fall for the trap of the cheapest price or quotes over the phone. Cheapest price normally means: - Poor Customer Service before and after the service call - Inexperienced Technicians - Cheap and inferior parts - Quotes over the phone leads to a bait and switch pricing scheme that will only cost you more. Let NxTGen's experienced licensed sprinkler repair technicians complete a Comprehensive Sprinkler System Check-up of your lawn's sprinkler system to diagnose any issues and even give you upgrade recommendations. Then we will present you with an estimate without all the bait and switch gimmicks. See why over 175+ customers have given NxTGen a high rating on HomeAdvisor. We would love the opportunity to show you what experience and expertise can mean for the overall look of your landscape. Please call NxTGen directly at 469-225-3745 to reserve your appointment today or visit us at www.nxtgenilm.com to schedule an appointment online.  …

How is 3G Plumbing and Backflow LLC overall rated?

3G Plumbing and Backflow LLC is currently rated 4.6 overall out of 5.

What days are 3G Plumbing and Backflow LLC open?

What payment options does 3G Plumbing and Backflow LLC provide

Does 3G Plumbing and Backflow LLC offer a senior discount?

No, 3G Plumbing and Backflow LLC does not offer a senior discount.

Are warranties offered by 3G Plumbing and Backflow LLC?

No, 3G Plumbing and Backflow LLC does not offer warranties.

What services does 3G Plumbing and Backflow LLC offer?