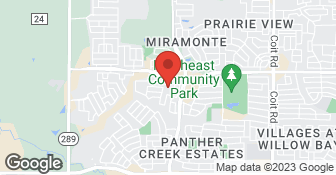 Agape Contracting, LLC serves as a General Contractor for all residential and commerical needs....

I got a referral from a neighbor to give these guys a call. Now let me preface that I bought a 'fixer upper' and have had many a contractor in and out of my home. Some good, some awful. I took a chance and called these folks. I called them and got Jamie. I explained the situation and he put me touch with Brian. I left Brian a message and he called me back the same day. Next day, he came out to take a look at my problem. He then brought out his roofing guy and shot me an estimate via email. All itemized, etc. I agreed and 4 days later there were there. They fixed the leak and it looks great. After they were done, he had taken pictures to let me know what they had done. Also he mentioned some other problems with a couple vents (crappy work from a previous contractor I had used). To me that shows he likes things to be done right. (as do I) He fixed those issues as well. One thing I can say in dealing with numerous contractors is many don't call you back in a timely manner, blow you off until they need a job, never show up on time, etc. These guys were great. Respectful of my time, on time every time, smart, professional. I was impressed and would totally use them again (and plan to)

Description of Work
I had a roof leak around my fireplace. When I bought my home it had a new roof added before I closed. The leak has been going on ever since. The ceiling was covered with popcorn until I had it all removed. At that point, the leak was obvious and was leaking through the sheetrock.

Jamie and his crew were very professional and made sure that everything was done to my satisfaction.

Description of Work
I had a section of fence rebuild and a top rail added to existing fence. They did a great job matching the stain and making the new section of fence look like it was always there.

FreeLite opened in Dallas in 1981 and has served the skylighting needs of the DFW Metroplex ever since. Family owned and operated, we offer the best customer service around. Whether it is a simple replacement or an elaborate installation, we have the skills and experience necessary to get the job done right. We are experts in leak repair and energy efficient upgrades. Experienced both in commercial and residential projects. We work on all types of skylights sizes and designs.  …

We have over 20 years of experience and no job is too little or big for us. We are always customer satisfaction oriented.  …

Spray-Net applies premium custom coatings to provide factory-like finishes to exterior surfaces and interior cabinetry. Our patented custom coatings are specifically formulated to the surface being coated in order to provide premium look and performance on brick, stucco, vinyl siding, aluminum siding, fiber cement siding, doors, windows and cabinets. We also utilize a weather-adjusted application process which allows for optimal adhesion. Spray-Net guarantees its coatings against peeling for 15 years! No other painter has access to our proprietary coatings and processes so no other painter will provide any guaranty like this. Our coating look great and add value. Our brick paint/stain will give you the new color you desire without losing the texture or breathability of your existing brick. Our vinyl, aluminum and stucco paints extend the life of the surface. Our cabinet paints give a finish that is harder and more durable than new cabinets just out of the factory.  …

Agape Contracting, LLC is currently rated 5 overall out of 5.

No, Agape Contracting, LLC does not offer eco-friendly accreditations.

No, Agape Contracting, LLC does not offer warranties.