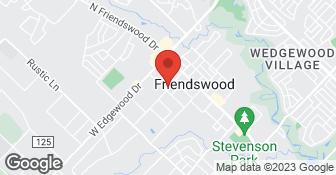 A family owned and operated company that specializes Repair and Installation of Air Conditioning and Heating and in the repair and maintenance of household appliances, including washers, dryers, refrigerators, stoves, ovens, dishwashers, freezers, garbage disposals and icemakers. Financing available. For appliance repair, call 832-347-9255. License # TACLB022838C...

Repairman arrived called and said he was on the way and was here about 15 minutes later. He knew what the problem most likely was and fixed it pretty quickly. Have used them before and will continure to do so.

Jerry called and came out at the appointed time. Our 30 year old Maytag dryer was making loud intermittent squealing sounds, but wouldn't do it when Jerry came out. Very grateful that Jerry didn't want to just start replacing different parts if he couldn't hear the actual sound to tell whether it was fixed or not, so he suggested that we video it the next time it made the noise and send the video to the office so he could hear it. The service call charge would be credited at the follow-up visit (I forget how long that credit was good for, but it was a very fair waiting period). The next time the sound started (only a few days later), we made the video and sent it. Jerry came back out, quickly located the worn parts from the video sound, and replaced them. We've put a number of loads through the dryer the past few weeks, and it's worked great.

I left a message for a repair call on Monday afternoon, labor day. Randy and team called Tuesday AM and came out to troubleshoot Tuesday Pm. The fan had locked up on a 1992 vintage unit and I choose to replace based on their feedback and my concurrence. Installed outside unit only, 3 ton on Thursday am. Randy always does top notch work.

Because my house was destroy by Hurricane Harvey , unit was installed but it would not be working for another couple of months. I am sure it will be just fine.

Went extremely well, they filled out paperwork for my insurance

Jerry looked at the situation and decided we needed a plumber.

Description of Work
Washing machine was overflowing due to clogged drain pipes.

We used him in the past when we had normal air conditioning. He is very good, absolutely wonderful. We just don't have that kind of air conditioning anymore. We do use them at a home we have in Galveston, Texas. They do everything very well. They are very professional.

Description of Work
They did a check up and some repair in the heating.

We tried to dry some clothes and got an F1 error message on the display. I looked on line and found that it indicated a bad circuit board. I called Captains and talked to one of the service men and he said the warehouse had one left, he would pick it up and be out to replace it. Guess I called about 9am, About 10am, Jerry called and said he'd be out between 11am and 12pm. He got here about 11:30am, replaced it and all worked fine. From I time I called until the time he left was only about 3.5 hours. Have used them in the past and have always gotten great service.

Description of Work
Replaced the circuit board in a Maytag dryer

Called the appliance repair number listed on Angie's List. Call was returned within an hour saying Jerry would call back and set up an appointment for that afternoon. Jerry did call back, showed up on time, and knew exactly what the problem was with the refrigerator. Fortunately it was a fairly easy fix that involved melting some ice that had accumulated where it should not have been. He was very careful to make sure that the kitchen didn't get all wet and that everything was cleaned up when he was finished. He answered all my questions along the way. He told me to call him directly the following morning if the refrigerator had not cooled back down as expected. I did not have to as the repair fixed what was wrong.

I phoned the number listed on Angie's list. I was referred to an alternate number for appliance repair. Jerry ( not sure if his name was Jerry that I talked to) called me back promptly, and said he could have someone out the same day to look at the unit. I was very pleased that they could accommodate me so quickly. The tech was here for about 15 minutes and charged me $79 for a service call. He left me a receipt

Beltway Appliance Repair 832-378-2050 same day service in most cases both residential and commercial customers, we can get all your major appliances back up and running, quickly and efficiently. All appliances repaired by certified technicians, all work guaranteed , call today .  …

At Ktrax Pro Appliance we specialize in appliance repair and instillation of both small and large appliances. Same day/emergency service available! Over 5 years of experience, this veteran owned company will fix your appliances at the best price possible.  …

We are an appliance/HVAC service company. We service HVAC, refrigerators, freezers, washers, dryers, stoves, dishwashers, hot water heaters, microwaves. We are a sole proprietor. Been in business for 20+ years. For fast economical service, please call us.  …

Air conditioning repair & install, specializes in appliance repair & maintenance including refrigerators, stoves, dishwashers, ovens, washers, dryers & icemakers. Appliance Repairs on Week Days Only. 24 HR service is for AC and Heat Only. Please do not give us an F rating for not returning your calls on the weekend or Holidays on Appliances

Captain's Cooling & Technical Services is currently rated 4.9 overall out of 5.

No, Captain's Cooling & Technical Services does not offer a senior discount.

No, Captain's Cooling & Technical Services does not offer warranties.

Captain's Cooling & Technical Services offers the following services: Air conditioning repair & install, specializes in appliance repair & maintenance including refrigerators, stoves, dishwashers, ovens, washers, dryers & icemakers. Appliance Repairs on Week Days Only. 24 HR service is for AC and Heat Only. Please do not give us an F rating for not returning your calls on the weekend or Holidays on Appliances

Are there any services Captain's Cooling & Technical Services does not offer?