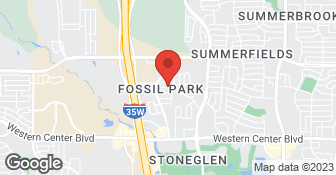 Residential and commercial air conditioning and heating sales, service, and installation company. Payment due upon completion on all services and installations. $89.00 service fee. Service fee waived if repairs made (adding refrigerant and unclogging drain not considered a repair). 24/7 emergency service....

I highly recommend Tyler of 1st Response A/C and Heating. This was the second time I have used him (the other was on my heating unit in October of 2012). He is very professional, both in appearance and character. Seems very knowledgeable, both times I used him he was able to diagnose the problem quickly. He never tried to sell me a new unit (which is all too common these days). He may not be the cheapest, but if you want honest, quality work then you can't go wrong with Tyler.

Tyler was wonderful, very thorough....came earlier then he thought he would which was a PLUS as our A/C was out.....very hot day ......he was professional and did the job well, kept us informed of costs etc etc We will definitely use him again!!!

Description of Work
Put two new capitators in both our A/C's and checked both systems over.....

Tyler was polite, punctual, and professional. The ValPack coupon was for a free pound of Freon with a service call, so it was a great deal. We plan to call him back with any AC issues in the future and would recommend him. Thanks!

Description of Work
One of our AC units didn't seem to be cooling so far this year. We called 1st Response AC after seeing their ad in the ValPack, and Tyler was able to come out the next day, during the time slot we needed. He checked the system and added the needed Freon.

When the smoke detector went off at 2:00 a.m., you are not amused to find it was set off by a leak on a rainy night. The leak only got worse even though it wasn't raining any more. After the roofing guy confirmed that it was not a roof leak, I had to put a call in to an A/C specialist. The drain of the condenser was the only other possibility. I called two companies, but Tyler was sure he could make it that day and the other dispatcher was only and quot;pretty sureand quot; that they could make it out. Tyler was punctual and he and his assistant showed up right on time. They were very careful not to make a mess. They got right to work and confirmed the cause of the leak and what needed to be done. I was very impressed and I would highly recommend Tyler and this company. I am glad I have his number if I need A/C work.

Description of Work
located a leak, cleared the condenser drain

Everything went perfect. Tyler was very professional and informative. The price was a great value.

Provided spring tune up and insepection of a/c units. Tyler forund that we needed a new part and immemdiately replaced it. He and his assistance were competent, punctual, courteous and left a immaculate work site.

Description of Work
Air condtioner inspection and tune up

When my a/c unit went out I was devastated. Everyone knows that in Texas, you need your a/c unit in working condition. Being a single mom I wasn't sure what to do, or if I would be able to afford it. I called numerous companies, then I called 1st Response A/C and Heating and I spoke with Tyler. He was very nice, and offered to come the same day to check and provide a free estimate. He advised me that my ac unit had a leak and that I would need a new one. Tyler gave me a good price and was available to get me on the schedule for the following day. He took the time to explain my different options, and also the warranty that came with the unit. He was on time, and assured me if I had any future problems, he would be out. I would definitely recommend 1st Response A/C and Heating to anyone.

Tyler is responsible, professional, organized, impressive, and so honest, that in small talk with him I mentioned that when it came time to replace my A/C unit, I would be going with his company because of his service. His response was that I should check around and get the best deal I can before I make any decisions. When was the last time a business honestly told you to check their competitors for the best deal before making a final decision on them? Not in a long time for me. How did it go overall? It went awesome, absolutely great again. Tyler is our and quot;go-toand quot; source for HVAC repairs. He's appears to us to be a self motivated professional who, during slow business times of the year, helps out other trade businesses with their work. 1st Response Air Conditioning and Heating should be everybody's and quot;go-toand quot; repair service,but only when we don't need them. Ha Ha.

Description of Work
First time we tried the air conditioner this spring, no air! We had been out all day and with the heat outside building throughout the day, the house was ready for cooling when we got home in the evening. I turned on the air and left the inside blower run for a couple hours, only to see the inside temp climb even higher. Outside I found the a/c unit not running, checked the fuses, and realized I had a problem again. I called 1st Response Air Conditioning & Heating again, and again Tyler answered the phone and the call for help right away. I explained the problem and as we spoke he recalled having serviced it last summer. He said he was on a job about 25 miles away, but should be able to head my way shortly. He did arrive shortly after that, and immediately went to work! Of course as is usually the case with me lately, it worked right away for him without him doing anything to it. But rather than just charging me for a service call and going on his way (it was already well into the evening and he probably should have been off for the day), he meticulously dove into trying to find out what caused the problem I had experienced. He inspected it and insured everything was in working order, then did a minor tuneup on it. I was only charged for the service call (what price can you put on piece of mind for that when it gets looked at by someone you trust), and told if it happened again, the return would be covered by this service call.

He came right over and did a good work. He knew exactly what to do and fixed the problem in about 7 minutes. His price was fair as well.

Description of Work
We have used 1st Response A/C and Heating to fix our air conditioner.

Very reasonable price with quality services. Quote was about 1-2k cheaper than most of the companies out there. The owner comes and inspect the work and makes sure everything was done correctly. I would highly recommend them.

Description of Work
Installed a 5 ton Rheem with 13-seer in the attic. Removed old unit + installation of the new unit. Cleaned up at the end.

Call us today for all your heating and air needs! We are open 24/7 and serve Tarrant & Parker Counties!  …

Free Service Call Maintenance Programs 24/7 Emergency Service Installations Trouble Shooting and Repair Heating & Cooling Systems I love my Job cause everyday there is a new challenge and new problems . I love solving problems but most of all I love helping people, we have been in business over 8 years.  …

We offer fast, reliable air conditioning repair and replacement in Dallas, TX. We are also licensed plumbing and electrical experts. At Xtreme Air Services, we believe in doing right by our customers. That’s why all of our work comes backed by our 100% satisfaction guarantee. We also don’t charge extra for service on nights or weekends. Work with a team that is dedicated to treating you like family. Xtreme Air Services is the leader in HVAC, plumbing, and electrical service in the Dallas-Fort Worth Metroplex. Call Today, Service Today!  …

How is 1st Response A/C and Heating overall rated?

1st Response A/C and Heating is currently rated 5 overall out of 5.

What days are 1st Response A/C and Heating open?

What payment options does 1st Response A/C and Heating provide

No, 1st Response A/C and Heating does not offer free project estimates.

No, 1st Response A/C and Heating does not offer eco-friendly accreditations.

Does 1st Response A/C and Heating offer a senior discount?

No, 1st Response A/C and Heating does not offer a senior discount.

Are warranties offered by 1st Response A/C and Heating?

What services does 1st Response A/C and Heating offer?

Are there any services 1st Response A/C and Heating does not offer?