Bin There Dump That El Paso 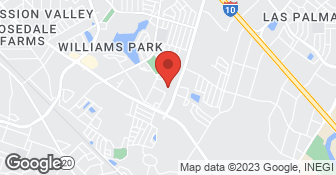 Description of Work
They delivered a bin to our home so we can clean our garage. They were professional, courteous, and punctual. They explained everything and left nothing to chance or guess! I highly recommend them and will use again!

Delivered on time, picked up on time, allowed me some extra time considering my health. Equipment in great shape and the people were absolutely fantastic. We need more companies like this!

Description of Work
April - May 2015: Delivered dumpster for me to fill.

Description of Work
Not provided.

I am in the process of a DIY lawn install so I needed to remove some bad soil and old paver path from my backyard. After a google search for a dumpster rental I was excited when I found this company. I don't own a truck and even borrowed a friends I'd have a hard time lifting wheelbarrows full of soil into a truck bed anyway. So this was exactly the type of service I was looking for. I hadn't heard of them before so I was curious and called them up. Let me just say first off, the customer service lady on the phone was very pleasant to deal with. She was super nice and ready to explain in detail what they offer. The 4 yard is what they use for soil and rock due to the weight but that was all I needed. The bin was dropped off on my driveway and I was able to load it up at my own pace. I know it's their busy season so I figured they might call after a week or so bugging me about the bin was but that wasn't the case at all. I believe I had for two weeks. After I was finished I called them to pick it up and they were there the following morning. This company is 10/10 in my book.

Description of Work
Used the bin service for soil removal.

From the email to the call back, scheduling, drop off and pick up, this company was beyond professional.

Description of Work
I used them in El Paso, TX. Dropped off 8x12 Roll off container and picked it up 2/19/15. The pick up crew even swept the drive way fro me!

Precisely placed in drive way where it would not obstruct vehicle moving, yet was was easy to access.

Description of Work
Provided and delivered 15' refuse bin. I had requested a 10' bin, but 10 footers were out of stock so they delivered the 15 footer at no additional cost. The bin was schueduled for two weeks, but when it rained the last weekend they graciously extended the period for free so I could finish way work. My other option to renting the bin was to rent a U-Haul and take the debris to the landfill myself; this was defininately the better option. No rush, no miles to count, no tricks. Good, honest Veteran owned business that I will use again.

Contractors and bin arrived on time to work on the roof, bin was in my driveway not blocking, they were very professional and neat. Overall, I was very pleased.

Description of Work
Dumpster bin was delivered to my home on 11/18/14 and was used by roofers to remove and dispose of shingles, metal, turbines and trash!

Description of Work
I rented a trash bin from Bin There Dump That to discard house remodeling debris. They were great to deal with.

We requested a 10 yard bin on their busy dumpster season but Bin There Dump That still delivered. We cleaned out our yard and we had some issues with the frequent rain not allowing us to work in the yard. They were very understanding and allowed me a couple more days with the bin. Everyone was so nice starting from Sylvia the initial contact person to the person who delivered and picked up the bin. Everyone was very professional and courteous they went above and beyond, that they made a cleanup pleasurable.

Description of Work
They delivered a 10 yard bin to our home address and set it in the back yard.

Wow!! What a wonderful service!! We had wanted to clean out our garage for years. However, we did not have a truck to haul the junk away not to mention the multiple trips that would be required. I found this company on line. The company offers dumpsters in three different sizes based on your need. The company delivers the empty dumpster and hauls it away when it is full. We were able to keep the dumpster for two weeks which gave us plenty of time to complete the project. We received extremely professional service from the very start. We have told our friends about this wonderful service. I would have rated them A + if that rating had been available. Thank you, Bin there dump that!!

Description of Work
Provides dumpsters for construction debris or other unwanted items.

Everything went great. When I called the staff was pleasant and very informative. They delivered and picked up right on time. The delivery person was very personable and helpful. I have already recommended them to friends and would absolutely use them again.

Description of Work
Delivered and picked up dumpster and provided detailed information on its use.

Description of Work
Left container for old shingles and had new roof put in. Driver was very nice and very clean. I was impressed.

This was the second time I used Bin There Dump That services because the first time I used them, they were awesome and they continue to be awesome again this second go around! I have had a chance to do some comparisons because over the past many years I have used 4 other dumpster companies during our home remodels, landscaping, and two additions. Each time I would always try someone else because of one thing or another. Sometimes it was because they were hard to reach but usually it was because these other dumpster companies would ALWAYS bring a dirty nasty smelling trash container that they didn't bother cleaning before leaving in my driveway. The filthy containers from these other companies were also an eye-sore in front of our home. So when the time came again to call for another Trash Container, I searched and found Bin There Dump That. It was very late in the day when I requested information on-line so I didn't expect to have an answer until the next working day. Then in a few minutes Silvia called.. wow! I was shocked to hear from them so quickly and at that time of day! Silvia was extremely helpful and understanding! She assured me that they would have a container delivered to my residence the next morning.. and they did just that and on time! Tony brought the very clean container on a very nice well equipped truck and very carefully placed the unit where I wanted it dropped. Tony is very friendly, professional and careful.. and not because I asked him to be either! That is just how he did things! Then when it came time to have the container pick-up.. I called Silvia and Tony arrived when she said he would. Then here is another plus.. after Tony loaded the container on to his truck, he cleaned the area where the unit was sitting! It is very hard to find a company these days who care about customer service. I am here to say that Bin There Dump That in El Paso Texas provides true "Cadillac Service". They do not cut corners but they set the bar for others to try and match. I joined Angies List for the purpose of leaving this review because we are moving to another city and felt I should do this before we go. I have already had a co-worker call them too for their home addition. I wished Tony and Silvia were able to provide container services in another city because I would not hesitate to call them again!!! Bottom-line it is not just a trash haul off container.. it is a service! and they do that very very well.. good job guys!!!

It went great. Their dumpsters were clean and delivered & picked up when they said they would be. We called them on the weekends and they provided removals. Highly recommend to friends.

Tony Alarcon the owner was super nice, he was very punctual in delivery on a rare snowy day in El Paso. Tony's friendly service even gave me a veteran's discount & provided orientation on how to best utilize dumpster & location recommendations based on my disposal needs.These are professional services that I rarely find.

Description of Work
needed a dumpster on a very short notice. placed a call to Sylvia, thnx to her niceness and sense of humor, i knew not to make another estimate call!!! My dumpster was delivered the next day by Tony, who i later learned was the owner of the franchise. Tony gave me advice on where to set the dumpster to make the job of putting all our lovely junk into it with minimal work. i called Tony at 1900 that night, not realizing how late it was to schedule a pick up the next day,and tony was still happy go lucky when talking to me after hrs!!! Tony showed up on time for our appointment, and the green dumpster was gone in moments, making me a hero for getting place all cleaned up for a baby shower that afternoon!! ,,,,,, I have never dealt with a more down to earth small business man in my life!! Tony and Sylvia take great pride in there business,, and are very customer friendly!! if anyone in El Paso Tx ever needs a dumpster,," Bin There Dump That" , should be the only call you make!! Thnx Tony and Sylvia!! your business is GREAT!! thnx , Kyle.

Locally owned and operated. Customer satisfaction is our top priority. The quality of our work sets us apart, and we take pride in making sure you are happy with how your project turned out. Give us a call or message us today! We look forward to serving you.  …

Bins fit in a single car space with doors that latch open for easy loading plus a wood protection system is placed between the metal bin and driveway. We can access tight spaces due to our unique roll off system. Contractors have found it beneficial placing two bins in specific locations easily accessible to their employees, rather than one larger unit placed at an inconvenient distance.

How is Bin There Dump That El Paso overall rated?

Bin There Dump That El Paso is currently rated 5 overall out of 5.

What days are Bin There Dump That El Paso open?

Bin There Dump That El Paso is open:

What payment options does Bin There Dump That El Paso provide

Does Bin There Dump That El Paso offer free estimates?

Does Bin There Dump That El Paso offer eco-friendly accreditations?

Does Bin There Dump That El Paso offer a senior discount?

No, Bin There Dump That El Paso does not offer a senior discount.

Does Bin There Dump That El Paso offer emergency services?

Are warranties offered by Bin There Dump That El Paso?

No, Bin There Dump That El Paso does not offer warranties.

What services does Bin There Dump That El Paso offer?

Bin There Dump That El Paso offers the following services: Bins fit in a single car space with doors that latch open for easy loading plus a wood protection system is placed between the metal bin and driveway. We can access tight spaces due to our unique roll off system. Contractors have found it beneficial placing two bins in specific locations easily accessible to their employees, rather than one larger unit placed at an inconvenient distance.