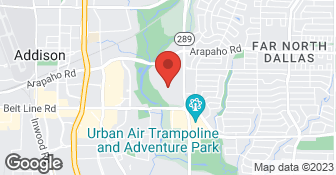 Jerry was very nice and professional. He explained why I needed a deeper clean on my chimney and helped us be able to do that. He was patient while explaining the issues with our chimney. I would hire him again.

I totally was scammed by a NOA Services worker. The moment he walked into my house he said that the cost is $79 but if there is blockage the it will be $259 and if I had a screen over the vent outside then it will be $399. I knew at that point the $79 quote when I made the appointment was just to get the appointment and then hit me up with the higher cost. When he pulled the dryer from the wall he to me that the vent tub from the dryer to he wall was too long and that he was going to cut it. I told him no and to leave it. He said again that it was too long and it needed to be cut and why I don't want to cut it? I told him because I bought it and I don't want it cut. He said fine and that he will leave it. When he inserted his fishing pole like rods up the vent and drilled for two seconds lint came down and he immediately said that there was blockage and the price will be $259 and if there is a screen over the vent outside then the price will be $399. I was thinking no wonder our dryer wasn't drying properly and left him and his helper to do their job. He later asked for a trash bag and a broom to clean up the lint from the vent. When his helper handed me the trash bag I was in complete shock. The bag was tied in a knot at one corner that held enough lint to fit in my hands if placed together. If that was all the lint that came out of our vent how in the heck was there blockage. As I looked back to when he initially placed the rod in the vent and did two seconds of drilling the amount I saw then was actually all that was in our vent. That to me was the $79 cleaning quote I was given when I made the appointment. If any lint comes out during the initial drilling then NOA Services considers that as blockage you will be charged the middle higher price. I do not recommend this company and if I could have I would not have given them 0.5 of a star per question but something was required so I selected the minimum. On top of that their cleanup was 0.5 of a star because there was a layer of lint on the floor, baseboards, and countertops as well as on top of the refrigerator that is also in our utility room. I was charged three times the initial cost for hardly any work done and I had to go behind them and finish the cleanup. Will never set foot in my house again.

I called on a Friday to set up an appointment for the following week. The appointment was for a Tuesday between one and four. So on Tuesday before I left work early I called to verify that the appointment was still good and the technician will be on time. They said yes. At 345 I called them again saying I have not heard anything and it is almost four. The woman said she will have the technician contact me right away. Thirty minutes later still nothing. So I called several times with no answer. Left a voicemail. And now it is the next day I called them again with no answer and have not received a call back. All I see are great reviews which is why I chose them. But I figured people should know that it is not all great.

Expert Frank has the solution for your cleaning job with 20+ years research and development. He's always used new green and powerful pre-treatments to separate the bond between dirt and your air ducts or floor. Then the strength of 325 horsepower engine trucks (superior equipment power) force grime out with professional high heat and deep extraction tools. Only residue free, brighter, cleaner and sanitized spaces are created. You will save time and money with a wide menu of services that can be accomplished in just one appointment. Our family business is dedicated to serving your family from the moment we personally greet you, solve your cleaning needs without pressure, and finish the visit making sure you have seen quality cleaning performance for reasonable rates. Have a refreshingly simple transforming cleaning experience with Cyclone Professional Cleaners. Our clients have endorsed us. A+ Better Business Bureau. Expertise Best of Plano 2021. Three Best Rated 2021, Best Pick Reports 2022. 972-390-8700 https://cyclonepro.com  …

With a name like Dallas Plumbing Company, you may not think of us as air conditioning and heating experts, too. Fact is, in addition to our award-winning plumbing service since 1903, we are also one of the top licensed commercial and residential Heating, Ventilation and Air Conditioning Contractors in the Dallas - Fort Worth area. That simply means we know plumbing, air conditioning and heating and we do it right. Our goal is to earn your trust and keep you as a valued customer from now on. And, we back it up with our 100% Satisfaction Guarantee. Look to us for all your plumbing needs, and let us provide a free estimate on any new heating and cooling equipment you are planning to purchase. If your system needs cleaning or repairing, we can service all makes and models.  …

Homeowners with clogged dryer vents typically experience longer drying cycles resulting in $18-$24 more per month in energy costs. Additionally, over 15,000 dryer fires occur each year, with failure to clean being the leading factor. The trained professionals at Dryer Vent Wizard specialize in cleaning, repairing, altering and installing dryer vent lines. It’s all we do, so we have the right knowledge, tools and techniques to do the job right. An informed decision is the best decision… download our Dryer Fire Warning Signs brochure (PDF below). Additional phone: 972-822-2050  …

All statements concerning insurance, licenses, and bonds are informational only, and are self-reported. Since insurance, licenses and bonds can expire and can be cancelled, homeowners should always check such information for themselves.To find more licensing information for your state, visit our Find Licensing Requirements page.
General Information
Free Estimates
Ask for Details
Eco-Friendly Accreditations
No
Payment Options
Check, Visa, MasterCard, American Express, Discover
Senior Discount
No
Warranties
Ask for details

How is NOA Services overall rated?

NOA Services is currently rated 2.8 overall out of 5.

What days are NOA Services open?

No, NOA Services does not offer eco-friendly accreditations.

No, NOA Services does not offer a senior discount.

Are warranties offered by NOA Services?

No, NOA Services does not offer warranties.

What services does NOA Services offer?