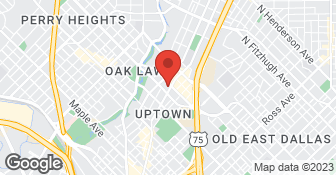 Summary: Started out fine. Even though the price seemed a little high we went forward. The work was probably 95% complete and they never came back to finish. Some of the plants died Eventually they stopped taking my calls even though the plants were under warrenty. I'll never use again and can't recommend. I have dead grass, and dead plants for my $11,000. More details below... Beginning: At the beginning, Heath was very punctual and responsive. He came by several times and gave us a proposal to do the work we were requesting. He was recommended by friends that had had work done by him so we were gald to get a bid from him. While we thought the bid was high, we also thought that he would do good work, so we agreed. Doing the Work: Heath initially estimated that it would take a few days to complete the work: 1 to tear everything out, 1 to prep, and 1 to put everything new in. In actuality it took a couple weeks to complete. They came by and removed everything in day one. Then it rained the next day. This left us with half of the backyard as a mud pit. We understood that the rain caused an issue, but it took them almost two fulll weeks to come back to finish the work. The crew that Heath brought were courteous and worked very hard while they were here. They finished most of the work. They just ran out of grass sod for the last bit of back yard and said they would come back to finish it. It probably would take them 30 minutes to prep and put down the sod that's left. Quality of the plants: We were not super thrilled with the plant quality but he said that the nursery said all the plants were looking like that at the moment. Heath told us that they would replace them no problem if we continued to be unhappy after a couple of weeks to let them acclimate. Getting them to Finish: We called and talked to Heath many times over the next many weeks. He was always apologetic and there was always some crisis going on that kept him from showing up on time when he was supposed to. Eventually some of the plants started dying. Heath finally came back by and agreed that he would replace the plants and finish the sod. Weeks go by and he doesn't come back. It's now almost September and the work was done in first in April. That's 5 months waiting on him to finish probaby 30 minutes of sod work and maybe 1 hour worth of replacing dead plants. Ridiculous. I believe that he's stopped taking my calls now at this point. He has my money after all. Very dissappointed!

Description of Work
They removed old plants in the front planter beds and planted new plants in this bed. They also graded and laid down new sod in part of the backyard.

Organic Lawn Top Dressing & Organic Lawn Fertilization. I started this company to offer an organic, safe lawn application that really gets results. Using our specialized spreaders we spread wonderful rich compost to build your soil in your lawn and landscape. Compost improves the structure and texture of the soil enabling it to better retain nutrients, moisture, and air for the stronger, healthier plants. This organic matter feeds the soil microbes that are vital for good diverse soil environment. Compost helps to control diseases and insects that might otherwise overrun a more sterile soil lacking natural checks against their spread. Compost can save lots of money too - reducing costs of replacing sod and plants, use less water, reduce cost of herbicides, pesticides, fertilizers. Results may vary due to turf and soil conditions. Most people see their turf thicken & bare spots fill in. It usually take a few weeks to begin to see results. Gradually compaction lessens and the soil may even feel softer. Watering needs should go down 30%. When we seed at the same time as top dressing we usually have a good stand of grass in 3 weeks. See our videos on Youtube as well. Website: https://www.earthkindservices.com  …

At Dallas night Lights we are full service decorative lighting service. We are expert designers in decorative lighting and can install on nearly any surface or property. All products are minimally invasive and we only use high efficient LED bulbs Our Landscape Lighting components, and installations come with a LIFETIME Warranty. We also have the ability to install a smart network that will allow all lighting components to be controlled from your phone or tablet. In addition we have color changing abilities for our lighting designs all controlled by the same app. Our services don't end there. We also offer interior decorative lighting, Holiday Lighting, and Permanent Holiday Lighting installations  …

We are a full service outdoor lighting company. We specialize in the design and installation of LED outdoor lighting for homes, landscape, arbors, trees, fountains. We also convert high voltage lights to LED to save money on lamp replacement and electrical cost.  …

We can handle any outdoor design need.

HR Outdoor Design is currently rated 1 overall out of 5.

No, HR Outdoor Design does not offer a senior discount.

No, HR Outdoor Design does not offer warranties.

Are there any services HR Outdoor Design does not offer?

We can handle any outdoor design need.