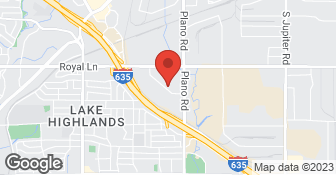 Description of Work
Mike Watson arrived at the scheduled time and listened to my concerns. He did a professional inspection of the area in concern and confirmed the area was properly insulated to R30. He took pictures which he shared to confirm his findings. Another company was trying to sell us $1000+ to do what was always there. I enthusiastically recommend this company and in particular Mike Watson.

Excellent service from Mike Watson coming to provide an estimate to Dion and Jesse performing the work. Dion and Jesse were prepared to come early, which was fine with us. Both were very professional and personable and they finished much more quickly than we anticipated. We recommend them highly.

Description of Work
Added R30 insulation to the attic.

Mike Watson was the sales rep and he was prompt and attentive offering suggestions and alternatives. No long wait time, they were able to schedule within 10 days once I decided to go with them. With all they were doing for me, they thought they could be completed in 2 days and they met that time table. Clean and organized. Friends had referred me to the company and I would recommend them to my friends if they asked for a recommendation.

Overall, the process went well. Mike is the salesman who visited my home and provided the estimate. Other than a late arrival, Mike was professional and explained the impact of the insulation on the comfort of the home but could have done a better job quantifying the energy savings. During the buying decision, Mike was available for questions and followed up in a professional manner. I chose Garland because they were the most competitive on price and met the same service expectations as the other provider. The installation crew were prompt, but there was some confusion at the dispatch because I was not notified that the crew was in-route and had to adjust my schedule. Once the crew arrived, the set up quickly and installed the installation. They quick, efficient, and mindful of not making a mess. They laid plastic down and cleaned up after themselves. I'm looking forward to the added comfort of my home.

Description of Work
Garland Insulating blew 12" of insulating into the attic.

Mike visited my home to provide a quote for adding insulation in my attic (it is quite lacking at the moment), and doing a radiant barrier. He was very polite and professional. He was running a bit behind (about 20 mins), but he did call me to let me know, so it was no big deal (it was a rainy day and traffic was moving slower than normal so I wasn't surprised). He explained quite a bit to me about the products they use, how the process works, what my options were, etc. He took his time throughout the appointment, and was not pushy and did not try to use any 'high pressure' sales tactics. He was straightforward and provided me a verbal estimate on site, as well as a summary sent via email afterwards listing all the options we discussed and the prices. I was happy with the experience.

Mike Watson of Garland Insulating came to my home to measure my walls. He was professional and courteous. He calculated the cost of blown-in Johns Mannville white fiberglass insulation at the above quote. Then he emailed the quote to me. I signed, scanned, and returned the acceptance paper by email. Then on November 26 of this year, Pedro and Lucio arrived shortly after 8 a.m. I explained to them where the insulation was to be installed and they began to work, prepping the rooms with plastic dropcloths for the floor. I had already moved furniture from the wall area and covered everything with dropcloths. Mr. Watson arrived around 9 a.m. to check on the job. He also brought us, me included, breakfast from the local McDonald's. I was still in the process of clearing kitchen cabinets. Pedro and Lucio had begun blowing in the insulation. I think Pedro did this part and Lucio drilled 3-inch holes in the walls. All of this was done from the inside of my home and that was exactly what I had asked Mr. Watson to do. I knew there would be dust, but because the weather was nice, I opened all windows to help with air circulation. Of course, I turned off the central heat and locked the cat in the main bathroom, along with an oil-filled radiant heater for him to stay warm. We ran into a snag when the men made it to the kitchen. Originally, I had planned to remove the backsplash I had installed ten years ago but electrical outlets and all the work involved made it an impossibility. Instead, Pedro said he could blow the insulation from an opening and place it everywhere in the walls. That is exactly what he did. Lucio located the places in the sheet rock that made the opening in the walls accessible. All in all, they were done in three hours. The difference the insulation has made was immediate. There was absolutely no insulation in my exterior walls. The kitchen was always cold because it faces the north. My feet would freeze while standing at the sink. Dishes and all cooking utensils stored in the cabinets were always ice cold. Not any longer! Yahoo! I can hardly wait to see how this impacts my electricity and natural gas bill. My small walk-in closet is no longer a freezer and it is on the south side of my home. The bedrooms are warm and I can set my thermostat to 76 degrees and actually feel comfortable. Another insulating company I found on Angie's List would have charged me more than what I paid Garland Insulating and the insulation they would have installed was cellulose. Also, the other company refused to come to my home to measure my walls. Instead, the salesman and quot;estimatedand quot; the cost and it was over $200 higher. I also did not find Garland Insulating on Angie's List until AFTER I contacted Lowe's. Lowe's gave me the name of a tile man who then asked my permission to share my need with Garland Insulating. Even though I found Garland Insulating on Angie's List AFTER Lowe's helped me, I am completing the review here. Interestingly enough, when I searched for Garland Insulating later, the business popped up. I wonder why I didn't find it first here? I've lived long enough to realize that everything happens for a reason and in its time to happen. God always has His hand in when it comes to meeting my needs. May God bless Mike Watson, Pedro, Lucio, and Garland Insulating now and forever. Amen.

There was nothing I didn't like about them. We would use their services again if needed.

Description of Work
We used the services of Garland Insulating.

*Established in 2008* Efficient Home Solutions' mission as a Dallas AC - Plano AC contractor is to address your most critical heating and air conditioning concerns, which include comfort during our extreme North Texas summer and winter months, without breaking your budget. The majority of your home utility bill comes from attempting to create a comfortable climate for your family, typically 60 to 70% of your energy consumption. Whether your air conditioner and heater are working well or have seen better days, our Dallas AC - Plano AC consultants will make recommendations that can immediately save 30 to 50% off your present utility bills while increasing your level of comfort.  …

Our Manufacturing Operations provide North American builders, home developers, home-owners, general consumers and businesses with over 250 great insulation solutions for energy efficiency. We are committed with our partners, to be the leading manufacturer and provider of thermal reflective insulation and flexible packaging. It is an ambitious goal, but as you explore our website, you will find it within our grasp!  …

All statements concerning insurance, licenses, and bonds are informational only, and are self-reported. Since insurance, licenses and bonds can expire and can be cancelled, homeowners should always check such information for themselves.To find more licensing information for your state, visit our Find Licensing Requirements page.
General Information
Free Estimates
Yes
Eco-Friendly Accreditations
Yes
Payment Options
Check, Visa, MasterCard, American Express, Discover
Senior Discount
NO
Warranties
No

Garland Insulating Ltd is currently rated 4.9 overall out of 5.

No, Garland Insulating Ltd does not offer a senior discount.

No, Garland Insulating Ltd does not offer warranties.