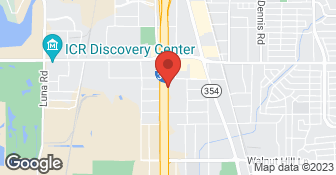 At Custom Stone Granite and Marble we are proud to say “We can customize any slab into your dream slab”. We are dedicated to the fabrication & installation of marble & granite countertops, vanities, table tops and more. Our clients range from homeowners to business owners and everybody receives the utmost integrity and quality service. We serve the Dallas/Fort Worth and surrounding areas with custom designed stone, granite, and marble materials. Our professionals have over ten years of experience in the stone industry and contribute to our reputation for being perfectionists. We treat every project uniquely, pay special attention to detail, and make sure our customers are always satisfied with our service....

The only reason I graded as a B in Punctuality and Professionalism is because the first appointment I had scheduled apparently was not communicated to the person who was supposed to come out. We called to find out where they were and were told that they would have to come out another day. The estimator did come out for the second appointment. The only other (small) thing was when we were planning to look at slabs at the showroom, our contact was a little late meeting us.

Description of Work
We had granite countertops installed in our kitchen.

The installation of the granite went overall pretty well, and this occurred December 2012. They offered a free reseal one year after the installation. So I called December 2013 to get the reseal and couldn't get an appointment until January 2014. Fair enough. The day before the appointment I tried calling the office number and had to leave a message. I called several hours later and the number rolled over to a lady's cell phone that said the mailbox was full. I did not get a call back to confirm my appointment, and even though I was on the schedule, no one showed. I called several times on the day of the appointment and never got to speak to anyone (mailbox full, no answer). I called the next day. Mail box full, or no answer on this phone number. Disappointing. I called two days after the appointment, got the lady and she put me on hold to "talk with the guys in the field". I was on hold for 30 minutes, and she disconnected. The second time I got through to her she said she'd call me back. She never did. I tried calling again, no answer, mailbox full. No ability to leave a message. Very disappointed now. Poor customer service after they have your money. There's no way you'll ever get your free reseal a year after the installation -- I guess I have to be disappointed and deal with my countertops in the condition they are in. Very disappointed and won't use these guys for an install in the future.

Both times this company provided excellent service. They were professional, dependable and the lowest priced of several places we checked. The workers were prompt when they arrived on time and finished with no mess left behind. I will recommend them to anyone looking for granite countertops.

Description of Work
We have used this company twice. Once to redo 5 bathroom vanities in our home and then we recommended them to our sister-in-law to redo her bathroom vanity.

Very punctual. Professional attitude and work. Clean before and after.

[removed member name], thank you for taking the time to review our work. Thank you for choosing Custom Stone Granite & Marble as your fabricator. We truly and greatly appreciate your business. We will continue to work on providing our customers with the best work possible along with great customer service as we look forward in working with you once again in the future.
5.0

John with Custom Stone and Granite came highly recommended by my hardwood installer. Further, his quote was significantly lower than the competition. He was very courteous and answered all my questions patiently (trust me I had my fair share).He was punctual and all the work was completed on time. The end result is beautiful. I would love to work with him again.

They measured the job wrong. They added on extra square footage to the job to increase the price. All other companies' measurements were for significantly less square footage. They seemed to be a little dishonest.

Description of Work
They came out to give an estimate on a granite counter top installation.

John Hernandez was very prompt in coming to our house to give us a very competitive bid. After we hired Custom Stone Granite, they immediately went to work to get us our new countertops and backsplash. They had a great selection of granite to chose from. They took out the old countertops and backsplash and replaced them with the new granite and new backsplash. It took one and a half days. The workers cleaned up afterward and John answered all our questions. I highly recommend Custom Stone Granite & Marble Counter Tops to anyone wanting a great job at a fair price. Mr. Hernandez and his crew were wonderful to work with and very professional.

Outstanding! John and his team are so professional. Not knowing what to expect, they assisted me with the entire process from measuring my countertops, providing a written estimate, helping me pick out granite that would compliment my kitchen cabinets and style. I have received so many compliments and will definitely refer anyone to this company.

Description of Work
Had our countertops replaced with an exotic granite (level 5) and could not be more pleased with the entire process. John came to my house to provide an estimate and within a week the countertops were installed. I had called several other companies that either did not come out when promised or were twice expensive. I would strongly recommend this company!

We are residential and commercial contractors. From custom homes to office buildings and restaurants, we can handle it. We also offer cable and network infrastructure.  …

Hard Rock Imports offers high quality quartz countertops, marble countertops, and granite countertops design, fabrication, and installation in the Dallas and Plano Texas areas. We have over 40 years of combined experience in both natural stone countertops and engineered stone countertops materials like quartz. Our high quality craftsmanship includes our impressive mitered edges and near invisible seams. We service the greater Dallas and Plano areas with our fabrication facilities located in Dallas. Which gives us an edge over many suppliers in the market with better quality control and more competitive pricing. All of our installations are performed by Master Installers. This assures you of the highest level of craftsmanship to maximize the beauty of your home. Our customers range from individual homeowners, businesses, contractors, and multi-unit housing developments. Our focus is on offering quality countertops at the best value in the area. Backed with a 100% satisfaction guarantee! Contact us today for a Free Estimate or to talk with a countertop expert.  …

Custom Stone Granite & Marble is currently rated 4.4 overall out of 5.