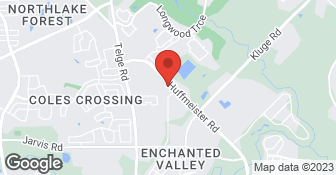 Specialties At Restore Your Door we refinish and restore entrance doors... Nothing in your home gets more attention from a visitor or more neglect from its owner than an entrance door. It is opened, closed, banged and sometimes slammed; yet we expect it to serve us faithfully without much attention for years. A door keeps out the elements, secures our loved ones, welcomes our guests and creates a first impression. But there comes a time when it needs a little help... Restore Your Door provides that help! History Established in 1997 We are now offering Franchise opportunities and serving, Austin, Dallas - Forth Worth, San Antonio. Meet the Business Owner: Marvin M. Marvin Macotto has been in charge of Restore Your Door Since 2004 and since then there has been a lot of improvements. Our in-shop seven-to-ten day restoration process sets us apart from the one-day on site refinishers and costs only a little more. We guarantee the beauty, quality and finish of your restored door. Repairs;Commercial & Residential;1 Year Warranty;On Site Refinishing;Quality-in-Shop Restoration;Wood Door Refinishing Professional Clean Room Finish;Beautiful Secure Loaner Door...

Vendor contacted us very quickly and requested some basic information like door dimensions and photo. A quote was given online. Once we decided to proceed, vendor's employee arrived at designed time to remove door and replace with a temporary. We were told the work would take 1 week, and it did. We got a call on the morning of the day door was to be returned, and the employee arrived at the appointed time. The quality of the work was excellent. We have already recommended the vendor to friends.

Ms.[Member Name Removed]: Thank you for taking the time to write us a review, we appreciate doing business with you!
5.0

They were great, we are pretty satisfied with their work. professionalism was good it was fine. They did a really good job of the our patio door, they really restored the doors and did a great job on that.

Our doors were ten years old and really looking worn. Marvin came and recommended a color. We ended up having them restore not only our front doors, but garage doors, shutters and corbels! Taking the front doors off and restoring them in a shop is the only way to do this! They color choice was beautiful. The project was completed on time as promised. All of the doors look better than when they were new! People stop and look at our doors and continuously rave about how beautiful they look. Great job, responsive service. What a relief to find a company with this expertise and service. Keep it up!

Description of Work
Restoration of Front Doors Plus

It came out very well. They were on time and professional.

Description of Work
They removed my door and put in a temporary one then they refinished and restrained it.

The door looks good...not great..but certainly good. In addition to refinishing my door, they claimed to be experts at making the iron on the door look good again. I asked about their process and they explained it would be partially sanded down, all the chipped paint would be removed, a base coat of rust covering primer would be sprayed and several coats of paint would then be applied. The day after my door was returned, I noticed chipping in multiple places on the iron. No thorough sanding, no primer whatsoever. The chips in the paint revealed virtually no prep work. They had sprayed one coat of paint (drips and all). Very unprofessional job. When I called, they came out right away to get the iron. The responsiveness was very good. Unfortunately, because they did such a terrible job and had to redo it, I had to schedule two more times of meeting them at my house (to get the iron and to return the iron). They still charged me for the iron “refurbishing” despite the poor workmanship, outright misrepresentation, and taking up a lot more of my time. The end product was not good. There are still spots that weren’t painted and had the rust showing through. Overall, I paid way too much and would use another company next time.

They brought a door to temporarily replace the front door and screwed it into place until the refurbished door would be returned. Seemed like the best way to avoid all the issues of cleaning, stripping, re-stain, etc. and running the house with a front door not fully closed (until stain and coatings are dry). We did this before on a previous house on a painted door, but the dry time for stain and coating would be longer, so we decided to use Restore Your Door Houston. All actions and follow-up were as scheduled in advance. Very pleased.

They did a great job refinishing the exterior of my front door. The process was pretty painless....they came and took the front door and replaced it with a dummy door that they secure to the frame. They took my door to the shop to complete the work which probably gives it proper time to dry between coats. They gave me an appointment time for roughly a week later and they returned my door on schedule. It looks great and I’m happy with the service. Thanks!

They came - put up an non-opening replacement door - took my old door away - and when it came back looked like new! The leaded glass had a 'bracing bar' where the solder had broken - so, they rebuilt the leaded glass in the door (looks better than it did new)... Also, the hardware (dead bolt - latch/knob) had lost its finish due to the sun... - they also allowed me to pick out a new hardware set and put that on also... (extra charge of course... and the leaded glass repair was extra - I'm very, very pleased with the result! :-)

They did an excellent job. This is the 2nd time we’ve used this company. They remove the door and take it away, covering the opening with plywood.

Description of Work
Refinishing of our front door exterior

How is Restore Your Door Houston overall rated?

Restore Your Door Houston is currently rated 4.8 overall out of 5.

What days are Restore Your Door Houston open?

Restore Your Door Houston is open:

What payment options does Restore Your Door Houston provide

Are warranties offered by Restore Your Door Houston?

No, Restore Your Door Houston does not offer warranties.

What services does Restore Your Door Houston offer?