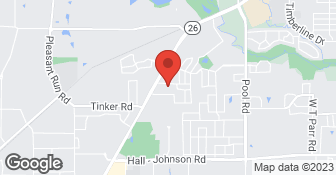 Door Works is a professional garage-door installer that is locally owned and operated. Our strong history of service in DFW began when we opened for business over 20 years ago. Door Works is now a second-generation, family-owned business. Over the years, one thing has remained constant - Customer Satisfaction is our #1 Goal. The priority on each job is to make every new garage door customer a long-time, permanent customer. The greatest compliment our customers can offer us is by telling their friends and family about Door Works and how happy they were with the service we provided....

They were great. They're very good and reliable. We've had them for a couple of years.

Description of Work
They installed a garage door for me.

Service technicians and companies should adhere to two axioms: Repair before replace; and Offer a fair price first. Those are the standards of the technicians at Door Works. The first company I called didn't adhere to those axioms. When the storm knocked out my Liftmaster, overhead garage door opener, I called another company to see if it could be repaired. That repairman came in, pushed the button for my overhead door and said, "You need a new opener." When I asked him if it could be repaired, he said, "No. He offered to replace my garage opener with a Guardian, his company brand. I had a Liftmaster and was only interested in that brand. He quoted me a price of $600 to install a Liftmaster without a battery backup. When I refused, he called his "supervisor" who offered to reduce the price of the install by $100. I then called Door Works. When I told the technician I needed a new Liftmaster garage door opener, he said, "Are you sure it can't be repaired?" He told me that most likely the storm had shorted the circuit board. After I gave him the model number of my unit, he promised to bring a new circuit board to the scheduled an appointment. Given the age of my unit, 2003, he said it would be up to me if I repaired my current unit or purchased a new one. He quoted me a price of $479 for replacement and $200 for a repair. In the end, I replaced the unit. The Door Works technician never tried to sway me one way or another. I decided upon the new unit because it has a battery back up included. I'm so pleased with my new opener. It's whisper-quiet and I know it will give me long years of service. Door Works met the service company axioms: Technicians gave me the option of repairing the unit first and quoted me a fair price first.

Description of Work
After a recent storm, my overhead garage door failed. I could hear the engine trying to work, but it wouldn't lift.

Everything was done quickly and to my expectations.

Description of Work
I have used Doorworks Overhead Door at my residence and at some investment properties. They have always been responsive and price competitive

I called and explained the problem and Jeff came out the very next morning - right on time. He quickly assessed the problem, replaced the sensors and serviced the door and the opener. It works perfectly now - the cost was $160 which included the cost of the service call, which I thought was very reasonable.

Description of Work
Our garage door would not stay down and the sensors weren't working.

I couldn't be more pleased (well, I could if my springs hadn't broken!) After a FIASCO last week where a company gave me a $230 estimate then arrived only to increase the estimate to nearly $500 within moments of arriving for the lowest quality work available, I was pleasantly impressed with everyone associated with Door Works! I received an email estimate from Katie at Door Works for $229 - $249 depending on the size spring needed. I sent pictures of my door/springs and she was able to confirm $249+ tax for both springs. She scheduled me for a quick appointment at my convenience, and was super polite and friendly. Jeff was scheduled to arrive between 3:30 - 5pm today, but called at about 2:45 to let me know he was actually running a little bit early and would be here around 3:15. He was polite, friendly, and immediately confirmed the price and got to work. Within 20 minutes he had replaced the springs, checked the door thoroughly, and said even though it's an old door, it is working well and doesn't need any additional work. (A serviceman who DIDN'T try to upsell me?! WONDERFUL!) He made sure everything was running smoothly, and was on his way -- and my total was exactly what they had promised! I am SO pleased and will definitely use Door Works again for my garage door needs.

Jeff was great He was on time and called before coming. I had a very poor experience with another company that wanted to charge me over 50% more than door works. Jeff was very refreshing, he was honest personable, and efficient. I will definitely use your company again. Please pass on my comments to Jeff, I will request him as a technician next time I need your services Thank you

Everything went well from the initial phone conversation to determine the price all the way to the installation. The doors seem to be very good quality and we would recommend them.

Description of Work
They drove out to Decatur to me at the house to discuss options. Checked door measurements. Ordered new insulated garage doors with windows. I paid a portion of the bill at that time and then the rest when the doors were installed. They also installed the door openers that I already had on hand.

We appreciate the feedback from our customer's completed projects. We will certainly recognize the people involved on this particular install and strive to improve any way we can.
5.0

I highly recommend this company, Jesus was not just top notch, fast, fair, professional ...he fixed all problems and replaced opener within 2 days!

(removed member name) thank you so much for your comments and praise of our team. I will especially pass on these kind words to our technician who performed the installation and repairs. Let us know if there is anything we can help you with in the future.
5.0

They showed up on time, even found our house in the country. They finished on time too!

Description of Work
We had service on our existing garage doors, and front gate. We were so happy with their service, we even had a garage door put on our barn. Did a wonderful job.

After coming home from work, the garage door would not work. I called that evening. Jesus came out the next day. He gave us a repair estimate and a replacement estimate. Because our old door was 20+ years old, we opted for replacement. We had an oversized door, so he had to go pick it up and installed it the next day. It was an easy experience. He was extremely professional and knowledgeable. There wasn't one thing we could complain about. It was a perfect experience.

Description of Work
Replaced our garage door and motor.

Proud winner of the Super Service Award from 2012-2015 & 2011 Contractor of the year through Angie's List! We have grown so much since Family Christian Doors opened its doors in 2003 and are excited for our continued growth! We provide service, repair and installation on garage doors, operators, gates and gate operators. We offer 24/7 Emergency service on garage door repair. We do not charge a service call for any of your garage door needs.  …

Precision Garage Door is a full service garage door company. Our trucks are maintained with a full inventory of parts. Which means we are prepared to repair your garage door in a single visit. Same Day Service Evening & Weekend Service Available At No Extra Charge Emergency Service All Work Is Guaranteed Open 7 Days All Major Credit Cards Financing Available  …

Precision Garage Door of Fort Worth

Precision Garage Door is a full service garage door company. Our trucks are maintained with a full inventory of parts. Which means we are prepared to repair your garage door in a single visit. Same Day Service Evening & Weekend Service Available At No Extra Charge Emergency Service All Work Is Guaranteed Open 7 Days All Major Credit Cards Financing Available  …

All statements concerning insurance, licenses, and bonds are informational only, and are self-reported. Since insurance, licenses and bonds can expire and can be cancelled, homeowners should always check such information for themselves.To find more licensing information for your state, visit our Find Licensing Requirements page.
General Information
Free Estimates
Yes
Eco-Friendly Accreditations
No
Payment Options
American Express, Discover, MasterCard, Visa, Check
Senior Discount
No
Warranties
Yes

Door Works Overhead Door is currently rated 4.9 overall out of 5.

No, Door Works Overhead Door does not offer eco-friendly accreditations.

No, Door Works Overhead Door does not offer a senior discount.