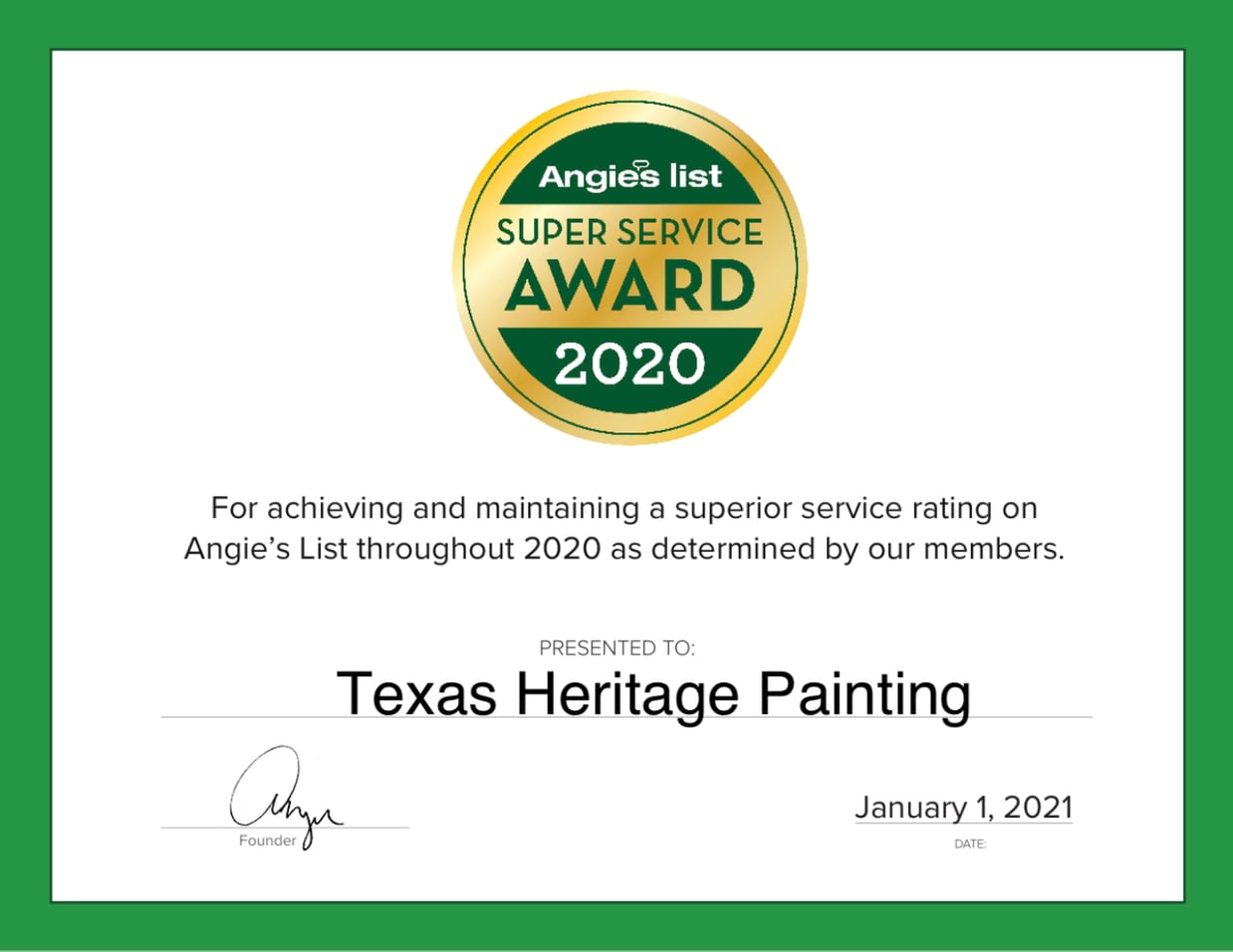 Contact us via phone for the quickest response. We are a Christian Veteran owned and operated paint company. We offer exterior and interior painting for residential and commercial customers. We also offer interior and exterior carpentry repairs, as well as cabinet painting/staining. We guarantee to send you a bid the same day of your appointment, or we will take another $100 off your bid. Receive $300 off full exteriors and 10% off interiors over $1,500. We also offer discounts for police, fire, and military. Check us out on Facebook: “Texas Heritage Painting”....

The entire process was great. Would strongly recommend Texas Heritage and would definitely hire them again. The quote process was very transparent and orderly, even though we requested multiple quotes. Pricing was competitive and quotes were returned quickly. The painting crew was professional, polite, and efficient. They were careful and did an amazing job. There were only minor touch ups requested at the end, which they handled quickly and without complaint. Overall it was a very positive experience!

The whole experience was excellent and professional. I would hire them again.

Great working with Jarrod, He kept in communication and was present completion to walk with me. Highly recommend.

Texas Heritage Painting did a fantastic job painting our home. We got multiple bids for the job, and Texas Heritage Painting (owner Jarrod, and his entire crew) gave us the best quote AND the best customer service, by far. We asked them to paint our exterior, including basically everything except the brick (trim, soffits, gutters, downspouts, garage door, etc.). As part of the job, they replaced a couple pieces of soffit that needed repair. They did a great job all around. After the job, they followed us around the whole home and encouraged us to point out any missed spots or touch-ups, all of which they gladly fixed. Highly recommend!

Outstanding ! I never expected to find someone who would not only share my vision for what I wanted to achieve but also have incredible attention to detail. He strives for total customer satisfaction and I, for one, am completely and totally satisfied. Thanks Jarrod!

Very happy with Jarrod and his crew. They got it done in one day and it’s beautiful!

Everything was great. They did a really good job and the customer service was amazing.

Description of Work
Painting of our garage door and house trim

Did the job quickly and professionally.

Excellent experience. We are so happy about how good our house looks compared to before. Also great customer service with personal attention to detail. As a veteran, it’s also good to know I’m dealing with a veteran-owned business. We also had some interior touch-ups performed.

Jarrod and his people were excellent. He made recommendations to use a different type of siding where the weather exposure was greater, and to replace more siding prone to problems than anyone else (the only reason he wasn't "tops" on price). I was amazed that his crew was able to finish everything that had to be done in one day. This included clearing some bushes that were in the way, removing the worn-out siding and wood, cutting and shaping the new wood and siding, full caulking around windows, and the entire exterior paint job. The results look better than new. Jarrod also came back to touch up the door and went with me to look at the results, even pointing out where the roof vents were painted to protect them, even though that wasn't in the original quote. If you're looking for a competent, punctual, knowledgeable guy to head your repair and painting project, Jarrod's your man.

Description of Work
Well, my HOA was very insistent that the wooden trim around my garage door was too unsightly, and I needed to have it fixed. They've also complained about my need for exterior painting, as my home's paint job was the original from 20 years ago. Also, the siding in the most exposed parts had started to disintegrate due to weather. All that needed to be repaired and painted. This is a 3-bedroom, one story, 1500 sq. ft. house.

Thank you for your amazing review. It was truly a joy helping some one update their home. And get the HOA of their back. Please let us know if you need anything in the future. Your home looks great.
5.0

Jarrod and his team did an excellent job. The transformation of our entire entry way was quite dramatic with just these two changes. We originally talked about and priced out a much bigger job, but decided to do it in stages. The first stage went so well I don’t know if we need stage 2. I will definitely call Jarrod and his team for any future painting needs.

Description of Work
We had a dining room ceiling and walls painted, along with a powder bath.

We are very pleased with the way the entire process went. The paint job looks wonderful. I highly recommend Jarrod and his team and will be using them again.

It went so well that I am using them from now on with all my painting needs. I was desperate for a reliable painter that did a great job and I found it with Texas Heritage Painting.

Description of Work
Had the master bathroom painted.

Jarrod, the owner, was excellent to work with. I had a few estimates and he came out for a quote on a Monday and the work was finished by Friday. I had all the rotted wood replaced on the fascia boards and the entire chimney was replaced with Hardie Board. The work was done in 2.5 days. The two gentlemen that did all the work were courteous and through. The house looks fantastic.

Texas Heritage Painting is one of the BEST companies I have ever hired. I wish all companies had the quality and customer service that THP provides for their customers. Jerrod was on top of things from the very beginning! It was less than 24hrs from the first initial contact that Jerrod came out and gave us a quote on our project. He was willing to make adjustments to our needs and desires...all will a happy heart. The finished results were beyond amazing! They even did a little extra service from the kindness of their own heart. You can defiantly tell that one of their standards is, "leaving a home better than you found it." They went above and beyond. I wish they did other remodeling things besides painting because I would hire them for anything! Thank you Texas Heritage Painting! You have made our year! Every time I pull up to my lovely blue door, I will always think of ya'll and how amazing you were. May the Lord continue to bless you and your business!

Jarrod and his crew did an incredible job! He was prompt and responsive, so helpful and patient with all of my questions! They included much more in the job than I expected, executed it beautifully and all at a VERY fair price! If you need a trustworthy paint crew look no further!

Description of Work
They painted and textured the kitchen. they painted the outside of the house.

Jarrod and his team were great professionals, they did a great job!

Thank you dearly for the review. Not only did your office turn out great, but it was a true pleasure working with another member of our church. We are extremely happy that you are pleased with our work. And we look forward to working together again in the future.
5.0

Everything went very well. The owner came out the first day and did an estimate and ask me for the things that I need to get done. The paint crew did the painting and it turned out great. No complaints.Tthe owner came to check and point things that needs to touch up. He asked the crew to come back to fix little spot that they figured out.

The painting was completed during the week of Thanksgiving 2016. The painters completed painting in my living room, kitchen, dining room, and hall in 2 days. Jarrod completed a walk-thru of my home when the job was completed. Not only did he ask if there were any touch-ups that needed to be completed, he also looked over the work done to see if he could find anything that needed to be addressed. The painters were very professional and I will definitely be using Texas Heritage Painting in the future. I referred Texas Heritage to my parents, who have also used them for their painting needs since then.

Description of Work
Interior painting of walls and trim.