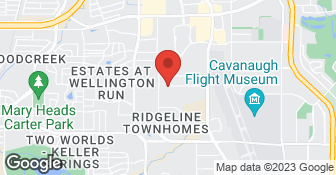 Two guys came, they were very courteous and professional. They told me that I needed 11 sprinkler heads repaired and it would be $700. REALLY??? $700??? The parts cost $2 at Home Depot and 5 minutes to change. Also, they failed to reconnect a whole station so that set of sprinklers for the moment is dead. I've been a satisfied customer for years. Apparently, part of their COVID actions is ripping off their customers...

Arrived on time. Very professional. Expensive as heck. $58 per head to fix problems plus a $95 (reduced to $75) fee for showing up added up to close to $600. I like the people but I'm not going to pay those prices again.

i was disappointed, I specifically told the reservation agent that I needed distance and direction adjustments to sprinkler head that i had flagged in my yard. The crew arrived and did a test of all sprinkler heads and assessment of my irrigation system then informed me my rotors are to old and cannot be adjusted but can be repaired for a significant charge, Beware classic BAIT AND SWITCH .

Andy’s has installed and overseen all my irrigation, lighting and drainage equipment and upkeep for over a decade. They do excellent work. They employ the best equipment. They stand behind their work. Their personnel are prompt, knowledgeable, courteous and listen to my concerns. I’ve never had a bad experience with their service and I highly recommend them.

Your website states they allow a free repair estimate. Andy's representative told me that, in reality, they charge a $95.00 estimate fee and this amount is charged in addition to the cost of any repair work performed.

Description of Work
Repair of a leaking sprinkler system valve

They always do a fabulous job. Think the prices are high but they do great work and always find another issue I didn't catch yet. Wish scheduling was better... Not so far out for service when needed.

Prompt, courteous crew found it in just 15 minutes after I had been trying for days.

We were totally satisfied, They were quick and knowledgeable. Made suggested changes to the work I had anticipated and their changes made for a much better solution. Their prices are reasonable and they found an additional sprinkler head that needed repair. Very satisfied.

I took advantage of a Spring tune-up special for $49, which ended up costing me $270. Granted seven nozzles needed replacing, as tune-ups usually go, but the some of the nozzles (4) were priced at $50 ea. Pretty pricey compared to tune-ups and replacements with other companies.

The techs were great. Friendly and explained everything that they found wrong and advised that several sprinkler heads needed to be replaced. I was unaware of the sprinkler heads and only knew of the underground pipe that was leaking. They got the work done very quickly. The only thing that I don't like is that if you are going to charge me $45/sprinkler head (which is a lot) then you should waive the trip charge. The total work was $440 plus the $95 trip charge. That's excessive with the trip charge stacked on top.

I am a long-standing customer of Andy's. The crew of 3 (led by Derrick) was very professional, friendly, and conscientious (for example, replacing turf as best as possible). Prices were quite high in my opinion. For "Installation of 6" head, nozzle, filter & poly nip/swing pipe" it was $45.90 per, which seems like a lot. Hence, I may or may not continue to be a long-standing customer of this firm.

It all went well, just as expected.

I had the sprinkler controller replaced. I purchased the controller and had them install it. I should have checked earlier, but I was quite shocked by the price they were charging for the install. It was admittedly (by them) a 15 min job. They charged my $150 for the 15 min to install it, plus $95 for trip charge (even though they were doing work, not just coming and inspecting and leaving). Also, since they were not installing their own controller, they offered no installation warranty. So overall, just a really poor deal and there was absolutely no remorse for what they charged for a 15 min job. The alternative was $410 for their own controller (which is also a ripoff if you check online what these controllers sell for) + $45 for trip charge which was not a good option either. I would have been satisfied with the $150 install if the trip charge was waived. But that was not the case. For what it is worth, the tech that showed up was polite and could not do much about the pricing. They also quoted me $45 per sprinkler head to fix some sprinklers. (Another example of their ridiculous pricing). Which I obviously turned down. Pretty disappointed with the pricing overall. I felt ripped off. Certainly don't plan to use them again or refer them to anyone. UPDATE: The owner was very prompt on follow up after I posted the review with my complaint. He explained that his techs follow policy and sometimes a slip up like this one happens. He apologized and offered to refund the service call fee. Which I told him was fair and what I expected. So finally, my sprinkler works fine, payment issue resolved.

I was told that someone would call me back to provide me with an estimate within 24 hours when I called to inquire on pricing for some work I needed done. It is now more than 48 hours since I called and no one has contacted me. If potential clients take the time to research a company and call to inquire about potential work, I would think it would be common courtesy to call back as promised.

The whole experience went very well. Matthew was our initial contact. He worked up the estimates (several, as we kept changing parameters). He set the date and managed the workers. He called daily with updates. They started on Monday, finished on Tuesday, and we did a walk-through of the final installation with Bob on Wednesday, after which I paid the invoice. We were having a problem with rainwater accumulating around the foundation of our house on the northwest side. It flooded the room on that side twice. We already had rock along the west side because grass wouldn't grow there; they extended that rock around to cover the area where there used to be a shed with a concrete floor on the north side. The job consisted of putting in a French drain pipe and a solid drain pipe. Water will accumulate via the French drain and catch basins, flow to the pumps, and be pumped to the street. They tied in 2 downspouts from the gutters as well. One pump is set with a higher switch than the other, to provide additional support as needed. The crew worked efficiently and cleaned up afterward. You can hardly tell where they dug. The pumps are very quiet. We tested them on our walk-through. The cost charged was the same as the quoted price. It was very similar to quotes we received from other companies. Overall, we are very pleased and we would recommend them to others for drainage work.

Description of Work
Needed a drainage system installed to take rainwater away from the foundation.

The technician was punctual and performed the work in an efficient manner. He was able to repair the leak under the sidewalk and replace the two sprinkler heads. He checked the sprinkler operation afterward to make sure everything was working properly. Very satisfied with the work performed and the price paid!

The gentlemen who came to do the work reconnected the faulty zone wiring to the master valve in the sprinkler box and assured me that that will solve the problem. Along with that prepared a list of 12 heads and 4 nozzles to be replaced and quoted $681 for the job. What he actually caused was one zone to run continuously throughout along with one other zone, causing none of the heads to receive the accurate water pressure and therefore not able to water the area each head is supposed to cover! Few days later I notice my newly put in grass that is supposed to be watered everyday is dying because the pressure isn’t enough to reach all areas. Hired another company to fix this mess and make sure all areas were being covered properly for much less cost to me. Waste of time and money in my experience. Will not contact this company again.

Description of Work
One zone was having a wiring issue.

Miguel found the problem and replaced the two valves. He also re-programmed the controler per our instructions. Very professional. The price was high but it was quality work and has a 1 year warranty. I had to wait about 7 days to get them out to do the work. It was worth the wait.

Description of Work
Fixed all sprinkler heads, leaks in pipe

I had been working on the sprinkler system, running the zones and self-diagnosing for two days before I called Andy's to confirm and repair what I had found. On the first visit, two very courteous and professional technicians came out . Unknown to me because I went back into the house, they decided to immediately start with the two zone diagnostics without first testing the entire system to get a status-quo. They came back after digging up the buried wiring harness and some of the wiring going to each zone and confirmed that new wires would have to be pulled to the two zones. Cost: $ 600.00. Shortly thereafter, they then knocked on my door to tell me that two other zones were found to be defective.(!) These zones had actually worked fine the previous two days during my own testing. The new cost: $ 870.00 Coincidentally, these two new zones that were defective had wiring running directly through the area in which the technicians were digging. They had to send another team over the next day to complete the work, and while they were digging, they cut my internet cable. Everything was repaired in the end, but I don't think I should have paid for the two additional zones. Unfortunately, I could not prove that they were working before the initial visit.

They required me to pay for a $99 inspection which was not needed and then fails to inspect an entire zone which had a leak nor did they test or inspect the rain sensor which turns out isn’t working. I counted 3 leaks they missed during their inspection. The cost of repairs was 3 times what I paid for the original installation. Quality of work performed was good however.

We found Andy's on Angie's list and had a great experience. The crew was very professional, cleaned up after themselves and did the work quickly. We have not had a single problem with flooding in the backyard since the work was done. Because of the slope of the yard, we had to lay a pipe from the backyard down the length of the driveway and out to the street. The crew was careful to dig up only the part of the yard that was necessary and they replaced the sod which grew back. Today you cannot even see where the pipe was put in.

Description of Work
We had drainage issues in our back yard which caused heavy rains to dump runnoff into the pool. After searching for plumbers that did this type of work to no avail, a friend suggested we try a sprinkler company.