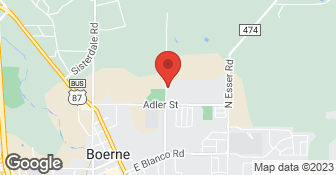 ACB Services are full service Spring Branch, TX Home Remodelers who take pride in a job well done. We settle for nothing but the best in order to deliver unbeatable service.  …

Absolute Power Electrical Contractors, opened its doors in 2005. However, we have built a reputation for quality work with each satisfied customer. As we have grown, we have been careful not to compromise our commitment to quality. Our sense of pride is apparent in every electrical project we complete. Our quality craftsmanship will satisfy the most discriminating tastes and our affordable pricing will surprise even the most frugal budget. Our one on one service is our dedication to your vision. We look forward to speaking with you and understand that this investment in your home or business is an investment in your future. Do not hesitate to phone or e-mail us directly to schedule a time to meet.  …

Legacy Heating & A/C Services is a family owned and operated company. We are a customer service driven company. Our technicians are not commission based. We view ourselves more like educators rather than salesmen. We really care! Let us show you the difference. At Legacy we are concerned with more than just the bottom-line. With Legacy, we are here for YOU! We are here to provide a real service and hold ourselves to a higher standard than anyone else in our industry. Integrity, Honor, Service, Reliability  …

Description of Work
AC service-----REPAIRS instead of "Replace Unit"

They did a great job. I had another company come out and they said that it would cost about $600 bucks to replace, even though it was under warranty. Boerne Air did it for 1/3 the price and did great work. Highly recommended!

Description of Work
Needed a new pump for air conditioner that was still under warranty.

Excellent response and service to make a repair on an AC unit. Signed up for annual maintenance service as well to start this spring. Service call was about $90.00 but with a ten % discount...paid 80.

We were provided Boerne Air Conditioning and Heating name a week ago by a friend. We used them to do a seasonal check of the HVAC units at our home. The tech arrived on time...explained what the was going to do, he was courteous and did a good job on inspecting, cleaning, checking our two HVAC units. Appreciate the cooperation and customer service. I would definitely use them again!

Description of Work
Do check on our two 3-ton HVAC units on our home.

When the A/C unit died at what had been my parents home in Boerne, I called Boerne A/C. Mark came out and looked at the system - which was from 1979 when the house was built. Hoping I wouldn't have to spend a lot, he did some research to see if any parts were available. They weren't of course, but it was great for him to look into it. Mark had a heavy schedule, but he knew I needed a new system quick, and he quickly ordered the inside & outside units, and put in long days to get to my house and get the system installed. There were a lot of obstacles for him (too lengthy to detail - but contractors were doing other work at the same time and some complications sprang up from that causing more work for him than the usual job! I don't think any other firm would have provided the level of service that Boerne AC does. This is an outstanding company and I highly recommend them.

They arrived right as scheduled. They removed the old unit and compressor. Installed the new system. They clean up their messes. My house was as clean when they left as when they got there. They cleaned up the outside yard. I was instructed on how to use the new thermostat and how to maintain the system. The work was completed by 1 o'clock. I was surprised because I thought it would take all day. They appeared to work very efficiently.

Description of Work
I called Boerne Air Conditioning and spoke with Mark (owner) and told him my AC had stopped working. He scheduled an appt for 830am the next morning. They were at my house at 830 on the dot. They assessed the inside unit and outside compressor discovering that my 16 year old compressor unit had locked up. I was given several options on weather it was feasible to repair it or replace the unit. I wanted to replace it so that it would be energy efficient. He took the time to break down the different types of units available and the pricing differences. I was very impressed with the fact that he didn't try to oversell his product. He made sure I understood the different units and their features. I made my choices and he scheduled an appointment the next morning for installation. They arrived right at 830 as scheduled. They removed the old unit and compressor. Installed the new system. They clean up their messes. My house was as clean when they left as when they got there. They cleaned up the outside yard. I was very happy with the services I was provided.

This was unnecessary, professionally-irresponsible communication etiquette. This representative of Boerne A/C could simply have said, and quot;We don't like to 'step on the toes' of our competitors,and quot; and I might have understood. It's possible they're stretched thin with service calls -that I'd understand and gladly call someone else. But he, quite literally, didn't want to hear my concerns regarding the original installers, so quickly thanked me. I could hear his voice trailing off as the receiver was being hung up!

They are very honest, punctual and friendly. The work done is very good.

Description of Work
I used the services of Boerne Air Conditioning probably about 3 years ago. It costed me about $300 to replace the blower part of the a/c.