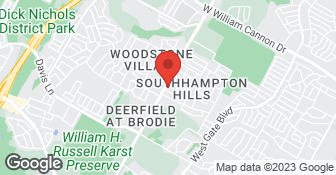 I was put at ease by their staff. I am not a computer expert by any means so I was apprehensive about my transaction. The service was done quickly, less than 24 hours. I had them do more work because I felt confident in them.

Description of Work
Diagnostics, replace hard drive and moved photos and files from one computer to another.

Took my daughter's laptop in for repair. The screen was cracked and needed replaced. Also asked that they run diagnostics and make sure the computer was performing at its best. Dunkin showed me how the screen probably cracked which resulted in a big lecture to my daughter and me purchasing a case from Viacom. Dunkin called and explained the diagnostic test showed the hard drive needed to be replaced. He replaced it with no additional labor charge only the parts. I can't say enough nice things about this place. They provide excellent customer service and are trustworthy. Feel good about their repairs and what they do!

on time with good price

Description of Work
removed virus, cleaned and i bought some cables

They were able to resolve my computer issues. They even stayed past closing time to install additional memory in my computer. I highly recommend their services.

Description of Work
My computer was frozen and I was not sure what the issue was. Vicom gave me an estimate and said they could work on it within a day.

It was good. He was very thorough and he took the time to figure out with the problem was. It did take him quite a bit of time. For the time and effort he put into it, I know I would have spent a ton anywhere else. It did take him a while but it probably wasn't his fault.

Description of Work
I used VICOM PC. He figured out with the problem was.

Great. I had some work on 2 PC's last year. I had a small issue with one of them. I brought it back in. It was fixed the same day at no charge!

Description of Work
I had some work on 2 PC's last year. I had a small issue with one of them. I brought it back in. It was fixed the same day at no charge!

It was a great experience and I will use them again.

Description of Work
I dropped of a laptop that was slow as molasses and they repaired it with software updates and completed the job quickly. The unite is running like new.

Overall, the process was straightforward. The quote was in line with the final price. The work was completed in a timely manner. They provided a means for recycling the old PC. I was pleased and will return if I need PC repair in the future. Thx, Joe Mac

Description of Work
Wife's laptop died. Turned out to be Video chip on motherboard overheating. It was an old computer, so we were not interested in replacing the motherboard. They were able to verify that the hard drive was ok, so all of her data was recovered and they gave me the hard drive. They provided a recycling service for the rest of the laptop.

I live in North Austin and drove all the way to South Austin because of the good reports about Vicom PC. However, I had to make this trip on 3 separate occasions and my computer is still not functioning. Since they did not charge me after my first visit, I felt like they weren't willing to spend much time solving the problems. They had difficulty transferring files onto the new hard drive so they moved data manually which resulted in my having reload some programs and losing my settings. My Bitdefender was removed and AVG and Spybot was added. When I got the computer home, one of the buttons on my keyboard was broken and I was getting 'infected' messages. I also kept getting a message on start up which prevented the computer from operating at all. I returned my computer and some of the issues were addressed but I continued to have the start up problem sporadically. I then downloaded another virus which locked up my computer and shut down the virus protector and forced me into advertisement windows. I returned my computer again and they did not seem to try very hard to correct the problems that I reported. They did not charge me for these return visits but I would pay more if they were able to correct my problems. Currently, I cannot use my computer online without it locking up.

Description of Work
Removal of Viruses and spyware, increased memory and new 1 gig of DDR 3200 RAM.