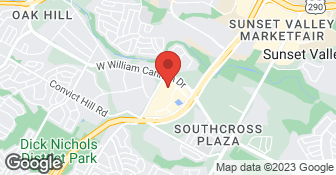 Southern Painting is the premiere residential & commercial painting company in the South Austin area. You can expect courtesy and professionalism from the first phone call, to the last walk-through and follow-up. Let us show you the difference Southern Painting can make on your next home improvement project. The painting teams at Southern Painting have the skills and expertise to provide you with the right interior and exterior painting solutions for your home or office. We start by providing a complete, accurate and complimentary estimate. Our teams will accommodate your scheduling needs and treat you, your property, and your belongings with care and respect. We guarantee and back up our workmanship with our Southern Painting 3-Year Limited Labor Warranty, so you know we will be here, if you need us, even when the work is done.  …

Give us a call today for your painting needs.  …

Hello I specialize in all forms of handyman work I can service equipment as well as many other aspects of the Handyman trade I will be honest up front if you have a request I can not accommodate. I have been in construction since the age of 15 I painted homes for 4 years then moved into the HVAC trades where I spent 20years working. In 2008 when the recession hit I worked for my contractor friend for over a year doing handyman work. I am a owner operated company that keeps this a family business having my 16 year old son helping and my wife when I can. I decided to open my own business after years and years of working for others because I feel I had a better chance opening my own company and growing it into a family business. my goal is to treat my customers like family and provide a 5 star service.  …

The job was excellent. I have used them twice. They are very informative and make sure to clean up when the job is complete.

Description of Work
They did some repairs on the roof.

It was very simple, the roof held up alright and they were very accommodating and on time. I would absolutely recommend them to other people.

Description of Work
They did the roofing and skylights.

Trident provided an estimate on replacing my roof. They were significantly higher in cost than the vendor I chose. In addition, they did not come out when promised and were difficult to deal with.

It is not the goal or policy of Trident Roofing Company to be the cheapest roofer in town. I believe that you get what you pay for, especially with roofing. We install high quality roofing systems using trained professional roofers with proper supervision to insure a positive outcome of every project. Trident Roofing Company delivered all expected deliverables. We had some difficulty sourcing and pricing on a replacement for his custom patio cover. This caused us to delay his estimate, but ultimately, we delivered the estimate.
1.0

Doug came out on April 5, 2012 to take a look at our roof issue and discussed options with me. Said he would get me an estimate by the middle of the following week. Never heard from him or received an estimate so I emailed him on April 11th inquiring about the estimate. He called me the next morning and asked if he could come back out and needed to get on the roof to take a look at a few things. He came out again (April 12th) took a look and said he had a couple ideas and would provide an estimate on both and I should expect the estimate some time the next day. It is now April 27th and still no estimate. I have called him, the main office, and emailed and nobody will return my call or respond to me. Not sure why he wasted his time and mine if he never intended to give an estimate. I would have more respect and would have appreciated that if they determined my job was too small and didn't want to do it, if they had let me know.

Description of Work
No service was performed because they never provided a quote and stopped returning my phone calls and would not respond to emails.

We had a roof that was not properly installed when our house was built. The shingles were starting to pull apart causing a leak in one of our bedrooms. Our insurance company would not pay for this since it was not the results of damage to the roof. Tom showed up early for the appointment to do any estimate. He was very helpful and gave me some tips for financing since he knew we were having to pay for this ourselves. We checked out Trident Roofing with both Angies list and BBB and they had good ratings with both. The workers showed up early to start the re-roofing and stayed late. Since is was predicted to rain that night they made sure the roof was all sealed up before they left. They came back the next day and finished the job. Tom came by several times both days to check on how the work was going and gave me updates. They did an excellent job of cleaning up when they finished and I saw Tom out helping with the clean up. Overall Trident Roofing was professional and I was impressed by the amount of time the owner spent at the job site.

I waited to write the review to see how the roof held up after some rain and I it has rained twice (or so) since April. I got estimates from 3 companies and Trident was one of them. Jack, the company rep. is courteous, professional and knowledgeable. It was such an easy transaction. He answered all my questions. The crew was very large, they cleaned up after themselves and were also courteous and professional. It was a great experience. The roof looks great.

Description of Work
They replaced the roof to my house

They were superb. Can't say enough about them. They were very thorough in all respects. First of all, the guy came out and talked to me in detail about all the types of things we could do, like getting the amount of roofing material exactly right by taking an airiall photo. He said "It may help, it may not. But in my experiences it does. It cuts down on the amount of material. He said that way we have less waste, I have to buy less. Better for you." He came out and personally got up on the roof himself to see what his people had done to make sure it was correct. His people cleaned up all the debris around. Did not find 1 single thing on the lawn at all around the entire house after they were done. They did all the leg work for the insurance company for me. The only thing I had to do was verify some stuff with the insurance company. They basically handled the whole thing. Very knowledgeable. Follow through with everything. They appreciate what you want. They were straight forward. I can't say anything bad about them. They were great.

Description of Work
Applied a new roof and gutters.

Contractor came and performed estimate, agreed upon price and work dates (requested work done within a week and it was done). All work was done on time, professional crew and very pleased with the results. Entire work was performed in timed promised, which was critical. Would refer to a friend. Overall experience exceeded my expectations based on previous contractor work.

Description of Work
New roof with removal of materials and gutter work/redesign.

Great! I met with Jack, he was on time and kept in close contact prior to and after completion. He gave us an excellent quote and the roof looks great! Workers showed up on time and were done in one day, if it were not for the left over shingles in the drive way, we wouldn't have noticed they were even there, besides the great looking roof. After a detailed inspection of my property I found ONE nail, no plants or flowers were damaged, they even put a tarp over the deck for protection. Since, we have had many storms come through and no problems at all. Jack was a "no-pressure" salesman and delivered everything he said he would. He took the hassle out of everything and even filed the final claim with our insurance. Our neighbors are now using Trident as well. Wonderful experience (wish I could say the same about other roofing companies). Would use again in a heartbeat!

Our house had an obvious water leak around the chimney. During rain, water is streaming inside. Because the sheetrock was removed, the water damage to the wood was obvious. From the ground, you can see the roof had a dip where the decking had rotted and sunk in. The flashing around the chimney was damaged and missing (never installed correctly). Steve Wollard came out to examine this, and said he did not see where the problem was. He charged my mother $200 to climb a ladder and inexpertly apply a tube of caulk around the flashing. Already, something seemed wrong, because he wanted a check made out to him personally, not to a company, and would not provide a receipt (although he said there was a one year warranty). It leaked the same way the very next time it rained. We called him to come back, and he brought someone else with. Together they looked at it, and again said it looked fine to them, the only thing they could think to do is add more caulk. I said I was not happy with the work, and he said he would refund half ($100) of the money charged. He never sent the refund. Our next roofer had no problem identifying and repairing the problem.

An apology letter and full refund have been sent to this customer. The manner with which your repair call was handled was unprofessional and ineffective, and I assure you, that is not the way I run my company. Trident Roofing Company has policies in place which prohibit our employees from engaging in side deals with our customers to do work directly for them in exchange for compensation. It costs the company money to generate every lead, and I expect all transactions to be run through the company. Additionally, I employ several qualified repair specialists who do nothing but perform repairs. These individuals are the only ones I allow to perform repairs on behalf of my company. Salesmen are prohibited from performing repairs. After discussing the matter with Steve Wollard and determining that he was aware of our policies, I have terminated him employment with Trident Roofing Company. In so doing, I withheld $200 from his final paycheck to refund the money he received from this customer. Regards, Tom Willi, Owner Trident Roofing Company