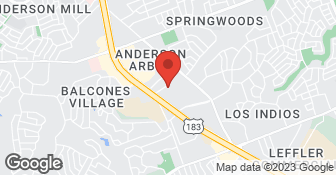 Rooter-Man of Austin, TX is a plumbing and drain cleaning company that's locally owned and operated by The Coucke family. Need Emergency service or just fix a nagging issue? We provide professional services at affordable prices. Our technicians are background checked as well as trained and licensed. Our trucks are equipped with the latest technology; including sewer inspection cameras and test equipment for leak detection. Call now to experience the Rooter-Man Difference....

Problem is water is leaking when I take a shower on my 2nd floor bathtub, down to ceiling of the 1st floor garage underneath it. Plumber came and charge for 335/hr for leak detection/diagnosis. Initially he had to cut through drywall on 1st floor garage ceiling, but could not find leak. Then took out drywall on 2nd floor bedroom to access shower assembly. Plumber showed me leak happens when tub spout divert water to shower, and leak is running to back of tub spout and behind shower wall and down to 1st floor. Give me quote of 850 to fix it, which I accepted. After an hour and he showed me the work. He replaced copper pipe with plastic pipe starting from behind shower head and 3 feet down. But the tub spout did not get replaced. He only put a spoonful of caulk at back of tub spout, so the water leak is redirected to tub. Technically speaking the water leak is not going behind the shower wall and down to 1st floor. But I paid $500 dollars for unnecessarily replacing the shower pipe, and actual problem is still unresolved. Now have to find another plumber to replace tub spout. And find a different contractor to fix drywall.

Representative was considerate and professional. They just didn't have the best price.

Description of Work
I contacted them for a quote. They did not have the right price.

He said that because there were 2 chambers, he would need to charge more. Several companies that I called said that it should be included to clean out both sides. I told him to leave and that I would find another company.

Description of Work
He quoted me $395 to clean out my septic.

Rooter-Man deserves an A++. We discovered that we didn't have working plumbing right after our small grandchildren were dropped off at our house for the day. We were about to take the kids and leave when David showed up so promptly. He quickly cleaned out the sewer line and showed us the problem area. He also didn't seem to mind that he was putting on a show and entertaining the kids. We can't say enough good things about Rooter-Man. After the city returns and fixes their part, we will be calling Rooter-Man back to make sure everything is okay.

Description of Work
We had an emergency as a result of a blocked sewer line. Rooter-Man came out within an hour of being called on Monday morning, which was a holiday. David opened the sewer line and advised us that we needed to contact the city because the city-owned portion of the line was broken.

Pierre helped fix the issue so we could turn the water to the house back on!

Description of Work
Pierre helped to move a blocked pipe so that the valve could be adjusted. As this was a more simple problem than we originally thought, he didn't charge. Really appreciate his friendly and professional attitude.

Pierre was very professional. He arrived promptly on time and did a great job replacing the thermostat on the gas furnace . He also did a great job explaining to me what repairs needed to be done. Lastly, he declogged the drain in the sink,at no additional cost. Overall, very reasonable pricing . Would recommend them again. Very happy with the work

Description of Work
1. Changed the thermostat on the gas furnace 2. Deglogged the drains in the kitchen sink

Rooter-man of Austin came out as a service call through AHS. Originally I called my warranty company over a leak in the AC. The tech they sent out didn't even investigate, he took one look at it and said it was a plumbing problem, so I called AHS and asked for a plumber to come out. Emilio at Rooter-man arrived the following day. He was on time and professional, and although he could tell from the beginning that the leak was, in fact, coming from the AC unit, he still investigated thoroughly. Even though it was not a plumbing leak, he still provided invaluable service. He actually dug up the AC line that was leaking, just to make sure his suspicion was correct. Service at Rooter-man was stellar, and we plan to use them to install a water softener based on our service call experience.

Description of Work
Checked out a leak.

I had a water pipe break on the side yard of my house and had to turn off my water. I called on a Saturday and David was available to come over Sunday morning. He arrived on time and determined the location of the leak and replace the pipe while keeping the part of the yard to be dug up to a minimum. Took less than 2 hours. David was very professional and explained what had most likely happened (ground settling) and added a more flexible pipe to prevent the same issue.

Description of Work
Fixed a broken water pipe between the house and meter.

He did a fine job. He was prompt and professional.

Description of Work
He fixed a leak.

A simple job, and a quick simple process...Chris at Rooter-Man rocks! He took care of our two drain issues in record time, and gave us a fair price without shooting for add-ons....and was courteous and professional from start to finish. You feel comfortable having these guys in your home.

Servicing Austin, Round Rock, Cedar Park, Leander, Hutto, Buda, Manor, San Marcos, Dripping Springs, Spicewood and Bastrop. We specialize in plumbing repair and installation, ac repair and replacement, and all forms of plumbing and HVAC services. From large to small projects, Daniel's Plumbing and Air Conditioning is ready to tackle your toughest jobs. We believe in excellent customer service and guarantee you will be delighted when the job is complete. Our warranties exceed industry standards. Call us today 512-490-6700.  …

Abacus Plumbing, Air Conditioning & Electrical provides high-quality residential repairs, installation and maintenance for all your home's needs. Abacus has been serving Texas since 2003, is accredited by the BBB, licensed, insured and all technicians must pass a rigorous background check, drug screening and maintain a high customer service satisfaction rating. Honesty and integrity are the hallmarks of Abacus, and customer satisfaction is our number one priority.  …

Insured
All statements concerning insurance, licenses, and bonds are informational only, and are self-reported. Since insurance, licenses and bonds can expire and can be cancelled, homeowners should always check such information for themselves.To find more licensing information for your state, visit our Find Licensing Requirements page.
General Information
Free Estimates
Ask for details
Eco-Friendly Accreditations
No
Payment Options
Check, Visa, MasterCard, American Express, Discover
Senior Discount
10%
Warranties
Ask for details

How is Rooter-Man of Austin TX overall rated?

Rooter-Man of Austin TX is currently rated 4.4 overall out of 5.

What days are Rooter-Man of Austin TX open?

Rooter-Man of Austin TX is open:

What payment options does Rooter-Man of Austin TX provide

No, Rooter-Man of Austin TX does not offer free project estimates.

No, Rooter-Man of Austin TX does not offer eco-friendly accreditations.

Does Rooter-Man of Austin TX offer a senior discount?

No, Rooter-Man of Austin TX does not offer a senior discount.

Are warranties offered by Rooter-Man of Austin TX?

No, Rooter-Man of Austin TX does not offer warranties.

What services does Rooter-Man of Austin TX offer?