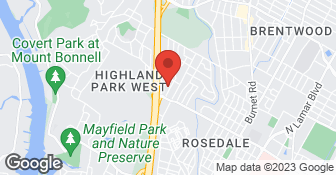 Brice is a Texan who is both a licensed Master driller & Master pump installer. He has over 20 years experience in the industry, specializing in water well drilling & pump services. Brice services central Texas and Hill County. Give Brice a call today!  …

Strand Brothers Service Experts Heating & Air Conditioning has been working with our Austin community for almost 40 years. We specialize in residential service and maintenance, commercial HVAC services, indoor air quality, and plumbing. We also offer many home energy solutions so you can start reducing your heating and cooling expenses. Plus, all of our work is backed by our 100% Service Guarantee for 365 days. That’s our motto: “Expert Service, Guaranteed.” Call Strand Brothers Service Experts in Austin at 512-592-3072 today to schedule your HVAC repair service, routine maintenance or to request a free new system estimate.  …

Health and safety are always our highest priority. In light of COVID-19, we are taking extra measures -- including social distancing and increased PPE/sanitation procedures -- to protect the health of our community and team as we continue to provide service. In short, you can expect the same great service but with some modifications for the protection of all involved. We are a local, family-owned business that has been serving the greater Austin area since 1976. Over the last 40+ years, we have built a reputation for providing high-quality, comprehensive HVAC, electrical and plumbing service. We employ experienced, full-time technicians and don't use subcontractors, so you can expect consistently great quality and service whenever you call us. In addition to receiving extensive training before working independently, all of our technicians must pass a background check, drug test and random drug screening, which many other companies do not require. We hold our employees to the highest standards in order to provide you with the highest level of service. We service and install all brands of air conditioning, but we are proud to be a Carrier Factory Authorized Dealer and a two-time winner of the Carrier President's Award for excellence.  …

They're responsive in hearing out what you want.

Rainbow was great about pumping out the tank, but were unable to handle any of the more complex services. This meant I needed to go to a variety of different vendors for different parts of this job, and find 3 people I could trust, not just one. If you just want your tank pumped, these guys are great - prompt courteous, helpful. If you think you might need something more complicated, look elsewhere.

Description of Work
I had a series of septic issues, which started with the need to pump the tank, then I needed to replace the electric pump, and last but not least, I needed to clean out the lines that led to the septic fields.

Owner is also a licensed real estate broker and she took my call after business hours and discussed the details of my project with me for probably close to an hour. I really appreciated getting the education over the phone and their website proved to be a useful resource as well.

Description of Work
Called Rainbow Septic because I had a bank foreclosure property under contract that had a questionable septic system. I knew less than nothing about septic tanks and they walked me through what the process and costs would be for getting it inspected and possibly replaced. Unfortunately, it is 5 months later and we still have not closed on the property but if we do I'm calling Rainbow Septic

All the details? Okay... My husband had been out of the country for three weeks, and wasn't returning home for another two. One of our dogs injured his back, and I had to keep him caged and try to regulate his meds, which was horrific. I work more than 40 hours a week. In short, I was over whelmed and didn't need any more problems. So, of course, the plumbing backed up on a Saturday night. By Monday, I knew there was a clog somewhere between the house and the septic tank. I spent Monday, calling septic companies and plumbers, leaving messages, and trying to get the problem diagnosed and fixed. I left a voice message at Rainbow Septic. Then I called Spicewood Plumbing (separate review on them), who could send someone out in an hour. Rainbow called me and said they would have someone out that afternoon. Spicewood Plumbing arrived; I told the plumber I was going to have a septic company come out and drain the tank. He said, and quot;As long as I am here, let's have a look.and quot; We found the blowout drain was overflowing, and he thought the septic may be backed up, but call if I wanted him to return. NO CHARGE. Next, my husband calls (from Russia), who said the septic was pumped out 2 yrs ago, so I should get a plumber to snake the line between the house and the septic. What did I know? I cancelled the Rainbow appointment (yes the owner wasn't happy), and called Spicewood to come back out. They snaked the line and it didn't resolve the problem; suggested I get a septic company to come out. I call Rainbow back and explain my misery to the owner; she is understanding and rebooks an appointment for me for that day. Their agent spent A LOT of time digging to find the tank. He unclogged the block (a broken clean out pipe cap), pumped out the tank, and charged me an extremely reasonable amount. I will be calling Rainbow again if needed.

Description of Work
Unclog septic inflow and pump out tank.

I first spoke with Janice Witt last year when I put my house on the market last year. I selected Rainbow because she had a good Angie's list rating and her inspector was on the Hays County approved inspector list. Ms. Witt is an absolute treasure trove of information and one of the nicest people I have dealt with in the service industry. We talked and laughed like old friends and she advised me not to have the tank pumped until we had a buyer because the system would have to be inspected at that time. She researched my tank's history and sent me all the information she found as well as a list of services and pro\ices. It turned out that we decided to stay here for another year and I filed her information. I put the house back on the market this year and as soon as I got a contract I was on the phone to Rainbow to schedule the inspection and pump out. This time I was treated to a talk with her sidekick, Barbara, who was equally helpful and friendly. Ladies (gents too), if you have to arrange these services and you know next to nothing about septic systems (or even if you do), don't hesitate to call these wonderful gals and trust them to give you the lowdown. The only difference this year was the pumping fee went up $5.00, unbelievable given how prices have risen on everything else in this world. The inspector and pumping tech were right on time. We had already uncovered the hatch and a good section of the tank so I did not have to pay any finding/digging fee. They went straight to work but were more than willing to answer any questions. Mr. Tom Wilkins, the inspector, was very knowledgeable and gave me several tips as well as corrected some bad advice I had been given about the need for enzyme additives. Since I have a septic tank at my new home, I was extremely grateful. They do not do repairs that they suggest since they see that as a conflict of interest (Yes, they are ethical too!). They do recommend someone who does the kind of work you need but then it is up to you. They also e-mailed my report the next day so I was able to start working on the recommendations! In a nutshell, they are very competitive in price, timely, conscientious, knowledgeable, and just plain nice folk. Both Janice and Barbara made me feel more comfortable and free to ask any questions I might have. No, I am not related to any of them but I would be glad if I was, judging by my experience with them. Do yourself a favor,if you need septic services, give Rainbow a call.

There was great communication with the company, as far as scheduling and keeping me informed of the whole process. The company was very professional and prompt with getting the inspection report back to me.

Description of Work
I had Rainbow Septic do a septic inspection and pumping for a house that I was rehabbing. They were able to do this without me being there, which was very helpful.

All aspects of our service were very professional and responsive. They were not able to repair our tank, but referred us to another business. They did not seem to know that their page on Angie's list indicated that they offered a 10% senior discount. THey did give a small discount, but it was not 10%. We are getting back to them with the documentation on this site.

Their service was excellent. They were very responsive. I would use them again in the future.

Description of Work
They inspected, emptied and cleaned our septic tank.

The job went smoothly, lengthened in time only by the difficulty in pumping out the septic tank caused by the vertical height the sludge needed to be pumped up to the pump truck. Jack Phipps of Rainbow Septic kept me informed of his expected arrival time at the property to I did not need to wait for him. He gave me a complete verbal report at the scene, later followed by a written one. He seemed very knowledgeable about septic systems in general and gave me advice on how to maintain the one at the property. He noted a possible problem coming from the house that needed attention.

Description of Work
As part of pre-purchase inspection of a house, I had the septic tank inspected. This involved opening up the hatch to the tank, pumping out the tank, and checking the general condition of the tank, leach field, and inspection ports for the infiltrator panels.

They scheduled the job, came exactly on time and did a good thorough job at a very competitive price. I have used this company four times for both repair and cleaning over the past six years at my personal home and at rental properties. They are always professional and friendly. It is the only septic company I will use.

Description of Work
Rainbow pumped out a septic system at one of our rental properties.

If it has to do with septic we can assist you!