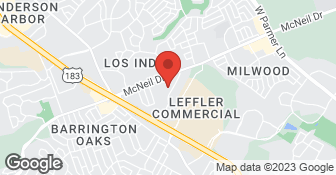 Northwest Fence and Iron has been manufacturing and installing iron fencing and gates since 1992. We also install wood and chain link fencing as well as rock columns and retaining walls. In 2008 we began manufacturing custom outdoor furniture. We employ 45 people. We utilize both in-house and subcontractors depending on the job. We are an A+ member of the Better Business Burea and have been a member of the American Fence Association for over 15 years....

Came out to house, measured, said they would get back to me by the following week. Never followed-up, never sent estimate.

Description of Work
Estimate for Gates Fabricated and Installed

Spoke with Caleb via phone, booked appointment for 9am Tuesday morning for him to come out and review work to be done, provide a quote. On the day of appointment Caleb was a no show, hour went by no calls. I left voicemail at 10.30 asking for call back. Left another message the next day asking for callback to reschedule appointment. No reply.

Worked with Alan at Northwest Fence and Iron. We were fixing our upper outside balcony and needed to remove the wrought iron fencing. It was in desperate need of repainting or replacing. Alan worked with us on choosing the best route of either repainting or replacing. Since we needed to have it removed anyway, it was cheaper to have a new one installed. They were very professional and worked with us on the timing for installation since we were working with several contractors. We would definitely recommend them and would work with them again.

It was a small job and we had trouble generating interest. NW Fence made a fair bid and did what they said they would do. However, when dealing with them, be aware of a couple of things. The crew of 2 arrived and showed up in our back yard without calling or ringing the doorbell. They left without checking in. If you decide to deal with them, be sure you get all the details right. Don't assume anything. And ask them to communicate.

They had good customer service and their pricing was very competitive.

Description of Work
We used Northwest Fence and Iron. They did a new wrought iron fence installation.

The service went very well. They built the fence to our specification and we were satisfied with the outcome of the project. They ordered the parts for the fence for us. The staff showed up when they were supposed to. I was not home while they did the service. We worked with Mark Miranda closely on the project. They completed the job in about 1 day as far as the installation goes. I never had any issues with getting in touch with the company or scheduling the service.

Description of Work
I hired the company to build an iron fence around the house.

We were very pleased with this transaction, and the service provided by this company. It was easy to schedule a free estimate for the work, and the technician arrived on time and provided a written estimate within 24 hours. The iron rails were custom-made, and the materials arrived earlier than expected, so the installation was done sooner than promised. The installers were hard-working and professional. The rails look great! We are very pleased with the finished product, and very happy with the service provided!

Description of Work
The company installed approx. 80 ft. of wrought iron railing on our large outdoor deck. They removed and hauled off the old wooden rails, and properly cleaned the premises.

We had Marc come and check out the property on a Fri in May to give us a bid. After spending a half hour or so taking measurements he said he'd have the bid sent by the following Tues. A week later he still hadn't responded so I called the office. They assured me I'd receive it within 24hrs. No luck. Now it's June, and I still have not received a call nor an estimate. It's a shame, but I will never use these guys.

Description of Work
Requested an estimate

Description of Work
None performed, didn't show up.

I was concerned at the beginning about the lack of precise details in the drawings and asked several times for detailed shop drawing before signing off on fabrication. They do no do more detailed drawings at any time. I based my ground preparation on the drawing and ended up with a gate that would not swing open wide enough to allow proper use. It was obvious that the direction of the gate swing (out vs. in) would have to be changed. NW asked for $400 to do it claiming that they needed to reconstruct the gate, move the hinges, ... I pointed out to them that the only thing that would have to be changed is two small metal tabs that the installation crew were going to weld on. This was correct but they stuck with the 400 quote expecting me to take it. I told them 'no', I'd do it myself. I did it myself after spending $50 to rent a welder for an hour. I did make assumptions about the gate based on their hand drawing so some fault is mine. But to try to stick it to me when they contributed to the error left a very bad taste in my mouth. Beyond that, there was a comedy of minor construction errors that I had to have the crew come back and fix. Finials were the wrong size, a dozen minor touch ups were required, ... I could see that the crew was not given time to do the job adequately and was being hassled by their management. I think that they were perfectly competent but rushed by the company. I like the fence, it wasn't a horrible experience but I would go with someone else the next time around.

Description of Work
I selected NW to do an extension of my existing steel fence. Their price was substantially better based on their 'shop-fabbed' as opposed to site-built construction method. The quoting process was reasonable and the salesman knew his material fairly well.

Honest and affordable concrete contractor. We specialize in flat work, this includes but is not limited to side walks, driveways, patios, concrete patch work, resurfacing, and specialty concrete. We work with all budgets  …

We are a family owned General Contractor business. We specialize in remodeling and concrete work. We pride ourselves on our reputation of great work ethic and trustworthy employees!  …

Please call (512) 402-8822 for a free on-site estimate. Or visit us on our website to fill out an estimate form. www.protexfenceandstain.com FB @protexfenceandstain We combine our expertise and commitment to quality with the best products and state of the art tools and equipment to offer unmatched services. We install all types of fencing, and stain (fences and decks). We have crews waiting to help you.  …

NORTHWEST FENCE & IRON is currently rated 4.6 overall out of 5.

No, NORTHWEST FENCE & IRON does not offer eco-friendly accreditations.

No, NORTHWEST FENCE & IRON does not offer a senior discount.

Are there any services NORTHWEST FENCE & IRON does not offer?