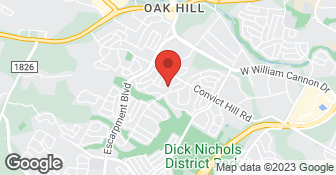 Aquatx Sprinkler is the repair division of JCs Irrigation. A professional licensed sprinkler repair service serving the Austin area. We take pride in helping our customers understand how to get the best use of their systems while conserving not only water but their hard earned cash. TCEQ STATE LICENSE # LI 0021618....

Had water leaking from the ground around one of the control valves and I couldn't find the leak. Called JCS and arranged an appointment. They didnt show for that one, but did call me to let me know that their truck had died and could they reschedule to a few days later. I said yes, and the following Tuesday they showed up at the scheduled time. After digging up the earth around the control valve they identified that one of the supply lines was leaking at an L joint. They suggested replacing the control valve at the same time, which I accepted. It took them a couple of hours to complete, but when they left the leak was gone, along with some advice regarding packing the dirt down over the next couple of days. It was a little more expensive than I was planning on, but at least the problem is fixed.

Issue was found very quickly and they then spent the next 20 minutes turning all all the zones on my system and making sure that the appropriate areas were being watered, minimizing any watering of the street and driveways.

Description of Work
I had a leaking master valve on the sprinkler system and couldnt find the cause of it, so called JCS. They came promptly later that afternoon and were right on time. They quickly found the issue (open bleed screw) and fixed it on the spot.

I have a home in Wells Branch. We had a bad leak in one sprinkler zone that was pouring water out into the yard. The zone was not working at all. I tried finding the leak myself but could not locate the source. Found AquaTX Sprinkler on Google with 1 review on Yelp (Laurie G.) and 4 on Angies List. All were top rated reviews. I called JC and he answered on the first ring, he was doing a big job in Dripping Springs ( a long ways from Wells Branch in North Austin) but said he would try to make it late that same evening. He called me back and told me he would not be able to make it but could come out first thing the next morning at 8am. He was very courteous and knowledgeable on the phone. He arrived exactly as he said at 8am. He has the right tools and the right knowledge and after some checking and quite a bit of digging he located the leak . Whoever installed the original system had not glued one of the fittings and it came off underground about 2 feet deep in clay. JC had all the correct parts and fixed it. After testing the system after the repair, he cleaned up and filled the large hole that had to be dug up. He quickly fixed another two of my sprinklers that also weren’t working correctly during the testing. I highly recommend JC and his company for your sprinkler needs. He was prompt, courteous and experienced. I am having him back out to completely review my system, and make any other necessary repairs and enhancements. Roy C

Mr. Stewart not only answered the phone on a Saturday evening but he came over to repair the system on Sunday morning. He also took the time to educate my husband and I on our irrigation system. He also made sure that all the other leaks were repaired. He also charged and extremely fair price considering it was a weekend call.

Description of Work
I had a leak in my irrigation system. You could hear the water gushing underground. I needed to have the leak repaired ASAP.

They were punctual and didn't waste time. J.C. answered all my phonecalls and called before arriving. He helped me move from room to room when I was in the way. I walk with a cane , so he carried all my belongings that I needed..They cleaned up after themselves each day they were here

Description of Work
removed all baseboards, cut out all sheetrock and insulation that was wet, put fans and industrial dehumidifier for 3 days take out the humidity Came back after 3 days and replaced the sheetrock and the insulation that had been removed. (whole house and garage) They went to home depot with chips of paint from 3 of my rooms and matched them. Put my baseboards back down and painted the new replacement spots

Description of Work
They located valves, wiring and pipes. Repaired leaks. Replaced valves and wiring. Installed pressure regulator and adjusted to the right pressure. These guy's are great!!! If you have irrigation needs and don't use these guy's you have missed out and paid to much. My system works better than it ever had in the past. My yard looks better and water bill is less than it has ever been. THANK YOU JC IRRIGATION.

Thank you for the kind review. We enjoyed working with you and are hopeful we can be of service in the future. Sincerely, JC Stewart III,
5.0

JC is very professional and honest. He will get the work done on time and stay to make sure everythingnis working great.

Thank you for choosing JC's Irrigation and the review. Your system was difinetly a challenge. New pools, decks and driveways can wreak havoc on even the best sprinkler system. Luckily for us, the other contractors working on your project were all professional and easy to work with. Coordinated timing on all our parts made this job go smoothly. It is always a pleasure when a plan comes together. Thank you sincerely, JC Stewart III

If you are looking for a general contractor in Austin, Texas, look no further than MassBur Construction. We provide remodeling, roofing, and rebuilding surfaces from water/ smoke/ fire damage. We guarantee your satisfaction and we won’t leave until the job is done right. We pride ourselves on the quality work we provide, while delivering great customer service! Check out our services offered and call or click to schedule a free estimate today!  …

Malco Electric, Inc. is a family owned and operated business since 1983. Randy Mallory is a Master Electrician with the expertise required to meet all your residential, commercial, and industrial electrical needs. 24 hour emergency service available. Free estimates are for homeowners only and do not include inspections.  …

If you need an electrical issue fixed that’s making you feel unsafe in your home, we’re on it. If you’re in the process of moving to a new home and you don’t have anyone to help you move all the big furniture, we’re on it. And not because we want something in return but because we want our clients to know that we are here for them for any reason. Not just electrical issues.  …

Licensed
All statements concerning insurance, licenses, and bonds are informational only, and are self-reported. Since insurance, licenses and bonds can expire and can be cancelled, homeowners should always check such information for themselves.To find more licensing information for your state, visit our Find Licensing Requirements page.
General Information
Free Estimates
No
Eco-Friendly Accreditations
Yes
Payment Options
Check
Emergency Service
Yes
Warranties
Yes

How is JCS Irrigation overall rated?

JCS Irrigation is currently rated 5 overall out of 5.

What days are JCS Irrigation open?

No, JCS Irrigation does not offer free project estimates.

Are warranties offered by JCS Irrigation?

What services does JCS Irrigation offer?