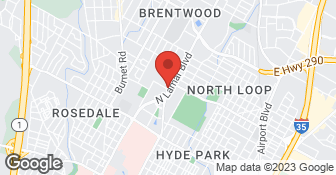 You seem determined to get a review from me about a place I don't recall ever having used. I frequently take my car to Dave's North location on Howard Lane, but you haven't ASKED me about it! This survey doesn't offer me an option to correct that! Dave's North has been good to me. I'm sure the Central shop is fine, but I haven't used it in memory. You're driving me crazy!!

Description of Work
I did not use the Central location!!!

They did it while I waited. I guess I was there about half an hour, and when they finished, it seemed to be running fine.

Description of Work
It was a very long time ago (June, actually), but my records indicate I went there for an oil change.

I think the fan malfunctioned or something. I had to get a new radiator and hoses. All of that had to be replaced. Dave's ultimate is one of the top companies. I found out about them through Angie's List. They always do great work. In all fairness, they did a lot of work and it took a lot of work to get it done. It wasn't cheap, but they do great work. I think the price was fair for all the work that was done. But I don't like paying $1700 to have my car repaired. They are a good company. For example if I had to change a flat tire or have a blinker fixed, they would do that for free. They do little stuff for free, so that when it comes to the big stuff, you would take your car over there. They won't cheat you. I just wasn't excited about paying $1700 to get my car fixed, that's why it's not an A. I'm Not in the sense that I thought they charged too much. I'm just never going to be happy about paying $1700 to have my car fixed. Other than that, I was happy with everything else. They do good quality. When they fix it, you never really have to worry about bringing it back because they overlooked something. I've never had any issues with it. Never had to bring it back for anything they've done. Never had to bring it back for a recheck or re-do. They always do it right the first time. They have a shuttle service, so you can drop the car off and they'll take you home or to work or where ever you need to go. It's a full service automotive company. I would assume they don't really have to cheat anybody. No need to cheat people when you've got good business. It's a good company. They're not up to nothing - they shoot straight. There was no issues with keeping the car longer than they said they would. They gave it to me, when they said they would give it to me. The shuttle service makes it convenient for you to drop the car off and they'll give you a ride where you need to go and then they'll come pick you up. It's really the only one that I use in this area.

They did a great job with this old car that carries my daughter and granddaughter. The grinding sound is gone now that the car has the new wheel bearing. When I picked up the car they explained all the work and answered my questions. They also gave me a 20% discount as a new customer ( I didn't have to ask). They also emailed a full status report on the car. I crosschecked the bill with some friends and also comparable on-line estimates for the same work. I am very pleased to do business with this company again and I certainly recommend them.

Description of Work
My daughter's 2007 Honda Civic needed an oil change and state inspection, but it was also making a grinding noise in front that sounded like a locomotive chugging, depending on the speed. I found Dave's Ultimate Auto on Angies's List and called for an appointment ASAP, they got me in within an hour on a busy Friday morning. In early afternoon they called with the bad news I expected: the right front wheel bearing was shot. It needed to be replaced for safety sake. I know if that bearing fails, wheel can seize up or wobble uncontrollably.

Very professional and easy to work with. I will definitely go back if I have any car repair needs.

It took them three hours to complete the job. The guy was fine. He was good. They itemized what they did and told me how each item cost. They were thorough and fast. The area was very clean.

Description of Work
I used Dave's Auto Services. They repaired my car. I needed work done on the brake and there were some other issues as well. It was a lot of work.

Their service is good, but there is a lot of up selling. They ended up recommending new tires, and struts. I got the tires, but did not get the struts.

Description of Work
I went here for an oil change.

The problem with the a/c was so extensive they took their time to diagnosis it properly. But the staff at Dave's made it as painless as possible. Essentially my entire a/c system had to be replaced, which was an unpleasant surprise. Once they informed me of the extensive issues with the a/c system, they were incredibly accommodating. Dave's not only provided me with a loner car while my car was in the shop, they took mine the same day I went in for diagnosis, and also gave me the name of another reputable shop that would be able to repair my exhaust problem at a lower rate. This was my first time in there and I have to say the entire staff was very helpful, friendly, and the employee that took care of me specifically helped me to lower the costs in whatever way he could. I must say that particularly as a woman, this shop was one of the better experiences I have had. I highly recommend them to anyone and their good reviews on Angies, Yelp, and AAA are definitely legit.

Great service, very flexible and prompt for an "emergency" window not rolling up. Creative of finding a solution for a Hummer part not available any longer.

Thank you so much for recognizing our efforts. We really appreciate the opportunity to serve you.
5.0

Went well. They did a thorough inspection and gave me an itemized breakdown of the condition of my car, including photos. I chose to do some, but not all, of the recommended work at that time, but plan to use them again in the future for the remaining work.

Description of Work
A variety of regular maintenance.

That's great! We really appreciate you putting your trust in us. Thank you for the detailed feedback.

Dave's Ultimate Automotive - Central is currently rated 4.8 overall out of 5.

No, Dave's Ultimate Automotive - Central does not offer a senior discount.

Are there any services Dave's Ultimate Automotive - Central does not offer?