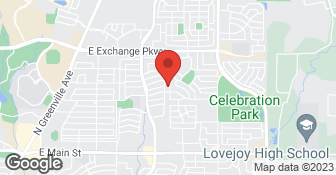 I have been in the heating and airconditioning service and sales for 30 years , this includes commercial and residential service. if you are looking for some with honesty to repair your equipment give me a call. I am owner of my company and when you call , you get me with the experience to solve your problems.

He was a rock star and it was a great service.

Description of Work
He replaced the entire heating air conditioner.

It was good, he was on time and honest person.

Description of Work
He replaced the circuit breaker for my airconditioner.

It was excellent. They were efficient, they did a good job in a timely manner and it was great.

Description of Work
They installed a new air conditioner.

I was very pleased with them and not a problem at all. They were very honest, very hard worker and they very meticulous to make sure that everything is working correctly.

Description of Work
He installed a new heating and air conditioning unit for me.

Dennis is an outstanding HVAC repairman. Trustworthy and honest. He stands by his work!

Without a doubt the best decision I've made in a long time was to contact Dennis Moon to come look at the units. It was on a Saturday evening around 7:00pm, and when we got home it was 87 degrees in our bedroom. I called the company that installed the units, but I felt that they saw an opportunity to take advantage of the situation I was in, and the prices they quoted were out of line in my opinion. The straw that broke the camel's back was that they refused to confirm the appointment unless I gave them a credit card in advance. I declined, and went to Angie's List to look for a solution. 10 minutes later I get a call from Dennis Moon, and he said he could be there within 30 minutes, and he beat that. The guy worked in our incredibly hot attic for close to 2.5-3 hours, kept coming out to let me know where he was, and then surprisingly, I hear him closing the attic stairs, and he proclaims it fixed. Long story short, this guy knows his stuff! Quick response, no overtime surcharge for a weekend call, and the final bill was less than the installing company wanted for just the service call. I highly recommend, if you need heating and air conditioning service that you reach out to Dennis Moon's Heating and Air Conditioning Service. You won't be disappointed!

When it comes to HVAC solutions, at TemperaturePro we strive to deliver an exceptional customer experience at every stage of the process. We understand life is busy and equipment breakdowns are a hassle, but we’ve got you covered–because being comfortable in your home and breathing clean air should be the last thing on your mind. The TemperaturePro mission is to deliver transparent HVAC solutions conveniently with professional business expertise. Expect different. Expect extra. Because we are–because you deserve it.  …

We service , repair and or replace all types and brands of heating and air conditioning equipment. We offer free estimates, service agreements as well as preventive maintenance services and even duct cleaning repair or replacement. We guarantee all our work 100% and offer fair prices. Financing available.  …

Dennis Moon Heating & Airconditioning is currently rated 5 overall out of 5.