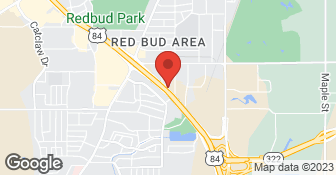 ServiceMaster by A-Town Hi-Tech provides 24 hour emergency restoration services as well as a wide variety of cleaning services in Abilene, Texas and surrounding areas. We pride ourselves on high quality and friendly service. We are an accredited member of the Better Business Bureau, with an A+ rating

75% of the time the tech was asking me to obtain more services.

The chairs came from my mother's home where there were two smokers and had yellowed and smelled of smoke. I took the chairs to A-Town Hi-Tech and they put them in an Ozone Chamber(?) to rid them of the odor and then they cleaned them real good. They achieved all that I hoped they would be able to.

The Servicemaster fellows kept in contact with us regarding their appointment, were prompt, courteous, and did a great job. They explained every aspect of the service provided and gave us information regarding further maintenance needs and scheduling. They were professional in appearance and demeanor and did a great job. Definitely will use their services again.

I used them 3 or 4 months ago. They don't cut corners, they were nice. They well get out pretty much any stain that you have, and they won't cheat you.

It didn’t start off very well. The first time they cleaned it, it left white marks when he laid it. It took them about 3-4 trips back to finally to get the carpet clear. The cleaning itself was good but I think their machine was not working correctly and left much water in the carpet the first time. They continued until they got it corrected. I don’t think they wanted to buy a new carpet. It was the second time I used them, and will use them again. I am not real sure that the guy that came knew what he was doing, but the second guy did, and it may have been the fault of the equipment. Finally, the manager, who was an older guy and had been with them for a long time, was the one who got it corrected. It was just one room. I had bought a coupon on Groupon to clean one room. If there is a problem, they will stick with me until they get it completed. I had a bad spot last year and it took them a couple of times to come back to get the spot out. It looked clean when they cleaned it but it came back as it dried. They came back two times, and the third time, the spot did not show. I really didn’t have any bad spots this year, and other than their faulty equipment and I know that they came back at least four times to work on it. So, my experience has been positive. They are polite. They come when they say they will come. I will definitely use them again next year. The price was good with the coupon and I don’t really know how much it costs regularly. I probably wouldn’t have used them again if they hadn’t kept coming back to get it fixed.

Description of Work
Shampoo the carpets.

The individuals that came were very professional. They cleaned out the utility room so they could get to the dryer and put it all back in place as they found it. Todd not only got on the roof and worked down, but he also kept all the lint they removed to show me how much there was (I asked to see it). He ALSO helped me uninstall some programs on my computer as I was frustrated and didn't know how to do it when he came in to have me finalize the bill! I would definitely recommend them for this service in the future.

Description of Work
Cleaned out dryer vent as dryer was not drying properly and we had not had it done in the 12 years we have lived here.

Description of Work
Cleaned carpet, moved furniture, and volunteered to come back and help me replace some heavy items after carpet dried.

Service professional arrive early which was great for us. He explained all solutions he was using on carpet. He provided paper work for all solutions used and A-town brochure of services provided. Next, he clean carpet. Carpet looked beautiful after he finished. Next, he gave receipt with military discount. Also, received 1 br carpet cleaning free for toys for tots donation.

Thank you [removed members name] for your glowing review. I preach to all of Technicians to undersell and over deliver. I really take pride in my people. I'm glad we delivered a great job for you. Tell your friends, it is our best advertisement. Merry Christmas. Gary
5.0

I was very impressed with A-Town Hi-Tech from start to finish. It was easy to make a convenient appointment and Eileen from A-Town called to confirm my appointment the day before we were scheduled. Shawn arrived at my home at 8:30am on the dot. He was very courteous and explained everything he was going to do. He even wore booties over his shoes while in my home, which was a nice touch. He got out two bad carpet stains we had by the entryway. After he was done, the carpet looked AMAZING- it looks like new carpet now. My only "complaint" is that I need to have A-Town Hi-Tech back out to clean the carpet in the other bedrooms. It looks so dirty now compared to my newly cleaned carpet! :) We were very pleased and wouldn't hesitate to recommend A-Town Hi-Tech for their services. They will be coming back out this week to clean our air ducts and dryer vents.

Description of Work
I got a Groupon for $49.00 to clean two rooms of carpet and paid an additional $15 for the hallway carpet cleaning. A-Town Hi-Tech cleaned our living room, dining room, and hall carpet. We also paid an extra $49 to have the carpet Scotchgarded since these are high-traffic areas for us.

Thanks [member name removed]. We always try our best, and guarantee our work. Don't forget we clean wood floors along with tile and grout as well
5.0

We were very pleased with their professsionalism and determination to clean the carpet until we were pleased. We were not charged for the second trip. We will use them again.

Description of Work
Cleand living room carpet. There were a couple of bad stains that were specifically treated. After the carpet dried the stains were not completely gone. I called and they promptly came back and treated the spots again. This time the spots were removed.

Thanks [removed member name]. We always want satisfied and happy customers. Sometimes a stain is not a spot and some stains "stay in" but we will always come back and re-try if anyone is not satisfied.
5.0

They are very good. I was unhappy with the stairs because they were still dirty. They came back out and cleaned them again with heavier cleaners at no charge.

Description of Work
They cleaned the carpets on the stairs and in the bedroom.

Abilene Carpet Cleaning has over 20 years experience. We are a professional company With professional equipment and look forward to serving you. Give me a call or click for an estimate today!  …

How is Servicemaster by A-Town Hi-Tech overall rated?

Servicemaster by A-Town Hi-Tech is currently rated 4.8 overall out of 5.

What days are Servicemaster by A-Town Hi-Tech open?

Servicemaster by A-Town Hi-Tech is open:

What payment options does Servicemaster by A-Town Hi-Tech provide

Does Servicemaster by A-Town Hi-Tech offer a senior discount?

No, Servicemaster by A-Town Hi-Tech does not offer a senior discount.

Are warranties offered by Servicemaster by A-Town Hi-Tech?

No, Servicemaster by A-Town Hi-Tech does not offer warranties.

What services does Servicemaster by A-Town Hi-Tech offer?

Are there any services Servicemaster by A-Town Hi-Tech does not offer?