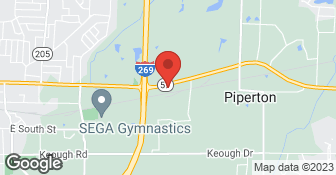 We were very impressed with the quality of the work and the materials that were used. Everyone we worked with was professional and friendly, and they did exactly what we wanted. I would use them again!

Description of Work
We had new granite and soapstone countertops installed in our kitchen.

Description of Work
Granite & Marble Services did an absolutely excellent job on the installation of granite on my raised bar and my powder room cabinet. The technician who came out to do the measurements for the install had the workers who built the raised bar to come back and make sure the bar was level. He pointed out exactly what they needed to do and they did just that. My bar is beautiful. I was very lucky to find granite that is very very close |to what I have. The key was the way the stone was cut that made the difference in the two stones hardly noticeable unless told so. Most importantly, I only had to pay for the square footage that I used as opposed to paying for the entire slab, which is what most companies want to charged me for. This is an excellent company. Very very meticulous and careful measurement and installation. My bar looks amazing and I am, indeed, a satisfied customer.

DO NOT CHOOSE THIS COMPANY! We originally picked this company because they had above average reviews and they quoted us a fair price for granite installation. During the removal process of our countertops they ripped off a large piece of sheet rock exposing our pipes behind our kitchen sink. They stated they would fix it when they came a few days later to install the granite so we were not too concerned. Also during the counter/sink removal process they claimed they turned off our water, but when the installers returned 3 days later they discovered a slow leak that had seeped into our cabinets and under our hardwood floors. No one, including the companies’ contracted plumber, could give us an explanation for the leak. To make matters worse the installers did not fully fix the exposed sheet rock they had promised to fix days earlier. We contacted the company that night and sent videos and pictures of the damage. The next day after 2 pm the companies’ owner (Julie) called me to basically inform me that the leak was not her companies fault and I had to file a house claim. She seemed apologetic at the time of the phone call, and stated that the company would do what they could to help because they were a family-owned company who puts their customers first. The only other time I was contacted by the company after that conversation was a few days later requesting final payment for their services. I tried to call Julie again on the phone and she never returned my phone calls, she only responded back via text. The sheet rock they ripped out had not been fully repaired and Julie text that her installers would contact us that day, they never did. Not only did we have to pay our backsplash guy extra to fix our walls, but the company also installed our cooktop crooked. After all of this we had to file a house claim totaling more than $18,000 worth of floor damage from this “mysterious” leak that no one could ever give us a clear answer of the cause. A month and a half after getting the granite installed, our house is still under construction from the floor damage and we have not heard from the company apologizing for anything. DO NOT CHOOSE THIS COMPANY! The owners seem to not care about their customers but only care about your money and if damage occurs their advice will be to file a house claim.

It went well. This was the second job that this company performed for me. They did a very good job both times. The only downside to working with them is that they are so good at what they do relative to their competition that it takes quite a while to obtain an appointment with them. They are worth the wait.

Description of Work
Removed, trimmed, and returned a granite counter top to its position.

Description of Work
They installed a white marble vanity top, pony wall top, trim around the shower, and threshold surrounds. I had finally found a piece of remnant white marble with a lot of gray veining at their shop. The price was comparable to other places for white marble, but they're the only one who had this particular marble and as a remnant. They were able to work with it such that all pieces were able to be cut from the same piece of marble. It was close! | The installers were excellent, and the fabricators were excellent. One thing that was unique about this company was they provided a written contract with all the measurements outlined, the edge noted, and any special instructions we had discussed. The 3 other companies I had shopped did not provide contracts as a matter of course, only an invoice with total sq ft mentioned and a general description of the job. I am a detail person, so I appreciated their details in all aspects of the job. Great people! Great work! |

I had an excellent experience with them. They did a good job. I thought the price was reasonable. They were prompt and maintained the schedule of installation. Everything was fine.

Description of Work
I have used the services of Granite & Marble Service LLC.

They were very helpful in picking out the granite piece we liked. The guys who measured and installed it were on time and friendly. We thought the price was a little high for a 6 ft remnant, but overall they did an excellent job.

Description of Work
I used GRANITE AND MARBLE SVC LLC

They were excellent. Their prices were reasonable.

Description of Work
I used Granite & Marble Svc LLC to remodel my kitchen.

HCCI is a full service self performing, licensed General Contractor, with over 30 years experience in Commercial and Residential Construction and Maintenance. We offer outstanding Quality and Professionalism along with cost effective methods in order to complete your project on time and in budget!  …

Welcome to Paul’s Tile Expert, professional tile installation company in Memphis, TN. We strive to make every job perfect with artistry and execution. Paul’s Tile specializes in working with contractors and remodelers in the Memphis, TN area. We know you are on a timeline and you need to stay on budget. At Paul’s Tile we are dedicated to our customers needs and pride ourselves on cleanliness, customer relations and meeting deadlines. We provide quality service at competitive rates. At Paul’s Tile, it’s also our proven process that ensures complete accountability. When the people doing the work are accountable to you, the job is going to get done. And it’s going to get done right – the first time. We take great pride in every tile we lay, and every home or business we brighten. It’s what we do. And we’d like to do it for you. Residential & Commercial Perfection. That’s Paul’s Tiles. Award wining.  …

Sanchez Painting and Construction is a company that makes it possible to leave the work as professional as possible, We work in every area of Tennessee. Our Quality specifies in Residential and Commerical for Interior and Exterior.  …

Kitchen and Bath Remodeling
Marble and Granite
Countertops and Backsplashes

GRANITE & MARBLE SVC LLC is currently rated 4.5 overall out of 5.

No, GRANITE & MARBLE SVC LLC does not offer eco-friendly accreditations.

No, GRANITE & MARBLE SVC LLC does not offer a senior discount.